From Infogalactic: the planetary knowledge core
Jump to: navigation, search
This article is about the antlers of deer and related species. For other uses, see Antler (disambiguation). 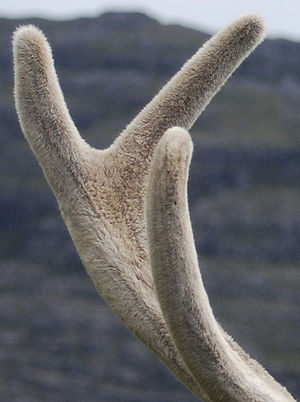 An antler on a red deer stag. Velvet covers a growing antler, providing blood flow that supplies oxygen and nutrients.

Antlers are extensions of the skull grown by members of the deer family. They are true bone structures that usually grow in symmetrical pairs. In most species, only the male grows antlers and their primary function is to increase his likelihood of sexual selection by attracting females or helping him fight other males. In many temperate zone species, antlers are shed and regrown each year.

Antler comes from the Old French antoillier (see present French : "Andouiller", from ant-, meaning before, oeil, meaning eye and -ier, a suffix indicating an action or state of being)[1][2] possibly from some form of an unattested Latin word *anteocularis, "before the eye"[3] (and applied to the word for "branch"[4] or "horn"[2]). 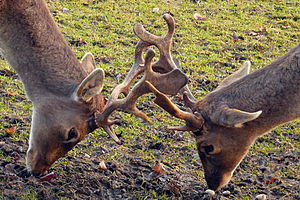 Antlers are unique to cervids and found mostly on males: only reindeer (known as Caribou in North America) have antlers on the females, and these are normally smaller than those of the males. Nevertheless, fertile does from other species of deer have the capacity to produce antlers on occasion, usually due to increased testosterone levels.[5] The "horns" of a pronghorn (which is not a cervid but a giraffoid) meet some of the criteria of antlers, but are not considered true antlers because they contain keratin.[6]

Each antler grows from an attachment point on the skull called a pedicle. While an antler is growing, it is covered with highly vascular skin called velvet, which supplies oxygen and nutrients to the growing bone.[7] Antlers are considered one of the most exaggerated cases of male secondary sexual traits in the animal kingdom,[8] and grow faster than any other mammal bone.[9] Growth occurs at the tip, and is initially cartilage, which is later replaced by bone tissue. Once the antler has achieved its full size, the velvet is lost and the antler's bone dies. This dead bone structure is the mature antler. In most cases, the bone at the base is destroyed by osteoclasts and the antlers fall off at some point.[7] As a result of their fast growth rate, antlers are considered a handicap since there is an immense nutritional demand on deer to re-grow antlers annually, and thus can be honest signals of metabolic efficiency and food gathering capability.[10] 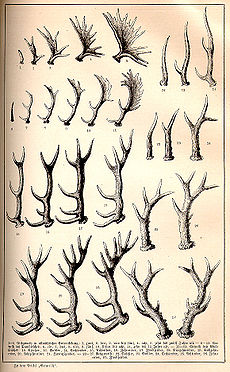 In most arctic and temperate-zone species, antler growth and shedding is annual, and is controlled by the length of daylight. Although the antlers are regrown each year, their size varies with the age of the animal in many species, increasing annually over several years before reaching maximum size. In tropical species, antlers may be shed at any time of year, and in some species such as the sambar, antlers last several years. Some equatorial deer never shed their antlers.[7] Antlers function as weapons in combats between males, which sometimes cause serious wounds, and as dominance and sexual displays.[9]

The ancestors of deer had tusks (long upper canine teeth). Antlers appear to replace tusks; two modern species, the musk deer and the water deer, have tusks and no antlers, the muntjac has small tusks and small antlers, and other deer have full-sized antlers and no tusks.[7] The diversification of antlers, body size and tusks has been strongly influenced by changes in habitat and behavior (fighting and mating).[11]

Reindeer use their antlers to clear away snow so they can eat the vegetation underneath. This is one possible reason that females of this species evolved antlers.[7] Another possible reason is for female competition during winter foraging.[11]

In moose, antlers may act as large hearing aids. Moose with antlers have far more sensitive hearing than moose without, and a study of trophy antlers with an artificial ear confirmed that the antler behaves like a parabolic reflector.[12] 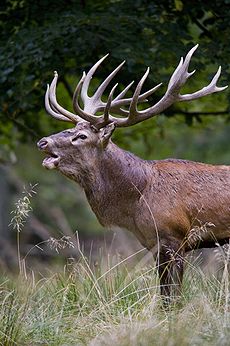 The principal means of evolution of antlers is sexual selection, which operates via two mechanisms: male-to-male competition (behaviorally, physiologically) and female mate choice.[8] Male-male competition can take place in two forms. First, they can compete behaviorally where males use their antlers as weapons to compete for access to mates; second, they can compete physiologically where males present their antlers to display their strength and fertility competitiveness to compete for access to mates.[8] Males with the largest antlers are more likely to obtain mates and achieve the highest fertilization success due to their competitiveness, dominance and high phenotypic quality.[8] Whether this is a result of male-male fighting or display, or of female choosiness differs depending on the species as the shape, size, and function of antlers vary between species.[11]

There is evidence to support that antler size influences mate selection in the red deer, and has a heritable component. Despite this, a 30-year study showed no shift in the median size of antlers in a population of red deer.[13] The lack of response could be explained by environmental covariance, meaning that lifetime breeding success is determined by an unmeasured trait which is phenotypically correlated with antler size but for which there is no genetic correlation of antler growth.[13] Alternatively, the lack of response could be explained by the relationship between heterozygosity and antler size, which states that males heterozygous at multiple loci, including MHC loci, have larger antlers.[14] The evolutionary response of traits that depend on heterozygosity is slower than traits that are dependent on additive genetic components and thus the evolutionary change is slower than expected.[14] A third possibility is that the costs of having larger antlers (resource use, and mobility detriments, for instance) exert enough selective pressure to offset the benefit of attracting mates; thereby stabilizing antler size in the population.

Antlered heads are prized as trophies—the bigger, the better. The first organization to keep records of sizes was Rowland Ward Ltd., a London taxidermy firm, in the early 20th century. For a time only total length or spread was recorded. In the middle of the century, the Boone and Crockett Club and the Safari Club International developed complex scoring systems based on various dimensions and the number of tines or points, and they keep extensive records of high-scoring antlers.[15] Deer bred for hunting on farms are selected based on the size of the antlers.[16]

In Yorkshire in the United Kingdom roe deer hunting is especially popular due to the large antler produced there. This is due to the high levels of chalk in Yorkshire. The chalk is high in calcium which is ingested by the deer and helps growth in the antlers.[18] 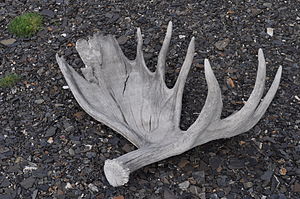 A shed moose antler in Denali National Park and Preserve (2010)

Gathering shed antlers or "sheds" attracts dedicated practitioners who refer to it colloquially as shed hunting, or bone picking. In the United States, the middle of December to the middle of February is considered shed hunting season, when deer, elk, and moose begin to shed. The North American Shed Hunting Club, founded in 1991, is an organization for those who take part in this activity.[19]

In the United States sheds fetch around US$10 per pound, with larger specimens in good condition attracting higher prices. The most desirable antlers have been found soon after being shed. The value is reduced if they have been damaged by weathering or being gnawed by small animals. A matched pair from the same animal is a very desirable find but often antlers are shed separately and may be separated by several miles. Some enthusiasts for shed hunting use trained dogs to assist them.[20] Most hunters will follow 'game trails' (trails where deer frequently run) to find these sheds or they will build a shed trap to collect the loose antlers in the late winter/early spring.

In most US States, the possession of or trade in parts of game animals is subject to some degree of regulation. But the trade in antlers is widely permitted.[21] In the national parks of Canada, the removal of shed antlers is an offense punishable by a maximum fine of $25,000 CAD. A reason for making this an offense is that removing shed antlers can deprive small animals of a valuable nutrient source (see Ecological role).[22] 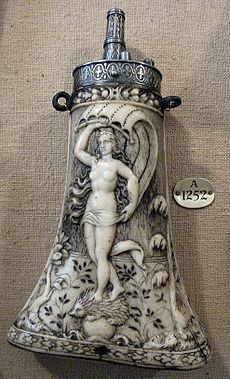 Antler has been used through history as a material to make tools, weapons, ornaments, and toys.[23] It was an especially important material in the European Late Paleolithic, used by the Magdalenian culture to make carvings and engraved designs on objects such as the so-called Bâton de commandements and the Bison Licking Insect Bite. In the Viking Age and medieval period, it formed an important raw material in the craft of comb-making. In later periods, antler - used as a cheap substitute for ivory - was a material especially associated with equipment for hunting, such as saddles and horse harness, guns and daggers, powder flasks, as well as buttons and the like. The decorative display of wall-mounted pairs of antlers has been popular since medieval times at least.[citation needed]

Antler headdresses were worn by shamans and other spiritual figures in various cultures, and for dances; 21 antler "frontlets" apparently for wearing on the head, and over 10,000 years old, have been excavated at the English Mesolithic site of Starr Carr. Antlers are still worn in traditional dances such as Yaqui deer dances and carried in the Abbots Bromley Horn Dance.[citation needed]

Through history large deer antler from a suitable species (e.g. red deer) were often cut down to its shaft and its lowest tine and used as a one-pointed pickax.[24][25]

In the velvet antler stage, antlers of elk and deer have been used in Asia as a dietary supplement or alternative medicinal substance for more than 2,000 years.[26] Recently, deer antler extract has become popular among Western athletes and body builders because the extract, with its trace amounts of IGF-1, is believed to help build and repair muscle tissue, however, one double-blind study did not find evidence of intended effects.[27] [28]

Discarded antlers represent a source of calcium, phosphorus and other minerals and are often gnawed upon by small animals, including squirrels, porcupines, rabbits and mice. This is more common among animals inhabiting regions where the soil is deficient in these minerals. Antlers shed in oak forest inhabited by squirrels are rapidly chewed to pieces by them.[19][29]