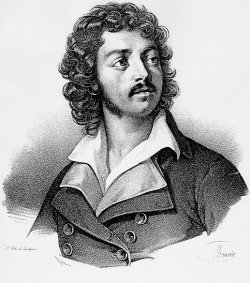 Antoine Christophe Merlin (13 September 1762 in Thionville, Moselle – 14 September 1833) was a member of several legislative bodies during the era of the French Revolution. He is usually called "Merlin de Thionville" ("Merlin of Thionville") to distinguish him from Philippe-Antoine Merlin de Douai.

He was born at Thionville, the son of a procureur in the bailliage of Thionville. After studying theology, he began a career in law, and in 1788 was an avocat at the parlement of Metz. In 1790 he was elected municipal officer of Thionville, and was sent by the department of Moselle to the Legislative Assembly. On 23 October 1791 he moved and carried the institution of a committee of surveillance, of which he became a member. It was he who proposed the law sequestrating the property of the émigrés, and he took an important part in the émeute of 20 June 1792 and in the revolution of 10 August of the same year.

He was elected deputy to the National Convention, and pressed for the execution of Louis XVI, but a mission to the army prevented his attending the trial. He displayed great bravery in the defence of Mainz. He took part in the Thermidorian Reaction which followed the fall of Robespierre, sat in the Council of Five Hundred under the Directory, and at the coup d'état of the 18th Fructidor (4 September 1797) demanded the deportation of certain republican members. In 1798 he ceased to be a member of the Council of Five Hundred, and was appointed director-general of posts, being sent subsequently to organize the army of Italy. He retired into private life at the proclamation of the Consulate, and lived in retirement under the Consulate and the Empire.