From Infogalactic: the planetary knowledge core
Jump to: navigation, search
For other members of the family, see De Jussieu. 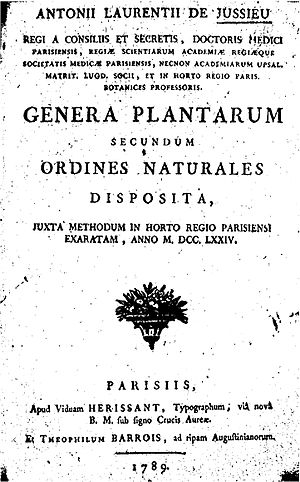 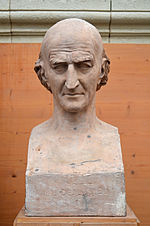 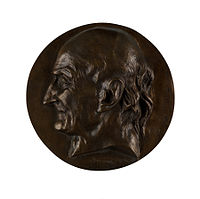 Medallion of Jussieu by David d'Angers

Antoine Laurent de Jussieu (12 April 1748 – 17 September 1836) was a French botanist, notable as the first to publish a natural classification of flowering plants; much of his system remains in use today. His classification was based on and extended unpublished work by his uncle, the botanist Bernard de Jussieu.

Jussieu was born in Lyon. He went to Paris to study medicine, graduating in 1770. He was professor of botany at the Jardin des Plantes from 1770 to 1826. His son Adrien-Henri also became a botanist.

In his study of flowering plants, Genera plantarum (1789), Jussieu adopted a methodology based on the use of multiple characters to define groups, an idea derived from Scottish-French naturalist Michel Adanson. This was a significant improvement over the "artificial" system of Linnaeus, whose most popular work classified plants into classes and orders based on the number of stamens and pistils. Jussieu did keep Linnaeus' binomial nomenclature, resulting in a work that was far-reaching in its impact; many of the present-day plant families are still attributed to Jussieu. Morton's 1981 History of botanical science counts 76 of Jussieu's families conserved in the ICBN, versus just 11 for Linnaeus, for instance. Writing of the natural system, Sydney Howard Vines remarked

"The glory of this crowning achievement belongs to Jussieu: he was the capable man who appeared precisely at the psychological moment, and it is the men that so appear who have made, and will continue to make, all the great generalisations of science."[1]

In 1788, he was elected a foreign member of the Royal Swedish Academy of Sciences. He was a member of the Masonic Lodge, Les Neuf Sœurs.

The system of suprageneric nomenclature in botany is officially dated to 4 Aug 1789 with the publication of the Genera Plantarum (Gen. Pl.).[2]

The standard author abbreviation Juss. is used to indicate this individual as the author when citing a botanical name.[3]