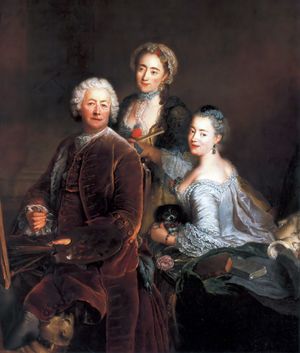 Portrait of the Painter with his daughters, Gemäldegalerie Berlin

Antoine Pesne (French pronunciation: ​[pɛːn]) (29 May 1683 – 5 August 1757) was a French-born court painter of Prussia. Starting in the manner of baroque, he became one of the fathers of rococo in painting.

Born in Paris, Pesne first studied art under his father and uncle. From 1704 to 1710 he received a stipend for advanced training at the Académie Royale in Italy. In 1710, he was called to Berlin by King Frederick I of Prussia.

As the director of the Berlin Academy of the Arts from 1722, Pesne became famous through his portraits of the Prussian royal family and their household. Many of his portraits hang in Berlin Museums and in Charlottenburg Palace. These include (among others) his portraits of the first two kings of Prussia, Frederich I and Frederick William I, and members of the latter's family.

In St. Agnus Church in Köthen, where J. S. Bach was music director (Kapellmeister), there is a huge portrait of the donor Gisela Agnes, Princess of Anhalt-Köthen, painted by Pesne in 1713. The ceiling paintings in Charlottenburg, Rheinsberg, and Sanssouci Palaces are at least partially his work.

In 1746 Pesne received from king Frederick II property and construction material to erect a house at Oberwallstraße 3 in Berlin, where he lived until his death in 1757. His grave is preserved in the Protestant Friedhof I der Jerusalems- und Neuen Kirchengemeinde (Cemetery No. I of the congregations of Jerusalem's Church and New Church) in Berlin-Kreuzberg, south of Hallesches Tor.