Anton Szandor LaVey[1] (born Howard Stanton Levey; April 11, 1930 – October 29, 1997) was an American author, carnival and circus performer, musician and occultist. He was the founder of the Church of Satan and the religion of LaVeyan Satanism. He authored several books including The Satanic Bible, The Satanic Rituals, The Satanic Witch, The Devil's Notebook, and Satan Speaks!. He released three albums, The Satanic Mass, Satan Takes a Holiday, and Strange Music.

LaVey was labeled many things by journalists, religious detractors and Satanists alike, including "The Father of Satanism",[2] the "St. Paul of Satanism", [3] "The Black Pope",[4] and the "evilest man in the world".[5]

LaVey was born as Howard Stanton Levey in Chicago, Illinois. His father, Michael Joseph Levey (1903–1992), from Chicago, Illinois married LaVey's mother, the former Gertrude Augusta Coultron who was born to a Russian father and Ukrainian mother who had immigrated to Ohio in 1893; both became naturalized American citizens in 1900. LaVey's family moved to California, where he spent his early life in the San Francisco Bay Area. His parents supported his musical interests, as he tried a number of instruments; his favorites were keyboards such as the pipe organ and the calliope. He did covers of instrumentals like Harlem Nocturne by Earle Hagen.[6]

He attended Tamalpais High School in Mill Valley, California, until the age of 16.[7][8] According to his biography, he left high school to join a circus and later carnivals, first as a roustabout and cage boy in an act with the big cats, then as a musician playing the calliope. LaVey later claimed to have seen that many of the same men attended both the bawdy Saturday night shows and the tent revival meetings on Sunday mornings, which reinforced his increasingly cynical view of religion. In the foreword to the German version of The Satanic Bible, he cites this as the impetus to defy Christian religion as he knew it. He explains why church-goers employ double moral standards.[9]

His "genius" on keyboards later garnered him work as an organist in bars, lounges and nightclubs.[10] While playing organ in Los Angeles burlesque houses, he allegedly had a brief affair with then-unknown Marilyn Monroe when she was a dancer at the Mayan Theater. This is challenged by those who then knew Monroe, as well as the manager of the Mayan, Paul Valentine, who said she had never been one of his dancers, nor had the theater ever been used as a burlesque house.[11]

According to his biography, LaVey moved back to San Francisco, where he worked for three years as a photographer for the San Francisco Police Department (SFPD). He dabbled as a psychic investigator, looking into "800 calls" referred to him by the police department. Later biographers questioned whether LaVey ever worked with the SFPD, as there are no records substantiating the claim.[1][12] During this period, LaVey was friends with a number of writers associated with Weird Tales magazine; a picture of him with George Haas, Robert Barbour Johnson (whom he had met in the circus as an animal trainer and painter of carnival scenes) and Clark Ashton Smith appears in Blanche Barton's biography The Secret Life of a Satanist.

In 1950, LaVey met Carole Lansing and they married the following year. Lansing gave birth to LaVey's first daughter, Karla LaVey, born in 1952. They divorced in 1960 after LaVey became entranced by Diane Hegarty. Hegarty and LaVey never married; however, she was his companion for twenty-five years and mothered his second daughter, Zeena Galatea Schreck (née LaVey), in 1963.[13] At the end of their relationship, Hegarty sued for palimony.[14][15]

LaVey claimed to have acquired various books on ceremonial magic, such as the Grand Albert and the Sixth and Seventh Books of Moses, but was dissapointed that they were written from a Christian perspective.[16] Historian of satanism Gareth J. Medway claimed that LaVey had also been inspired by the novels of Dennis Wheatley as well as the books of Doreen Irvine.[17] LaVey claimed that he had searched for other Satanists prior to founding his Church, but that this search had been unsuccessful.[18]

Becoming a local celebrity through his paranormal research and live performances as an organist, including playing the Wurlitzer at the Lost Weekend cocktail lounge, he attracted many San Francisco notables to his parties. Guests included Carin de Plessin, Michael Harner, Chester A. Arthur III, Forrest J Ackerman, Fritz Leiber, Cecil E. Nixon and Kenneth Anger. LaVey formed a group called the Order of the Trapezoid, which later evolved into the governing body of the Church of Satan.[19] According to Faxneld and Petersen, the Church of Satan represented "the first public, highly visible, and long-lasting organisation which propounded a coherent satanic discourse".[20]

"Never one for theory, LaVey created a belief system somewhere between religion, philosophy, psychology, and carnival (or circus), freely appropriating science, mythology, fringe beliefs, and play in a potent mix. The core goal was always indulgence and vital existence, based on the devices and desires of the self-made man."

Per Faxneld and Jesper Petersen.[21]

LaVey began presenting Friday night lectures on the occult and rituals. A member of this circle suggested that he had the basis for a new religion. According to LaVey himself, on Walpurgisnacht, April 30, 1966, he ritualistically shaved his head, allegedly "in the tradition of ancient executioners", declared the founding of the Church of Satan and proclaimed 1966 as "the Year One", Anno Satanas—the first year of the Age of Satan (it was later demonstrated that LaVey in fact shaved his head because he lost a bet and made up the "ancient executioners" story after the fact[22]). Media attention followed the subsequent Satanic wedding ceremony of journalist John Raymond to New York City socialite Judith Case on February 1, 1967. The Los Angeles Times and San Francisco Chronicle were among the newspapers that printed articles dubbing him "The Black Pope". LaVey performed Satanic baptisms (including the first Satanic baptism in history for his three-year-old daughter Zeena, dedicating her to Satan and the Left-Hand Path, which garnered world-wide publicity and was originally recorded on The Satanic Mass LP)[23][24][25][26] and Satanic funerals (including one for naval machinist-repairman third-class Edward Olsen, complete with a chrome-helmeted honor guard), and released a record album entitled The Satanic Mass.[citation needed]

LaVey claimed that he had been appointed consultant to the film Rosemary's Baby, which revolved around a group of fictional satanists, and that he also had a cameo appearance in the film as the Devil, however critics have argued that none of this was true.[27]

Due to increasing visibility through his books, LaVey was the subject of numerous articles in the news media throughout the world, including popular magazines such as Look, McCall's, Newsweek, and TIME, and men's magazines. He also appeared on talk shows such as The Joe Pyne Show, Donahue and The Tonight Show, and in a feature-length documentary called Satanis in 1970. He would be credited for the mainstreaming of Satanism and witchcraft in the U.S. during the 1960s, 1970s and after.[citation needed]

In 1972 the public work at La Vey's Black House in San Francisco was curtailed and work was continued via "grottoes" or subsidiary branches of the Church of Satan located throughout the USA and some in other countries.[citation needed] During the 1970s, LaVey found himself in financial difficulty.[16] In the Churches' newsletter he announced that all higher degrees of initiation would be given in return for a financial contribution.[16] Many of the groups' priesthood were repelled by this act, seeing it as an act of hypocrisy.[16] In June 1975, there was a mass desertion of members from the Church of Satan, with many of the dissenters joining the Temple of Set, which had been founded by Michael Aquino.[32]

In July 1984, Diane issued a restraining order against LaVey, which he did not contest.[33]

In an article published in Rolling Stone magazine in 1991, the journalist Lawrence Wright revealed that through his own investigative work, he could find that many of LaVey's claims about his life had been untrue.[34]

LaVey's third and final companion was Blanche Barton. Barton and LaVey are the parents of Satan Xerxes Carnacki LaVey, born November 1, 1993. Barton succeeded him as the head of the Church after his death, and has since stepped down from that role and handed it to Magus Peter H. Gilmore.[citation needed] LaVey died in 1997.[34] Three months after his death, his estranged daughter Zeena LaVey Schreck and her husband Nikolas Shreck published a nine-page "fact sheet" in which they endorsed Wright's earlier allegations and claimed that many more of LaVey's stories about his life had been false.[34] 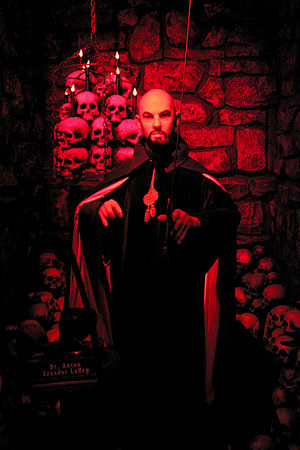 Anton LaVey died on October 29, 1997, in St. Mary's Medical Center in San Francisco of pulmonary edema.[35] He was taken to St. Mary's, a Catholic hospital, because it was the closest available. A secret Satanic funeral, attended by invitation only, was held in Colma after which LaVey's body was cremated.[7]

LaVey included references to other esoteric and religious groups throughout his writings, claiming for instance that the Yezidis and Knight's Templar were carriers of a Satanic tradition that had been passed down to the twentieth-century.[36] Scholar of Satanism Per Faxneld believed that these references were deliberately tongue-in-cheek and ironic, however noted that many Satanists who had read LaVey's writings had taken them to be literal historical claims about the past.[36][37] Although he regularly derided older esotericists, LaVey also relied upon their work; for instance making use of John Dee's Enochian system in The Satanic Bible.[38] Faxneld therefore believed that there was a tension in LaVey's thought between his desire to establish prestigious Satanic predecessors and his desire to be seen as the founder of the first real Satanic society.[39]

Dyrendel argued that LaVey partook in conspiracy culture, particularly as he grew older, for he was greatly concerned with modern society's impact on individual agency.[40]

LaVey supported eugenics and believed that it would be a necessity in future.[41]

LaVey was conservative in his attitude to law and order, and insisted that the Church abide by state law in all of its actions.[43]

Medway contrasted LaVey from the likes of Jim Jones, David Koresh, and Charles Manson, noting that whereas the latter were the charismatic leaders of apocalyptic communes, within the Church of Satan "no one hung onto [LaVey's] every word, and church members [were] allowed considerable autonomy."[44]

Academic scholars of Satanism Per Faxneld and Jesper Aa. Petersen described LaVey as "the most iconic figure in the satanic milieu",[21] while Asbjørn Dyrendel described him as "the founder of modern Satanism".[45] In his 2001 examination of Satanists, the sociologist James R. Lewis noted that, to his surprise, his findings "consistently pointed to the centrality of LaVey's influence on modern Satanism". As a result he "concluded that – despite his heavy dependence on prior thinkers – LaVey was directly responsible for the genesis of Satanism as a serious religious (as opposed to a purely literary) movement".[46]

His books The Satanic Bible and The Satanic Rituals, have been cited as having "an influence far beyond" the Church of Satan's membership.[42] In 1995, the religious studies scholar Graham Harvey noted that although the Church had no organized presence in Britain, LaVey's writings were widely accessible in British bookshops.[47]

Mark Kozelek describes an encounter with LaVey in his song "Hey You Bastards I'm Still Here".