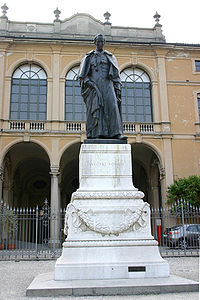 Antonio Rosmini Serbati was born 24 March 1797, at Rovereto, in the Austrian Tyrol. He studied at the University of Padua, and was ordained priest at Chioggia, 21 April 1821. In 1822 he received a Doctorate in Theology and Canon Law.[1]

During this time Rosmini formulated his "Principle of Passivity". Rosmini felt compelled to ask himself: Do my plans spring more from my own subjective desire to do good than from a desire to do the will of God?”. Reflecting in this way, Rosmini articulated the principle in two parts: be ready to undertake any work of charity but only so long as it is God’s Providence that presents it; in the meantime, immerse oneself in the commitment to continual conversion, seeking the amendment of one’s own life.[2]

The Institute of Charity

In 1828 he founded at Monte Calvario near Domodossola, a new religious community, the Institute of Charity, known generally since as the Rosminians. In the autumn of 1830 he inaugurated the observance of the rule at Calvario, and from 1834 to 1835 had charge of a parish at Rovereto. Later foundations followed at Stresa and Domodossola. The Constitutions of the institute were approved by presented to Pope Gregory XVI on 20 December 1838. The institute spread rapidly in England and Italy, and requests for foundations came from various countries.[1]

The members might be priests or laymen, who devoted themselves to preaching, the education of youth, and works of universal charity—material, spiritual and intellectual. They work in Italy, England, Ireland, France, Wales, New Zealand, Kenya, Tanzania, India, Venezuela, and the United States. In London they are attached to the historical Church of St Etheldreda, Ely Place, Holborn. In 1962, Rosmini College School for Boys was founded in Auckland, New Zealand by Father Catcheside.[3]

Rosmini was retained as a political advisor to the then government of Piedmont. In August 1848, he was sent to Rome by King Charles Albert of Piedmont to enlist the pope on the side of Italy as against Austria.[1] Rosmini was invited to serve in the Roman Curia of Pope Pius IX as prime minister of the Papal States. He participated in the intellectual struggle which had for its object emancipation from Austria, but as a trusted ecclesiastical advisor and diplomat he was not an initiator of the movement which ended in the freedom and unity of Italy. In fact, while eager for the deliverance of Italy from Austria, his aim was to bring about a confederation of the states of the country, which was to be under the control of the pope. Upon establishment of the Roman Republic, the Pontiff was forced to flee and became estranged from his former advisor in political matters. The tenuous political circumstances made it very difficult to reconcile the two men's differing projects: innovative social and juridical reforms, however modest, fell victim to the more pressing existential needs of defending the supremacy of the Church's temporal powers.[citation needed]

Rosmini's works, Of the five wounds of the Holy Church and The Constitution of Social Justice (see Works below), aroused great opposition, especially among the Jesuits, and in 1849 they were placed upon the Index.[4] Rosmini at once declared his submission and retired to Stresa on Lago Maggiore, where he died. Before his death he had the satisfaction of learning that the works in question were dismissed, that is, proclaimed free from censure by the Congregation of the Index. Twenty years later, the word dismissed (dimittantur) became the subject of controversy, some maintaining that it amounted to a direct approval, others that it was purely negative and did not imply that the books were free from error. Vincenzo Maria Gatti, the Dominican professor of theology at the College of Saint Thomas, the forerunner of the Pontifical University of Saint Thomas Aquinas and Master of the Sacred Palace, was instrumental in partially rehabilitating the works of Rosmini. In an article published in the "Osservatore romano" 16 June 1876 Gatti made clear that Pius IX did not intend the "dimittantur" as amounting to wholesale condemnation.[5] The controversy continued until 1887, however, when Pope Leo XIII condemned forty of Rosmini's propositions.

In 1998 he was named by Pope John Paul II in the encyclical Fides et Ratio as one of the greater Christian thinkers.

The most comprehensive view of Rosmini's philosophical standpoint is to be found in his Sistema filosofico, in which he set forth the conception of a complete encyclopaedia of the human knowable, synthetically conjoined, according to the order of ideas, in a perfectly harmonious whole. Contemplating the position of recent philosophy from John Locke to Georg Hegel, and having his eye directed to the ancient and fundamental problem of the origin, truth and certainty of our ideas, he wrote: "If philosophy is to be restored to love and respect, I think it will be necessary, in part, to return to the teachings of the ancients, and in part to give those teachings the benefit of modern methods" (Theodicy, a. 148). He examined and analysed the fact of human knowledge, and obtained the following results:

The Cause for Canonization

On 26 June 2006, Pope Benedict XVI signed a Decree of the heroic virtues, and hence declared Rosmini to be Venerable.[6] On 3 June 2007, Pope Benedict XVI authorized the promulgation of a decree approving Rosmini's beatification. On 18 November 2007 he was beatified in Novara, Italy.

The following have also been translated into English: