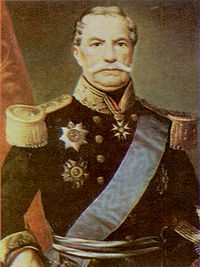 Antonios Kriezis (Greek: Αντώνιος Κριεζής) (1796–1865) was a captain of the Greek navy during the Greek War of Independence and a Prime Minister of Greece from 1849 to 1854. Kriezis originated from the Arvanite community of island of Hydra and was born in Troezen in 1796. In July 1821, he took part to the Greek expedition to Samos and in 1822 to the naval battle of Spetses. In 1825, he and Konstantinos Kanaris took part to a failed attempt to destroy the Egyptian navy inside the port of Alexandria. In 1828, John Capodistria placed him in command of a navy squadron and in 1829, he captured Vonitsa from the Ottomans. Under King Otto in 1836, he became Minister of Naval Affairs and later served as Prime Minister of Greece from December 24, 1849 until May 28, 1854. He was succeeded by Konstantinos Kanaris. He died in Athens in 1865.