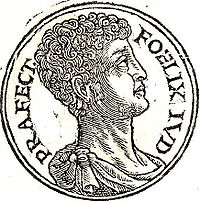 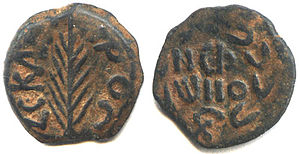 Marcus Antonius Felix (Felix in Greek: ο Φηλιξ, born between 5/10-?) was the Roman procurator of Iudaea Province 52-58, in succession to Ventidius Cumanus.

Felix was the younger brother of the Greek freedman Marcus Antonius Pallas. Pallas served as a secretary of the treasury during the reign of the Emperor Claudius. Felix was a Greek freedman either of Claudius, according to which theory Josephus (Antiq. xx. 7) calls him Claudius Felix, or for Claudius's mother Antonia Minor, a daughter of Triumvir Mark Antony to Octavia Minor and niece of Emperor Augustus. According to Tacitus, Pallas and Felix descended from the Greek Kings of Arcadia. Felix became the procurator by the petition of his brother.

Felix’s cruelty and licentiousness, coupled with his accessibility to bribes (see Book of Acts 24:26), led to a great increase of crime in Judaea. The period of his rule was marked by internal feuds and disturbances, which he put down with severity.

After Paul the Apostle was arrested in Jerusalem and rescued from a plot against his life, the local Roman chiliarch Claudius Lysias transferred him to Caesarea, where he stood trial before Felix. On at least one further occasion Felix and his wife Drusilla heard Paul discourse, and later on frequently sent for Paul and talked with him (Acts 24:24-26). When Felix was succeeded as procurator, having already detained Paul for two years, he left him imprisoned as a favor to the Jews (Acts 24:27).

On returning to Rome, Felix was accused of using a dispute between the Jews and Syrians of Caesarea as a pretext to slay and plunder the inhabitants, but through the intercession of his brother, the freedman Pallas, who had great influence with the Emperor Nero, he escaped unpunished. Porcius Festus succeeded him as procurator of Judea.

Felix married three times. His first wife was Drusilla of Mauretania the Elder, daughter of Cleopatra Selene II & Juba II of Numidia, and sister to Ptolemy of Mauretania. Drusilla of Mauretania the Elder is often confused with her niece, Drusilla of Mauretania the Younger, daughter of her brother Ptolemy of Mauretania and his mysterious wife Julia Urania. Felix' second wife was Drusilla of Judea, daughter of Herod Agrippa I & Cypros. Drusilla of Judea divorced Gaius Julius Azizus, King of Emesa to marry him. Felix and the Judean Drusilla, had a son, Marcus Antonius Agrippa, who died along with this Drusilla and many of the inhabitants of Pompeii and Herculaneum in the eruption of Mount Vesuvius on 24 August 79, and a daughter, Antonia Clementiana. The Judean Drusilla was one of only two major figures reported as dying in the eruption of Mount Vesuvius, the other being Pliny the Elder. Antonia Agrippina may have been a daughter from their son's marriage (this name was graffiti in a Royal Tomb in Egypt). Clementiana became a grandmother to a Lucius Anneius Domitius Proculus. Two possible descendants from this marriage are Marcus Antonius Fronto Salvianus (a quaestor) and his son Marcus Antonius Felix Magnus a high priest in 225. After the eruption, Felix married for a third time, but little is known about his third wife.