The Aosta Valley (Italian: Valle d'Aosta [ˈvalle daˈɔsta] (official) or Val d'Aosta (usual); French: Vallée d'Aoste [vale daɔst][4]/[vale dɔst][5] (official) or Val d'Aoste (usual); Arpitan: Val d'Outa) is a mountainous semi-autonomous region in northwestern Italy. It is bordered by Rhône-Alpes, France to the west, Valais, Switzerland to the north and the region of Piedmont to the south and east.

Covering an area of 3,263 km2 (1,260 sq mi) and with a population of about 128,000 it is the smallest, least populous, and least densely populated region of Italy. It is the only Italian region that has no provinces (the province of Aosta was dissolved in 1945).[6] Provincial administrative functions are provided by the regional government. The region is divided into 74 comuni (communes).

Italian and French are the official languages,[1] though much of the native population also speak Valdôtain, a dialect of Arpitan, as their home language; about half of the population can speak all three languages.[7]

The regional capital is Aosta.

The Aosta Valley is an Alpine valley which with its tributary valleys includes the Italian slopes of Mont Blanc, Monte Rosa, Gran Paradiso and the Matterhorn; its highest peak is Mont Blanc. 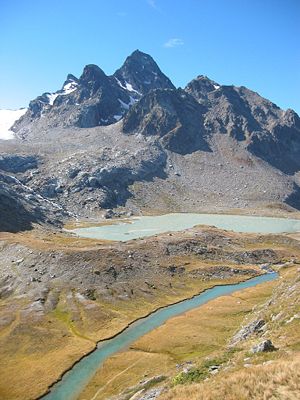 A view of La Thuile

The region is very cold in the winter, especially when compared with other places in the Western Alps. This is probably due to the mountains blocking the mild winds from the Atlantic Ocean. Places on the same altitude in France or western Switzerland are not as cold as the Aosta Valley.

The Aosta Valley may be divided into different climatic zones:[citation needed]

The Dora Baltea Valley, between 300 and 1000 metres above sea level, has the mildest climate in the Region, with a typical Oceanic climate (Cfb). The winters are mild, even milder than the Po Valley, but are usually wet and foggy. Snow is frequent only during January and February, but the foggy season, which starts in late October, lasts until May. The temperature average for January is between −1 °C (30 °F) and 3 °C (37 °F). The summers are mild and usually rainy. Temperature averages in July are between 17 °C (63 °F) and 20 °C (68 °F). The main towns in this area are Aosta, Saint-Vincent, Châtillon and Sarre. Due to the occidental position at the Alpine Arc, the climate classified as Cfb may extend to relatively high places, especially near the French border, which receives mild oceanic wind, so it’s possible to find locations at 1500, or even 1900 metres high with the same Cfb climate, but the temperatures are lower, around −2 °C (28 °F) in the winter and 15 °C (59 °F) in the summer, with mist throughout the year. 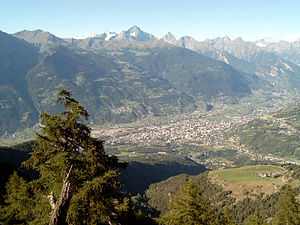 The valleys that lie around 1300 metres high, depending on the geomorphology, develop a Humid continental climate (Dfb), although with mild winter temperatures for this kind of climate, similar to the temperatures of the Norwegian fjords. Winter temperatures average around −3 °C (27 °F) or −4 °C (25 °F), and summers between 13 °C (55 °F) and 15 °C (59 °F). The snow season starts in November and lasts until March. Mist is common during the morning from April until October. The main communities in this area are Gressoney-Saint-Jean (averages of −4.8 °C (23.4 °F) in January and 13.8 °C (56.8 °F) in July), Brusson and Gressoney-La-Trinité.[citation needed] 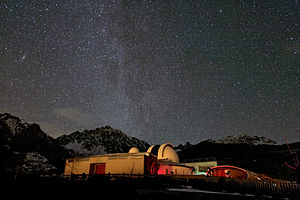 The Astronomical Observatory of the Aosta Valley.[8]

The valleys above 1600 metres usually have a Cold Continental Climate (Dfc). In this climate the snow season is very long, as long as 8 or 9 months at the highest points. During the summer, mist occurs almost every day. These areas are the wettest in the western Alps. Temperatures are low, between −7 °C (19 °F) and −3 °C (27 °F) in January, and in July between 10 °C (50 °F) and 13 °C (55 °F). In this area is the town of Rhêmes-Notre-Dame.,[9] which may be the coldest town in the Western Alps and where the winter average temperature is around −7 °C (19 °F). Other towns with this climate are Chamois, Breuil-Cervinia, Bionaz (sometimes mild) and Gressoney-La-Trinité (mild).

Areas between 2000 metres and 3500 metres usually have a Tundra Climate (ET), where every month has an average temperature below 10 °C (50 °F). This climate may be a kind of more severe Cold Oceanic Climate, with a low summer average but mild winters, sometimes above −3 °C (27 °F), especially near lakes, or a more severe Cold Continental Climate, with a very low winter average. Temperature averages in Pian Rosà, at 3400 metres high, are −11.6 °C (11.1 °F) in January and 1.4 °C (34.5 °F) in July. It is the coldest place in Italy where the climate is verifiable.[10]

In the past, above 3500 metres, all months were having an average temperature below freezing, with a Perpetual Frost Climate (EF). In recent years though there was a rise in temperatures. See as an example the data for Pian Rosà.[10] 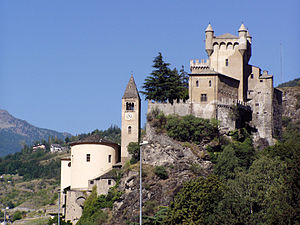 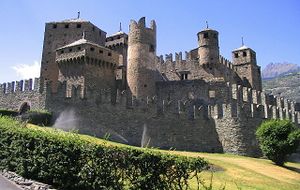 The first inhabitants of the Aosta Valley were Celts and Ligures, whose language heritage remains in some local placenames. Rome conquered the region from the local Salassi around 25 BC and founded Augusta Prætoria Salassorum (modern-day Aosta) to secure the strategic mountain passes, and they went on to build bridges and roads through the mountains. Thus, the name Valle d'Aosta literally means "Valley of Augustus".[11] After the Romans, the valley preserved traditions of autonomy, reinforced by its geographical isolation, though it was loosely held in turns by the Goths and then by the Burgundians in the 5th century, followed by the Franks, who overran the Burgundian kingdom in 534. It was also ruled by the Byzantines between 553 and 563 and then by the Lombards between 568 and 575 before the Franks finally conquered the area. At the division among the heirs of Charlemagne in 870, the Aosta Valley formed part of the Lotharingian Kingdom of Italy. In a second partition a decade later, it formed part of the Kingdom of Upper Burgundy, which was joined to the Kingdom of Arles — all with few corresponding changes in the population of the virtually independent fiefs in the Aosta Valley.[citation needed]

In 1031-1032 Humbert I of Savoy, the founder of the House of Savoy, received the title Count of Aosta from Emperor Conrad II of the Franconian line and built himself a commanding fortification at Bard. Saint Anselm of Canterbury was born in Aosta in 1033 or 1034. The region was divided among strongly fortified castles, and in 1191 Thomas I of Savoy found it necessary to grant to the communes a Charte des franchises ("Charter of Liberties") that preserved autonomy — rights that were fiercely defended until 1770, when they were revoked in order to tie Aosta more closely to Piedmont, but which were again demanded during post-Napoleonic times. In the mid-13th century Emperor Frederick II made the County of Aosta a duchy (see Duke of Aosta), and its arms charged with a lion rampant were carried in the Savoy arms until the reunification of Italy in 1870.[12] During the Middle Ages the region remained strongly feudal, and castles, such as those of the Challant family, still dot the landscape. In the 12th and 13th centuries, German-speaking Walser communities were established in the Lys Valley, and some communes retain their separate Walser identity even today (the two Gressoney and Issime).[citation needed]

The region remained part of Savoy lands, with the exceptions of French occupations from 1539 to 1563, later in 1691, then between 1704 and 1706. As part of the Kingdom of Sardinia it joined the new Kingdom of Italy in 1861. It was also ruled by the First French Empire between 1800 and 1814. During French rule, it was part of Aoste arrondissement in Doire department.[13]

Under Mussolini, a forced programme of Italianization, including the translation of all toponyms into Italian and population transfers of Italian-speaking workers from the rest of Italy into Aosta, fostered movements towards separatism. Many Valdostans chose to emigrate to France and Switzerland (where Valdostan communities are still present).[citation needed]

The region gained special autonomous status after the end of World War Two; the province of Aosta ceased to exist in 1945.[6] 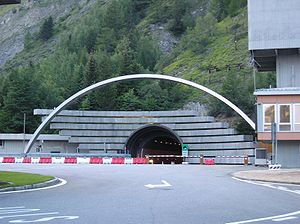 The Aosta Valley remained agricultural and pastoral until the construction of hydroelectric dams brought metalworking industry to the region.[citation needed]

Agriculture has become increasingly specialised, the Region retaining only a small output of cereals, potatoes and fruit. Wines of high quality are produced in small quantities. All are entitled to the Denominazione di origine controllata (Valle d'Aosta DOC / Vallée d'Aoste DOC) label. Animal feed crops supply the region's dairy herds, some 40000 head in 2000, which are pastured in the high Alps during the summer period. The region's cheeses are renowned throughout Italy. Virtually no other form of stock rearing is practised.

Tourism is one of the strongest points of the region's economy. The valley's natural beauty, its peaceful atmosphere in summer and snow in winter have allowed the development of a flourishing tourism industry centred on winter sports, most famously at Courmayeur and Cervinia.[citation needed]

The upper Aosta Valley is the traditional southern starting-point for the tracks, and later roads, to lead over some of the great Alpine passes. The road through the Great St Bernard Pass leads to Martigny, Valais, and the road through the Little St Bernard Pass leads to Bourg-Saint-Maurice, Savoie. Today Aosta is joined to Chamonix in France by the Mont Blanc Tunnel, a road tunnel on the European route E25 running underneath the mountain.[citation needed]

The population density of Aosta Valley is by far the lowest of the Italian regions. In 2008, 38.9 inhabitants per km2 were registered in the region, whereas the average national figure was 198.8, though the region has extensive uninhabitable areas of mountain and glacier, with a substantial part of the population living in the central valley. Migration from tributary valleys has now been stemmed by generous regional support for agriculture and tourist development.[citation needed]

The population is growing slowly but steadily. Negative population growth since 1976 has been more than offset by immigration. The region has one of Italy's lowest birth rates, with a rising average age. This, too, is partly compensated by immigration, since most immigrants arriving in the region are younger people working in the tourist industry. Between 1991 and 2001, the population of Aosta Valley grew by 3.1%, which is the highest growth among the Italian regions. With a negative natural population growth, this is due exclusively to positive net migration.[2] Between 2001 and 2011, the population of Aosta Valley grew by a further 7.07%. As of 2006, the Italian National Institute of Statistics ISTAT estimated that 4,976 foreign-born immigrants live in Aosta Valley, equal to 4.0% of the total regional population.

The Valdôtain population and their language dialects have been the subject of some sociological research.[14]

The cuisine of Aosta Valley is characterized by simplicity and revolves around "robust" ingredients such as potatoes, polenta; cheese and meat; and rye bread. Many of the dishes involve Fontina,[15] a cheese with PDO status, made from cow's milk that originates from the valley. It is found in dishes such as the soup à la vâpeuleunèntse[16] (Valpelline Soup). Other cheeses made in the region are Toma[17] and Seras. Fromadzo (Valdôtain for cheese) has been produced locally since the 15th century and also has PDO status.[18]

The Aosta Valley was the first government authority to adopt Modern French as the official language in 1536, three years before France itself.[24] Italian and French are nowadays the region's official languages[1] and are used for the regional government's acts and laws, though Italian is much more widely spoken in everyday life, and French is mostly spoken in cultural life. School education is delivered equally in both Italian and French[1] so that everyone who went to school in Aosta Valley can speak French to at least at a medium-high level.[25]

The regional language is a dialect of Franco-Provençal called Valdotain (locally, patois). It is spoken as native tongue and as second language by 68,000 residents, about 58% of the population, according to a poll taken by the Fondation Émile Chanoux in 2002. The residents of the villages of Gressoney-Saint-Jean, Gressoney-La-Trinité and Issime, in the Lys Valley, speak two dialects of Walser German origin called Titsch and Töitschu respectively.[25]

Castels in the Valle of Aosta

There are about 150 medieval castles, tours and fortified houses in the Aosta Valley.[26] The most popu1ar are listed in the following table: