The Apalachicola River /æpəlætʃᵻˈkoʊlə/ is a river, approximately 112 mi (180 km) long in the State of Florida. This river's large watershed, known as the ACF River Basin for short, drains an area of approximately 19,500 square miles (50,505 km2) into the Gulf of Mexico. The distance to its farthest headstream in northeast Georgia is approximately 500 miles (800 km). Its name comes from the Apalachicola tribe, which used to live along the river.

It is formed on the state line between Florida and Georgia, near the town of Chattahoochee, Florida, approximately 60 miles (97 km) northeast of Panama City, by the confluence of the Flint and Chattahoochee rivers. The actual confluence is submerged in the Lake Seminole reservoir formed by the Jim Woodruff Dam. It flows generally south through the forests of the Florida Panhandle, past Bristol. In northern Gulf County, it receives the Chipola River from the west. It flows into Apalachicola Bay, an inlet of the Gulf of Mexico, at Apalachicola. The lower 30 mi (48 km) of the river is surrounded by extensive swamps and wetlands except at the coast.

The watershed contains nationally significant forests, with some of the highest biological diversity east of the Mississippi River,[1][2] and rivalling that of the Great Smoky Mountains. It has significant areas of temperate deciduous forest as well as longleaf pine landscapes and flatwoods. Flooded areas have significant tracts of floodplain forest.[3] All these southeastern forest types were devastated by logging between 1880 and 1920[4] and the Appalachiola contains some of the finest remaining examples in the southeast. The endangered tree species Florida Torreya is endemic to the region; it clings to forested slopes and bluffs in Torreya State Park along the east bank of the river. The highest point within the watershed is Blood Mountain at 4,458 ft (1,359 m), near the headwaters of the Chattahoochee River.

Where the river enters the Gulf of Mexico it creates a rich array of wetlands varying in salinity. These include tidal marshes and seagrass meadows. Over 200,000 acres of this diverse delta complex are included within the Apalachicola National Estuarine Research Reserve.[5] There are also dunes with coastal grasslands and interdunal swales. 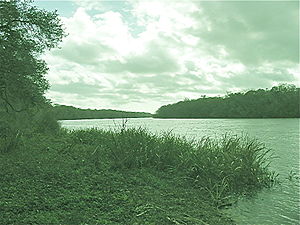 View of the Apalachicola River near Fort Gadsden, Florida

The basin of the Apalachicola River is also noted for its tupelo honey, a high-quality monofloral honey, which is produced wherever the tupelo trees bloom in the southeastern United States. In a good harvest year, the value of the tupelo honey crop produced by a group of specialized Florida beekeepers approaches $900,000 each spring.[6]

During Florida's British colonial period the river formed the boundary between East Florida and West Florida.

Geologically the river links the coastal plain and Gulf Coast with the Appalachian Mountains. During the last ice age, it likely provided a route for trees to move south from the Appalachians and take refuge from the northern cold.[7]

Some of the remaining important areas of natural habitat along the river include Apalachicola National Forest, Torreya State Park, The Nature Conservancy Apalachicola Bluffs and Ravines Preserve, Tates Hell State Forest and Apalachicola River Wildlife and Environmental Area, as well as the Apalachicola River Water Management Area. It has been suggested that this watershed should be nationally ranked and appreciated as being as significant as the Everglades or Great Smoky Mountains.[2]

To raise awareness about the importance of preserving the natural state of the river and its inhabitants, Florida film producer Elam Stoltzfus highlighted this system in a PBS documentary in 2006.[8]