From Infogalactic: the planetary knowledge core
Jump to: navigation, search
This article is about the theatre on Shaftesbury Avenue in the West End of London. For the music hall in New York City, see Apollo Theater. For the theatre across from Victoria station in Westminster, see Apollo Victoria Theatre. For other uses, see Apollo Theatre (disambiguation).

The Apollo Theatre is a Grade II listed West End theatre, on Shaftesbury Avenue in the City of Westminster, in central London.[1] Designed by the architect Lewin Sharp for owner Henry Lowenfeld,[2][3] it became the fourth legitimate theatre to be constructed on the street when it opened its doors on 21 February 1901,[3] with the American musical comedy The Belle of Bohemia.[2][3]

Because Henry Lowenfeld had bought land on the newly created Shaftesbury Avenue at the turn of the 20th century – next door to the Lyric Theatre which opened in 1888 – the Apollo is one of the few theatres in London to be freehold.[2][3]

The only complete theatre design of architect Lewin Sharp,[2] the Apollo was specifically designed for musical theatre and named after the Greek god of the arts and leader of the muses.[4] Constructed by builder Walter Wallis of plain London brick in keeping with the neighbouring streets, the front piece is in the Renaissance style with sculpted stone fascia by T. Simpson. The structure encloses a four-level auditorium, with three cantilevered balconies and a first floor central loggia, decorated in the Louis XIV Style by Hubert van Hooydonk. In keeping with then European style, each level has its own foyer and promenade.[3]

The capacity today is 775 seats,[4] with the balcony on the 3rd tier considered the steepest in London.[3][6]

Due to a relatively unsuccessful opening, impresario Tom B. Davis took a lease on the building, and hence management of operations, from 1902.[4] The theatre was renovated by Ernest Schaufelberg in 1932, with a private foyer and anteroom installed to the Royal Box.[2] Prince Littler took control of the theatre in 1944.[4]

On 19 December 2013, at about 20:15 GMT,[7] 10 square metres (110 sq ft) of the auditorium's ornate plasterwork ceiling collapsed around 40 minutes into a performance of The Curious Incident of the Dog in the Night-Time.[8][9] It brought down a lighting rig and a section of balcony, thereby trapping 2 people and injuring around 88, including 7 seriously. There were 720 people in the audience at the time. The incident was preceded by heavy rain.[7]

The emergency services responded with 25 ambulance crews, an air ambulance rapid response team, 8 fire engines with more than 50 firefighters, and the Metropolitan Police.[8] Casualties were taken to the foyers of the adjacent Gielgud and Queen's theatres,[10] where the emergency services could triage. The London Ambulance Service later stated that they had treated 76 injured people, with 58 taken to four London hospitals, some on commandeered buses.[8] Guy's and St Thomas' NHS Foundation Trust said 34 adults and 5 children were subsequently treated in accident and emergency at St Thomas' Hospital.[8]

The venue reopened 26 March 2014, with an adaptation of Let the Right One In produced by the National Theatre of Scotland. The owners were able to reopen the theatre by sealing the fourth level and balcony with a temporary floor which allowed investigators to continue their work in determining the cause of the collapse.[11] 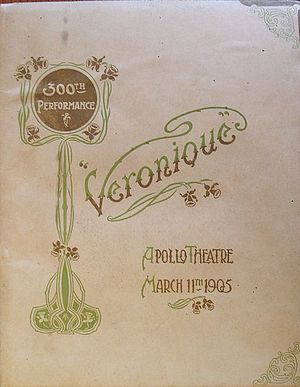 Souvenir of 300th performance of Véronique at the theatre in 1905

The opening caused a public uproar, with a selected audience for the first performance, on Thursday 21 February 1901, and the first public performance scheduled for 22 February.[3] The Times refused to review the private opening, instead waiting until the first public production on the following day.[3] The opening production was the American musical comedy The Belle of Bohemia,[2] which survived for 72 performances—17 more than it had accomplished when produced on Broadway.[3] The production was followed by John Martin-Harvey's season, including A Cigarette Maker's Romance and The Only Way, an adaptation of Charles Dickens' A Tale of Two Cities.[2][3]

George Edwardes produced a series of successful Edwardian musical comedies, including Kitty Grey (1901), Three Little Maids and The Girl from Kays (1902). An English version of André Messager's light opera Véronique became a hit in 1904, starring with Ruth Vincent, who also starred in Edward German's Tom Jones in 1907 in which Cicely Courtneidge made her London debut.[12] Between 1908 and 1912, the theatre hosted H. G. Pelissier's The Follies. After this, the theatre hosted a variety of works, including seasons of plays by Charles Hawtrey in 1913, 1914 and 1924, and Harold Brighouse's Hobson's Choice in 1916.[4] Inside the Lines by Earl Derr Biggers ran for 421 performances in 1917.[12] Gilbert Dayle's What Would a Gentleman Do? played in 1918 [2] and Tilly of Bloomsbury by Ian Hay was the success in 1919.[12]

George Grossmith, Jr. and Edward Laurillard managed the theatre from 1920 to 1923, presenting a series of plays and revivals, including Such a Nice Young Man by H.F. Maltby (1920) and the stage version of George Du Maurier's novel Trilby (1922). They had produced The Only Girl here in 1916 and Tilly of Bloomsbury in 1919. The Fake was produced in 1924, starring Godfrey Tearle. 1927 saw Abie's Irish Rose and Whispering Wires, with Henry Daniel. The next year, Laurence Olivier starred in R. C. Sherriff's Journey's End. Sean O'Casey's The Silver Tassie and Ivor Novello's A Symphony in Two Flats both played in 1929. Diana Wynyard starred as Charlotte Brontë in Clemence Dane's Wild Decembers in 1932. Marion Lorne was the star of a number of plays by her husband Walter Hackett from 1934 to 1937. Ian Hay's Housemaster had the most successful run in this period with 662 performances from 1936 .[12] Raymond Massey starred in Robert Sherwood's Pulitzer Prize-winning Idiot's Delight in 1938. Patrick Hamilton's play Gas Light held the stage in 1939, and Terence Rattigan's Flare Path played in 1942.[4]

Control of the theatre transferred to Prince Littler in 1944. John Clements and Kay Hammond starred that year in a revival of Noël Coward's Private Lives, and Margaret Rutherford starred in The Happiest Days of Your Life in 1948, followed by Sybil Thorndike and Lewis Casson in Treasure Hunt, directed by John Gielgud in 1949. After this, Seagulls Over Sorrento ran for over three years beginning in 1950. The theatre's longest run was the comedy Boeing Boeing, starring Patrick Cargill and David Tomlinson, which opened in 1962 and transferred to the Duchess Theatre in 1965. In 1968, Gielgud starred in Alan Bennett's Forty Years On and in 1969, he returned in David Storey's Home, with Ralph Richardson. He returned to the theatre in 1988, at the age of 83, in The Best of Friends by Hugh Whitemore.[4]

A number of hit comedies transferred to or from the theatre in the 1970s and 1980s, and other important plays here during the period included Rattigan's Separate Tables, with John Mills in 1976, Lyle Kessler's Orphans in 1986 with Albert Finney, I'm Not Rappaport the same year, with Paul Scofield, and Dorothy Tutin, Eileen Atkins and Siân Phillips in Thursday's Ladies in 1987. Driving Miss Daisy played in 1988, starring Wendy Hiller, and 1989 saw Zoe Wanamaker in Mrs Klein, Vanessa Redgrave in A Madhouse in Goa, "Thunderbirds FAB" starring Andrew Dawson & Gavin Robertson, Peter O'Toole in Jeffrey Bernard Is Unwell. Penelope Wilton starred in Rattigan's The Deep Blue Sea in 1993 and In Praise of Love played in 1995, with Peter Bowles. Mark Little starred in the Laurence Olivier Award-winning one-man show, Defending the Caveman in 1999.[4] 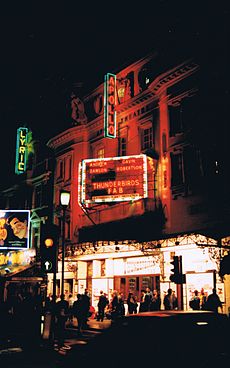 The facade in 1989, during a production of Thunderbirds FAB