From Infogalactic: the planetary knowledge core
Jump to: navigation, search
For other uses of Apollonia, see Apollonia (disambiguation). 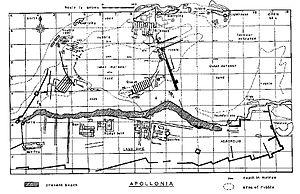 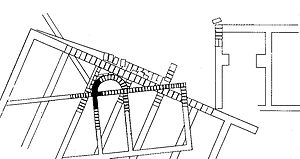 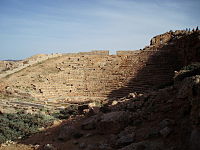 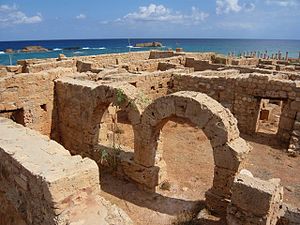 Palace in Apollonia with the Eastern Basilica in the background

Apollonia (Greek: Απολλωνία) in Cyrenaica (modern Libya) was founded by Greek colonists and became a significant commercial centre in the southern Mediterranean. It served as the harbour of Cyrene, 20 km (12 mi) to the southwest.

Apollonia became autonomous from Cyrene at latest by the time the area came within the power of Rome, when it was one of the five cities of the Libyan Pentapolis, growing in power until, in the 6th century A.D., it became the capital of the Roman province of Libya Superior or Libya Pentapolitana. The city became known as Sozusa, which explains the modern name of Marsa Susa or Susa, which grew up long after the cessation of urban life in the ancient city after the Arab invasion of AD 643.[1]

Sozusa was an episcopal see and is included in the Catholic Church's list of titular sees.[2]

The early foundation levels of the city of Apollonia are below sea level due to submergence in earthquakes, while the upper strata of the later Byzantine Christian periods are several meters above sea level, built on the accumulated deposits of previous periods. The existence of buildings in the sea was noted by Beechey (1827), with some rough drawings, and Goodchild (1950s) and fr (André Laronde) also published archaeological surveys of the site.[3] In 1958 and 1959 Nicholas Flemming, then an undergraduate at Cambridge University, led teams of undergraduates trained in scuba diving and underwater surveying to map the large sector of the city beneath the sea. The results of this work were published, complete with maps and diagrams of underwater buildings in the references cited below. Carlo Beltrame and colleagues have recently made an underwater photographic survey of some of the buildings.

The Crete earthquake and tsunami of 21 July 365 AD apparently caused extensive damage to the city and harbor.

The Apollonia (Susa) Museum houses many artifacts found on the ancient site.

Apollonia is particularly known for its ruins of three churches (out of five originally standing) dating from the Byzantine period.

The Palace was last used as the Byzantine Duke's Palace and contains over 100 rooms. The previous use was as a Roman military commander's house.

The well-preserved Greek theatre stands facing the sea outside the old city walls. The cavea has 28 seat levels. 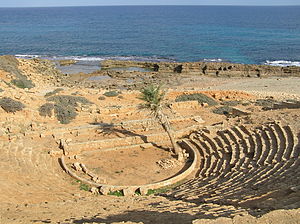 The ancient theatre of Apollonia.