From Infogalactic: the planetary knowledge core
(Redirected from Apotropaic)
Jump to: navigation, search 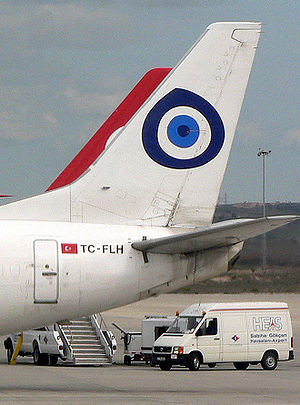 The ancient blue and white Nazar boncuğu symbol, a stylised eye thought to avert the evil eye, appears on this Turkish Airlines airplane

Apotropaic magic (from Greek apotrepein "to ward off" from apo- "away" and trepein "to turn") is a type of magic intended to turn away harm or evil influences, as in deflecting misfortune or averting the evil eye. Apotropaic observances may also be practiced out of vague superstition or out of tradition, as in good luck charm (perhaps some token on a charm bracelet), amulets, or gestures such as crossed fingers or knocking on wood. The Greeks made offerings to the averting gods (Ἀποτρόπαιοι θεοί: Apotropaioi Theoi), chthonic deities and heroes who grant safety and deflect evil.[1] 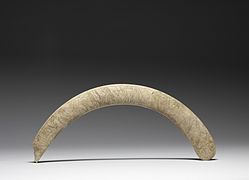 This apotropaic wand shows a procession of protective deities. Such a wand would have been used in rituals associated with birth and were perhaps used to draw a magical circle around the mother and child. Walters Art Museum, Baltimore.

Apotropaic magical rituals were practiced throughout the ancient Near East and Egypt. Fearsome deities were invoked via ritual in order to protect individuals by warding away evil spirits. In ancient Egypt, these household rituals (performed in the home, not in state-run temples) were embodied by the deity who personified magic itself, Heka.[2] The two gods most frequently invoked in these rituals were the hippopotamusiform fertility goddess, Taweret, and the lion-demon, Bes (who developed from the early apotropaic dwarf demon-god, Aha, literally meaning "fighter").[3]

Objects were often used in these rituals in order to facilitate communication with the gods. One of the most commonly found magical objects, the ivory apotropaic wand, gained widespread popularity in the Middle Kingdom (ca. 1550 - 1069 BCE).[4] These wands were used to protect expectant mothers and children from malevolent forces, and were adorned with processions of apotropaic solar deities. Likewise, protective amulets bearing the likenesses of gods and goddesses like Taweret were commonly worn. Water came to be used frequently in ritual as well, wherein libation vessels in the shape of Taweret were used to pour healing water over an individual. In much later periods (when Egypt came under the Greek Ptolemies), stele featuring the god Horus were used in similar rituals; water would be poured over the stele and—after ritually acquiring healing powers—was collected in a basin for an afflicted person to drink.

The Gorgon, flanked by lionesses and showing her belt clasp of serpents, as depicted at the west pediment of the 580 B.C. temple of Artemis in Corfu on display at the Archaeological Museum of Corfu.

Among the Ancient Greeks the most widely used image intended to avert evil was that of the Gorgon, the head of which now may be called the Gorgoneion, which features wild eyes, fangs, and protruding tongue. The full figure of the Gorgon holds the apex of the oldest remaining Greek temple where she is flanked by two lionesses. The Gorgon head was mounted on the aegis and shield of Athena.[5]

Eyes were often painted to ward off the evil eye. An exaggerated apotropaic eye or a pair of eyes were painted on Greek drinking vessels called kylikes (eye-cups) from the 6th century BC. The exaggerated eyes may have prevented evil spirits from entering the mouth while drinking.[6][7] Fishing boats in some parts of the Mediterranean region still have stylised eyes painted on the bows. A Turkish budget airline, Fly Havayolu Taşımacılık A.Ş., had adopted the symbol (known as Nazar boncuğu or Nazar bonjuk) as a motif for the vertical stabilizer of its aeroplanes. The Yiddish expression, Kain ein horeh (קיין עין הרע) is apotropaic in nature, and literally translates to "no evil eye", somewhat equivalent to the expression, "Knock on wood." 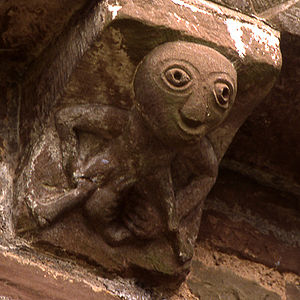 A 12th-century Sheela na Gig on the church at Kilpeck, Herefordshire

People believed that the doorways and windows of buildings were particularly vulnerable to the entry or passage of evil. On churches and castles, gargoyles or other grotesque faces and figures such as sheela na gigs and Hunky Punks were carved to frighten away witches and other malign influences. Figures may also have been carved at fireplaces or chimneys; in some cases, simple geometric or letter carvings were used for these. When a wooden post was used to support a chimney opening, this was often an easier material for amateur carving. To discourage witchcraft, rowan wood may have been chosen for the post or mantel.[8]

Similarly the grotesque faces carved into pumpkin lanterns (and their earlier counterparts, made from turnips, swedes or beets) at Halloween are meant to avert evil: this season was Samhain, the Celtic new year. As a "time between times", it was believed to be a period when souls of the dead and other dangerous spirits walked the earth. Many European peoples had such associations with the period following the harvest in the fall. (See also: Celtic calendar)

Mirrors and other shiny objects were believed to deflect the evil eye. Traditional English "Plough Jags" (performers of a regional variant of the mummers play) sometimes decorated their costumes (particularly their hats) with shiny items, to the extent of borrowing silver plate for the purpose. "Witch balls" are shiny blown glass ornaments, like Christmas baubles, that were hung in windows.

Items and symbols such as crosses, crucifixes, silver bullets, wild roses and garlic were believed to ward off or destroy vampires.

In Ireland and Great Britain, magpies are traditionally thought to bring bad luck. Many people repeated various rhymes or salutations to placate them.[9]

In Ancient Greece, phalli were believed to have apotropaic qualities. Often stone reliefs would be placed above doorways, and three-dimensional versions were erected across the Greek world. Most notable of these were the urban monuments found on the island of Delos. Grotesque, satyr-like bearded faces, sometimes with the pointed cap of the workman, were carved over the doors of ovens and kilns, to protect the work from fire and mishap.[10]

A similar use of phallic representations to ward off the evil eye remains popular in modern Bhutan; it is associated with the 500-year-old Buddhist tradition of Drukpa Kunley. It is paralleled by other south Asian uses of the lingam symbol.[11] 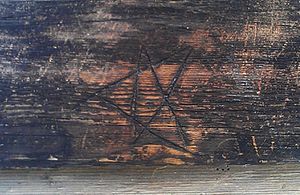 In Roman art, apotropaic imagery was a common theme. Envy was thought to bring bad luck to the person envied. To avoid envy, Romans sought to incite laughter in their guests by using humorous images. Images such as large phalluses (see fascinum), deformities like hunchbacks, or non-Roman subjects such as pygmies and black Africans were common. Romans saw deformity as comical and believed that such images could be used to deflect the evil eye.[12]

In Europe, apotropaic figureheads carved onto the prow of sailing ships are considered to have been a replacement for the sacrifice of a thrall during the Age of Invasions by Saxon and Viking sailors, to avoid bad luck on the voyage. Dredging of the Thames under London Bridge, led to the discovery of a large number of bent and broken knives, daggers, swords and coins, from the modern period and dating back to Celtic times. This custom seems to have been to avoid bad luck, particularly when setting off on a voyage. Similarly, the burial of an old boot or shoe by the lintel of the back door of a house, seems to have had a similar intention. 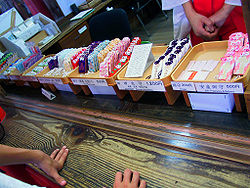 Amulets for specific purposes on sale at a Shinto shrine in Japan
File:Votive tree cappadocia.jpg
The tree covered with Nazars against malefice

It is difficult to differentiate between items supposed to avert evil and items intended to attract good fortune, but generally a talisman brings good luck[13] whereas an amulet wards off or protects against and is therefore apotropaic.

In Western culture, a horseshoe was often nailed up over, or close by, doorways, normally with the ends pointing upwards; it is said to collect good luck, or to stop the luck from falling out (see Oakham's horseshoes). Model horseshoes (of card or plastic) are given as good-luck tokens, particularly at weddings, and small paper horseshoes feature in confetti.[citation needed]

In Ireland, St Brigid's crosses, woven from rush, were kept indoors (in houses and animal houses) to keep away illness for the year.[citation needed]

In some Native American cultures, a dreamcatcher made of yarn like a web is placed above a bed or sleeping area to protect sleeping children from nightmares.[citation needed]