From Infogalactic: the planetary knowledge core
Jump to: navigation, search
This article is about the first mass-produced Apple computer. For an overview of the series of computers based on it, see Apple II series. 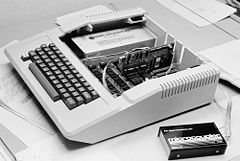 An Apple II computer with an external modem

The Apple II (stylized as apple ][) is an 8-bit home computer, one of the first highly successful mass-produced microcomputer products,[2] designed primarily by Steve Wozniak (Steve Jobs oversaw the development of the Apple II's unusual case[3] and Rod Holt developed the unique power supply[4]). It was introduced in 1977 at the West Coast Computer Faire by Jobs and was the first consumer product sold by Apple Computer. It is the first model in a series of computers which were produced until Apple IIe production ceased in November 1993.[5]

The earliest Apple IIs were assembled in Silicon Valley, and later in Texas;[6] printed circuit boards were manufactured in Ireland and Singapore. The first computers went on sale on June 10, 1977[7][8] with a MOS Technology 6502 microprocessor running at 1.023 MHz, two game paddles,[9] 4 kB of RAM, an audio cassette interface for loading programs and storing data, and the Integer BASIC programming language built into the ROMs. The video controller displays 24 lines by 40 columns of monochrome, upper-case-only (the original character set matches ASCII characters 20h to 5Fh) text on the screen, with NTSC composite video output suitable for display on a TV monitor, or on a regular TV set by way of a separate RF modulator. The original retail price of the computer was $1,298 USD[10] (with 4 kB of RAM) and $2,638 USD (with the maximum 48 kB of RAM).[11] To reflect the computer's color graphics capability, the Apple logo on the casing has rainbow stripes,[12] which remained a part of Apple's corporate logo until early 1998.

In the May 1977 issue of BYTE, Steve Wozniak published a detailed description of his design; the article began, "To me, a personal computer should be small, reliable, convenient to use and inexpensive".[13]

The Apple II used a multiplicity of idiosyncratic engineering shortcuts to save hardware and reduce costs. For example:

The text and graphics screens have a complex arrangement (the scanlines were not stored in sequential areas of memory) which is reputedly due to Wozniak's realization that doing it that way would allow for the refresh of the dynamic RAM as a side effect, as described above; it had no cost overhead to have software calculate or look up the address of the required scanline and avoided the need for significant extra hardware. Similarly, in the high-resolution graphics mode, color is determined by pixel position and can thus be implemented in software, saving Wozniak the chips needed to convert bit patterns to colors. This also allows for subpixel font rendering since orange and blue pixels appear half a pixel-width farther to the right on the screen than green and purple pixels.[14]

The Apple II at first used data cassette storage like most other microcomputers of the time. In 1978 the company introduced an external 5¼-inch floppy disk drive, the Disk II, attached via a controller card that plugs into one of the computer's expansion slots (usually slot 6). The Disk II interface, created by Wozniak, is regarded as an engineering masterpiece for its economy of electronic components.[15][16]

The approach taken in the Disk II controller is typical of Wozniak's designs. With a few small-scale logic chips and a cheap PROM (programmable read-only memory), he created a functional floppy-disk interface at a fraction of the component cost of standard circuit configurations.

With the Apple I and the Apple II, Wozniak introduced an entirely novel configuration of the microcomputer concept which was immediately adopted as the industry standard, and remains taken for granted to this day - namely the integration of the standard input and output devices (the typewriter style keyboard and the video display screen) into the computer itself. Until that time, microcomputer devices either had an extremely limited I/O capability - such as perhaps a hex keypad and a 16 or 32 character display, or no built-in user interface at all following the convention of mainframe and minicomputers in requiring the connection of an external teleprinter unit or visual display terminal to complete a usable system. The cost of such terminals could easily exceed the price of the computer itself. Wozniak's inclusion of an RF output which could connect to the aerial socket of a standard domestic television set enabled users to acquire a complete system without incurring the cost of a video monitor.

Color on the Apple II series uses a quirk of the NTSC television signal standard, which made color display relatively easy and inexpensive to implement. The original NTSC television signal specification was black-and-white. Color was added on later by adding a 3.58-MHz subcarrier signal that was partially ignored by B&W TV sets. Color is encoded based on the phase of this signal in relation to a reference color burst signal. The result is that the position, size, and intensity of a series of pulses define color information. These pulses can translate into pixels on the computer screen, with the possibility of exploiting composite artifact colors.

The Apple II display provides two pixels per subcarrier cycle. When the color burst reference signal is turned on and the computer attached to a color display, it can display green by showing one alternating pattern of pixels, magenta with an opposite pattern of alternating pixels, and white by placing two pixels next to each other. Blue and orange are available by tweaking the offset of the pixels by half a pixel-width in relation to the color-burst signal. The high-resolution display offers more colors by compressing more, narrower pixels into each subcarrier cycle.

The coarse, low-resolution graphics display mode works differently, as it can output a pattern of dots per pixel to offer more color options. These patterns are stored in the character generator ROM and replace the text character bit patterns when the computer is switched to low-res graphics mode. The text mode and low-res graphics mode use the same memory region and the same circuitry is used for both.

Rather than having a dedicated sound-synthesis chip, the Apple II has a toggle circuit that can only emit a click through a built-in speaker or a line out jack; all other sounds (including two, three and, eventually, four-voice music and playback of audio samples and speech synthesis) are generated entirely by software that clicked the speaker at just the right times. Similar techniques are used for cassette storage: the cassette output works the same as the speaker, and the input is a simple zero-crossing detector that serves as a relatively crude (1-bit) audio digitizer. Routines in the ROM encode and decode data in frequency-shift keying for the cassette.

Initially the Apple II was shipped with a built-in BASIC language interpreter encoded in the mother-board ROM chips. Written by Wozniak, the interpreter enabled users to write software applications without needing to purchase additional development utilities. Written with games programmers and hobbyists in mind, the language only supported the encoding of numbers in 16-bit integer format. The limitation of restricting numerical values to whole numbers in the range between -32768 to +32768 compromised the machine's attraction to business users. Jobs responded by licensing a floating-point version of Basic from Microsoft which was initially available as a plug-in expansion card. This more versatile (but slower) variant was more popular with customers, so later models were shipped with it as standard and anyone wanting Integer Basic had to get that on a language card.

As shipped, the machine incorporated a "monitor" program which supported functions such as displaying and altering the contents of the computer's RAM memory in hexadecimal format, either one byte at a time or in blocks of 256 bytes at once. This feature enabled hackers to write and debug machine code programs without needing further development software.

A 6502 assembler was soon offered on disk, and later the UCSD complier and operating system for the Pascal language was made available. The Pascal system required a 16k RAM card to be installed in the language card position (expansion slot 0) in addition to the full 48k of mother-board memory.

Wozniak's open architecture design and the Apple II's multiple expansion slots permit a wide variety of third-party devices, including peripheral cards such as serial controllers, display controllers, memory boards, hard disks, networking components, and realtime clocks. There are plug-in expansion cards – such as the Z-80 SoftCard – that permit the Apple to use the Z80 processor and run programs for the CP/M operating system,[17] including the dBase II database and the WordStar word processor. There is also a third-party 6809 card that allows OS-9 Level One to be run. Third-party sound cards greatly improve audio capabilities, allowing simple music synthesis and text-to-speech functions. Apple II accelerator cards double or quadruple the computer's speed.

After seeing a crude, wire-wrapped prototype demonstrated by Wozniak and Steve Jobs in November 1976,[9] BYTE predicted in April 1977 that the Apple II "may be the first product to fully qualify as the 'appliance computer' ... a completed system which is purchased off the retail shelf, taken home, plugged in and used". The computer's color graphics capability especially impressed the magazine.[18] The magazine published a favorable review of the computer in March 1978, concluding that "For the user that wants color graphics, the Apple II is the only practical choice available in the 'appliance' computer class".[9]

Personal Computer World in August 1978 also cited the color capability as a strength, stating that "the prime reason that anyone buys an Apple II must surely be for the colour graphics". While mentioning the "oddity" of the artifact colors that produced output "that is not always what one wishes to do", it noted that "no-one has colour graphics like this at this sort of price". The magazine praised the sophisticated monitor software, user expandability, and comprehensive documentation, and concluded that "the Apple II is a very promising machine" which "would be even more of a temptation were its price slightly lower ... for the moment, colour is an Apple II".[19]

Although it sold briskly from the launch, the initial market was to hobbyists, games players and computer enthusiasts. Sales expanded exponentially into the business and professional market when the spreadsheet program VisiCalc was launched in mid 1979. VisiCalc is credited with being the defining "killer app" in the microcomputer industry.

During the first five years of operations revenues grew exponentially, doubling about every four months. Between September 1977 and September 1980 yearly sales grew from $775,000 to $118m, an average annual growth rate of 533%.[20] During this period the sole products of the company were the Apple II and its peripherals, accessories and software.