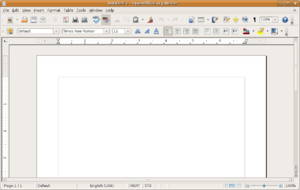 An application program (app or application for short) is a computer program designed to perform a group of coordinated functions, tasks, or activities for the benefit of the user. Examples of an application include a word processor, a spreadsheet, an accounting application, a web browser, a media player, an aeronautical flight simulator, a console game or a photo editor. The collective noun application software refers to all applications collectively.[1] This contrasts with system software, which is mainly involved with running the computer.

Applications may be bundled with the computer and its system software or published separately, and may be coded as proprietary, open-source or university projects.[2]

In information technology, an application is a computer program designed to help people perform an activity. An application thus differs from an operating system (which runs a computer), a utility (which performs maintenance or general-purpose chores), and a programming tool (with which computer programs are created)[original research?]. Depending on the activity for which it was designed, an application can manipulate text, numbers, graphics, or a combination of these elements. Some application packages focus on a single task, such as word processing; others, called integrated software include several applications.[3]

The delineation between system software such as operating systems and application software is not exact, however, and is occasionally the object of controversy.[4] For example, one of the key questions in the United States v. Microsoft antitrust trial was whether Microsoft's Internet Explorer web browser was part of its Windows operating system or a separable piece of application software. As another example, the GNU/Linux naming controversy is, in part, due to disagreement about the relationship between the Linux kernel and the operating systems built over this kernel. In some types of embedded systems, the application software and the operating system software may be indistinguishable to the user, as in the case of software used to control a VCR, DVD player or microwave oven. The above definitions may exclude some applications that may exist on some computers in large organizations. For an alternative definition of an app: see Application Portfolio Management.

Some applications are available in versions for several different platforms; others have narrower requirements and are thus called, for example, a Geography application for Windows, an Android application for education, or Linux gaming. Sometimes a new and popular application arises which only runs on one platform, increasing the desirability of that platform. This is called a killer application or killer app.

There are many different ways to divide up different types of application software, and several are explained here.

Since the development and near-universal adoption of the web, an important distinction that has emerged has been between web applications — written with HTML, JavaScript and other web-native technologies and typically requiring one to be online and running a web browser, and the more traditional native applications written in whatever languages are available for one's particular type of computer. There has been contentious debate in the computing community regarding web applications replacing native applications for many purposes, especially on mobile devices such as smart phones and tablets. Web apps have indeed greatly increased in popularity for some uses, but the advantages of applications make them unlikely to disappear soon, if ever. Furthermore, the two can be complementary, and even integrated.[7][8][9]

Application software can also be seen as being either horizontal or vertical.[10][11] Horizontal applications are more popular and widespread, because they are general purpose, for example word processors or databases. Vertical applications are niche products, designed for a particular type of industry or business, or department within an organization. Integrated suites of software will try to handle every specific aspect possible of, for example, manufacturing or banking systems, or accounting, or customer service.

There are many types of application software:

Applications can also be classified by computing platform such as a particular operating system, delivery network such as in cloud computing and Web 2.0 applications, or delivery devices such as mobile apps for mobile devices.