The April Uprising (Bulgarian: Априлско въстание, Aprilsko vǎstanie) was an insurrection organised by the Bulgarians in the Ottoman Empire from April to May 1876, which indirectly resulted in the re-establishment of Bulgaria in 1878.[1] Тhe regular Ottoman Army and irregular bashi-bazouk units brutally suppressed the rebels, leading to a public outcry in Europe and the United States, with many famous intellectuals condemning the Ottoman atrocities and supporting the oppressed Bulgarian population.

The 1876 uprising involved only those parts of the Ottoman territories populated predominantly by Bulgarians. The emergence of Bulgarian national sentiments was closely related to the re-establishment of the independent Bulgarian Orthodox Church in 1870. Together with notions of romantic nationalism, the rise of national awareness became known as the Bulgarian National Revival.

In Europe, in the eighteenth century, the classic non-national states were the multi-ethnic empires such as the Ottoman Empire, ruled by a Sultan and the population belonged to many ethnic groups, which spoke many languages. The idea of nation state was an increasing emphasis during the 19th century, on the ethnic and racial origins of the nations. The most noticeable characteristic was the degree to which nation states use the state as an instrument of national unity, in economic, social and cultural life. By the 18th century, the Ottomans had fallen well behind the rest of Europe in science, technology, and industry. However, the Bulgarian population was also suppressed socially and politically under Ottoman rule. Additionally, more immediate causes for the greater mobilisation compared to earlier revolts were the severe internal and external problems which the Ottoman Empire experienced in the middle of the 1870s. In 1875, taxes levied on non-Muslims were raised for fear of a state bankruptcy, which, in turn, caused additional tension between Muslims and Christians and facilitated the breakout of the Herzegovinian rebellion and the Stara Zagora revolt in Bulgaria. The failure of the Ottomans to handle the Herzegovinian uprising successfully showed the weakness of the Ottoman state while the brutalities which ensued, discredited additionally the empire to the outside world. In the late 19th century European ideas of nationalism were adopted by the Bulgarian elite. 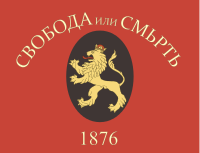 In November 1875, activists of the Bulgarian Revolutionary Central Committee met in the Romanian town of Giurgiu and decided that the political situation was suitable for a general uprising. The uprising was scheduled for April or May 1876. The territory of the country was divided into five revolutionary districts with centers in Vratsa (leader-Stoyan Zaimov), Veliko Tarnovo (Stefan Stambolov), Sliven (Ilarion Dragostinov), Plovdiv (Panayot Volov-later given up his position to his assistant Georgi Benkovski) and Sofia (Nikola Obretenov).

The rebels had been hoarding arms and ammunition for some time and even constructed makeshift cannon out of cherry-wood.[2][3]

In conformity with the decisions taken at Oborishte, on 20 April 1876 the local rebel committee attacked and surrounded the headquarters of the Ottoman police in Koprivshtitsa commanded by Necip Aga. At least two Ottoman police officials were killed and Necip Aga was forced to release arrested Bulgarian rebel suspects. Necip Aga and his close officials managed to escape the siege. However, due to this incident the Bulgarian rebels had to proclaim the insurrection two weeks in advance of the planned date.[4] Within several days, the rebellion spread to the whole Sredna Gora and to a number of towns and villages in the northwestern Rhodopes. The insurrection broke out in the other revolutionary districts, as well, though on a much smaller scale. The areas of Gabrovo, Tryavna, and Pavlikeni also revolted in force, as well as several villages north and south of Sliven and near Berovo (in the present-day Republic of Macedonia).

The rebels attacked Muslim civilians as well as Ottoman officials and police. The number of civilians killed by the rebels is disputed. This violence is cited as provocation for the violence of Turkish forces against Bulgarian civilians during the suppression of the rebellion.

According to a contemporary report by Walter Baring, a secretary of the British Embassy to the Ottoman Empire, the Muslim civilian population was not significantly affected.[5][6] This was also substantiated by the reports of Eugene Schuyler and James F. Clarke, according to whom very few peaceful Muslims were killed.[7] This has been accepted by modern historians; for example, according to Richard Shannon less than 200 Muslims were killed, very few of them non-combatants.[8] In fact, according to the report written by Schuyler and American journalist Januarius MacGahan, even the Ottoman government did not claim more than 500 Muslims killed, most of them in battle.[9] (MacGahan was a close friend of Russian general Mikhail Skobelev, whom he accompanied while covering the Russo-Turkish War, including the Siege of Plevna; he was married to a Russian noblewoman. MacGahan was already favored in the Russian court after his coverage of the Siege of Khiva with the Russian Army.[10][11])

American historian Justin McCarthy claims that during the revolts over 1,000 Muslims were slaughtered and many more expelled.[12] Stanford Shaw claims that many more Muslims were killed during the April Uprising than Christians.[13] According to Barbara Jelavich, the beginning of the April Uprising was accompanied by a massacre of Muslim civilians (without specifying casualties).[14]

The Ottoman response was immediate and severe. They mobilized detachments of regular troops and also irregular bashi-bazouks. These forces attacked the first insurgent towns as early as 25 April. The Turkish forces massacred civilian populations, the principal places being Panagurishte, Perushtitza, Bratzigovo, and Batak (see Batak massacre).[15] By the middle of May, the insurrection was completely suppressed; one of the last sparks of resistance was poet Hristo Botev's attempt to come to the rebels' rescue with a detachment of Bulgarian political émigrés resident in Romania, ending with the unit's rout and Botev's death.

The most detailed contemporaneous account was that of Eugene Schuyler. After visiting some of the sites, Schuyler published a report detailing the atrocities. He reported that fifty-eight villages had been destroyed, five monasteries demolished, and fifteen thousand rebels killed.[16] The American historian Richard Milliman states that Schuyler visited personally only 11 of the villages he reported on. Schuyler, however certainly visited Batak and many other of the destroyed towns and villages, including Perushtitsa [17] and Panagyurishte.[18] Millman also claims that the accepted reality of the massacres is largely a myth.[19] Contemporary Bulgarian historians generally accept the number of Bulgarian casualties at the end of the uprising to be around 30,000. According to British and French figures, 12,000–15,000 Bulgarian civilians were massacred during the uprising.[14]

Reaction in Europe and the United States

News of massacres of Bulgarians reached European embassies in Istanbul in May and June 1876 through Bulgarian students at Robert College, the American college in the city. Faculty members at Robert College wrote to the British Ambassador and to the Istanbul correspondents of The Times and the London Daily News.

An article about the massacres in the Daily News on 23 June provoked a question in Parliament about Britain's support for Turkey, and demands for an investigation. Prime Minister Benjamin Disraeli promised to conduct an investigation about what had really happened.

In July, the British Embassy in Istanbul sent a second secretary, Walter Baring, to Bulgaria to investigate the stories of atrocities. Baring did not speak Bulgarian (although he did speak Turkish) and British policy was officially pro-Turkish, so the Bulgarian community in Istanbul feared he would not report the complete story. They asked the American Consul in Istanbul, Eugene Schuyler, to conduct his own investigation. 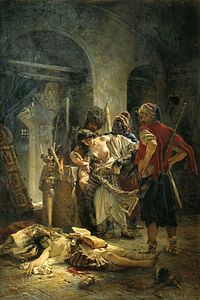 Schuyler set off for Bulgaria on 23 July, four days after Baring. He was accompanied by a well-known American war correspondent, Januarius MacGahan, by a German correspondent, and by a Russian diplomat, Prince Aleksei Tseretelev.

Schuyler's group spent three weeks visiting Batak and other villages where massacres had taken place. Schuyler's official report, published in November 1876, said that fifty-eight villages in Bulgaria had been destroyed, five monasteries demolished, and fifteen thousand people in all massacred. The report was reprinted as a booklet and widely circulated in Europe.[21]

Baring's report to the British government about the massacres was similar, but put the number of victims at about twelve thousand.

A century later, one historian claimed that the number killed was exaggerated, and was closer to three thousand.[22] But it is difficult to ignore the accounts of MacGahan, Schuyler and Baring, who visited the massacre sites three months after they occurred, and saw many of the unburied corpses. The actual number of victims will never be known.

MacGahan's vivid articles from Bulgaria moved British public opinion against Turkey. He described in particular what he had seen in the town of Batak, where five thousand of a total of seven thousand residents had been slaughtered, beheaded or burned alive by Turkish irregulars, and their bodies left in piles around the town square and the church. He described "Skulls with gray hair still attached to them, dark tresses which had once adorned the heads of maidens, the mutilated trunks of men, the rotting limbs of children ..."[21]

The political impact of the reports was immediate and dramatic. The leader of the British opposition, William Ewart Gladstone, wrote a booklet denouncing what he called "the Bulgarian Horrors", and calling upon Britain to withdraw its support for Turkey. "I entreat my countrymen", he wrote, "upon whom far more than upon any other people in Europe it depends, to require and to insist that our government, which has been working in one direction, shall work in the other, and shall apply all its vigor to concur with the states of Europe in obtaining the extinction of the Turkish executive power in Bulgaria. Let the Turks now carry away their abuses in the only possible manner, namely, by carrying off themselves ..."[23][24]

Prominent Europeans, including Charles Darwin, Oscar Wilde, Victor Hugo, and Giuseppe Garibaldi, spoke against the Turkish behavior in Bulgaria. When the war with Russia started in 1877, the Turkish Government asked Britain for help, but the British government refused, citing public outrage caused by the Bulgarian massacres as the reason.

The April uprising was a failure as a revolution, but due to publicity that was given to the reprisals that followed, it led directly to European demands for reform of the Ottoman Empire, and the Russo-Turkish War, which ended in Turkish defeat, and the signing of the Treaty of San Stefano in March 1878, followed in July that year by the Treaty of Berlin. It thus ultimately achieved its original purpose, the liberation of Bulgaria from the Ottoman Empire.