From Infogalactic: the planetary knowledge core
Jump to: navigation, search
This article is about the architectural feature. For the astronomical term, see apsis. For the rock band, see Apse (band). For the acronym APS, see APS (disambiguation). 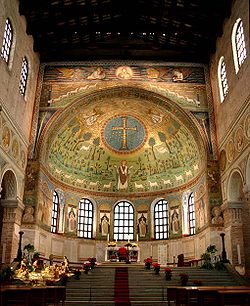 Typical early Christian Byzantine apse with a hemispherical semi-dome in the Basilica of Sant'Apollinare in Classe. 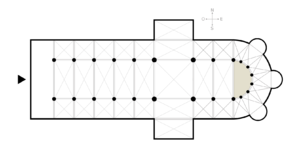 Typical floor plan of a cathedral. Apse is shown in grey

In architecture, the apse (from Latin absis: "arch, vault" from Greek ἀψίς apsis "arch"; sometimes written apsis; plural apsides) is a semicircular recess covered with a hemispherical vault or semi-dome, also known as an Exedra. In Romanesque, Byzantine and Gothic Christian abbey, cathedral and church architecture, the term is applied to a semi-circular or polygonal termination of the main building at the liturgical east end (where the altar is), regardless of the shape of the roof, which may be flat, sloping, domed, or hemispherical.

The apse is the semicircular or polygonal termination to the choir or aisles of a church. In relation to church architecture it is generally the name given to where the altar is placed or where the clergy are seated.[1]

The apse is separated from the main part of the church by the transept.[2]

The domed apse became a standard part of the church plan in the early Christian era.[3]

In the Eastern Orthodox tradition, the south apse is known as diaconicon and the north apse as prothesis. Various ecclesiastical features of which the apse may form part are drawn together here:

The chancel (or sanctuary), directly to the east beyond the choir contains the High Altar, where there is one (compare communion table). This area is reserved for the clergy, and was therefore formerly called the "presbytery," from the Greek presbuteros meaning "elder".[citation needed]

Hemi-cyclic choirs, first developed in the East, came to use in France in 470.[4] By the onset of the 13th century, they had been augmented with radiating apse chapels outside the choir aisle, the entire structure of Apse, Choir and radiating chapels coming to be known as the chevet (French, "headpiece").[5] Famous northern French examples of chevets are in the Gothic cathedrals of Amiens, Beauvais and Reims. Such radiating chapels are found in England in Norwich and Canterbury cathedrals, but the fully developed feature is essentially French, though the Francophile connoisseur Henry III introduced it into Westminster Abbey.[citation needed]

The word "ambulatory" refers to a curving aisle in the apse that passes behind the altar and choir, giving access to chapels in the chevet. An "ambulatory" ("walking space") may refer to the arcade passages that enclose a cloister in a monastery, or to other types of aisles round the edge of a church building, for example in circular churches.[citation needed]