Aragonese (/ˌærəɡɒˈniːz/; aragonés [aɾaɣoˈnes] in Aragonese) is a Romance language spoken by between 10,000 and 30,000 people throughout the valleys of the Pyrenees in Aragon, Spain, the comarcas of Somontano de Barbastro, Jacetania, Alto Gállego, Sobrarbe, and Ribagorza. It is the only modern language that developed from medieval Navarro-Aragonese.

While informally known as fabla ("talk" or "speech"), Aragonese is also commonly referred to by the names of its numerous local dialects, such as cheso (from Valle de Hecho) or patués (from the valley of Benasque).

Aragonese originated in the High Middle Ages, as one of many Latin dialects developed in areas around the Ebro and further north in certain parts of the Aragon River, as well as urban centers and monasteries. It expanded to the Pyrenees on top of a strong Basque-like substratum. The original Kingdom of Aragon (formed by the counties of Aragon, Sobrarbe and Ribagorza) was progressively expanded from the mountain ranges towards the South, pushing the Moors farther south in the Reconquista, thereby spreading the Aragonese language.

The dynastic union of the Catalan Counties and the Kingdom of Aragon, which formed the Aragonese Crown in the twelfth century, did not result in a merger of the languages of the two territories; Catalan continued to be spoken in the east and Navarro-Aragonese in the west, although with blurred boundaries because of dialectal continuity. The Aragonese Reconquista to the south ended in the kingdom of Murcia, which was ceded by James I of Aragon to the Kingdom of Castile as a dowry for an Aragonese princess.

The outstanding proponent of the Aragonese language was undoubtedly Johan Ferrandez d'Heredia, founder of the lineage and Grand Master of the Order of the Hospital of St. John of Jerusalem based in Rhodes. He wrote an extensive catalog of works in Aragonese and also several works translated from Greek into Aragonese, the first in medieval Europe.

The union of the crowns of Aragon and Castile and the progressive suspension of all capacity of self-rule from the sixteenth century meant that Aragonese, while still widely spoken, was limited to a rural and colloquial use, as the nobility chose Castillian as their symbol of power.

During the rule of Francisco Franco in the twentieth century and the spreading of compulsory schooling, Aragonese was regarded as a mere dialect of Spanish and was therefore frowned upon (for example, pupils were punished in schools for using it).

The constitutional democracy voted by the people in 1978 heralded the debut of literary works and studies conducted in and about the Aragonese language.

Today, Aragonese is still the native language within a core area; the Aragonese mountain ranges of the Pyrenees, in the comarcas of Somontano, Jacetania, Sobrarbe, and Ribagorza.

Aragonese is also taught as a second language by other inhabitants of the country in such areas as Huesca, Zaragoza, Ejea de los Caballeros, and Teruel. According to recent polls they only make up around 10,000 active speakers and about 30,000 passive speakers.

In 2009, the Languages Act of Aragon gave recognition of "native language, original and historic" of Aragon. There are now a number of linguistic rights, such as the use of Aragonese in the public administrations of Aragon.[4]

The Aragonese language expanded into new territories of the Kingdom of Aragon, from the 12th century until the 16th century.

Aragonese has many historical traits that join it to Catalan rather than Castillian. Some of these are conservative features that are also shared with Astur-Leonese and Portuguese, where Spanish innovated in ways that did not spread to nearby languages.

Traits shared with Spanish but not Catalan

Conservative traits not found in either Spanish or Catalan

In 2010, the Academia de l'Aragonés, formed in 2006, established a single orthographic standard in order to modernize medieval orthography and to make it more etymological. This new orthography is used by the Aragonese Wikipedia.[5]

In the sixteenth century, Aragonese Moriscoes wrote some Romance texts in Arabic writing, probably because of their inability to write in Arabic; the language in these texts shows a mixture of Aragonese and Castilian traits, and they can be considered among the last written examples of the Aragonese formerly spoken in Central and Southern Aragon.[7]

Aragonese grammar is similar to the grammar of other Iberian Romance languages, such as Spanish and Catalan.

The second article, auxiliary, after a vowel, is used with an r, whose pronunciation is the soft r.[clarification needed]

Examining the Aragonese lexicon shows the origin of Aragonese words from different languages that have influenced it.

The influence of other Romance languages on Aragonese is evident, especially from neighboring languages. Catalan and Occitan influenced Medieval Aragonese, and the Catalan influence continued, under the Crown of Aragon, in the territory where the languages are in contact (Ribagorça), a fact that explains the main characteristics of Eastern Aragonese. Since the 15th century, the Romance language which has influenced Aragonese the most is Spanish, having been adopted in almost all of Aragon as the first language and reducing Aragonese to the northern region around the Pyrenees.

Germanic words[examples needed] came through the conquest[which?] of the region by Germanic peoples[which?] in the 5th century AD.

Aragonese also has loans from Arabic and Mozarabic due to the Umayyad conquest of Hispania in the 8th century, and in turn, Arabic brought words from other languages, such as Persian and Sanskrit.[citation needed]

English, with its international importance, has introduced a lot of new words into the language.[examples needed]

Words derived from the first declension are usually feminine:

There are neutral plurals assimilated to the first declension that become feminine-gender singular:

Words that end in -or are feminine:

The names of fruit trees usually end in -era, a suffix derived from Latin -ARIA and they are usually feminine:

The genders of river names vary according to the river:

Aragonese preserves the system of clitic pronouns derived from the Latin forms inde and ibi, as en'/ne and bi/i/ie.

This feature is shared with other Romance languages (cf., Catalan en and hi, Occitan ne and i, French en and y, and Italian ne and ci), thus making Aragonese different from other Ibero-Romance languages, which lack such clitics (e.g., Spanish, Asturian, and Portuguese). 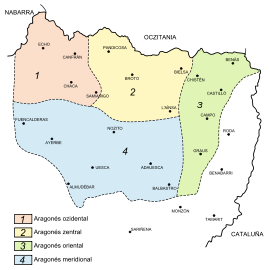 There are about 25–30 dialectal variants of Aragonese, the majority of which are in the province of Huesca, where natural isoglosses have developed around valley enclaves. Ribagorçan, is one such variant: a transitional eastern Aragonese dialect between Gascon Occitan, Catalan, and Spanish.[clarification needed]

There is a proposal[which?] to classify the language varieties into four main dialects:

For certain linguists[which?], these groups are complex dialects formed by various varieties. For others, these four groups are Aragonese dialects and Hecho Aragonese and Chistau Valley Aragonese are comarcal varieties[clarification needed].

At no point in its history did the Aragonese language acquire the prestige literature developed in other Romance languages from the Iberian Peninsula.

Not until the 12th - 13th centuries did Aragonese begin to be used in written documents. From this period are featured Liber Regum'[10] (a book of general history), Razón feita d'amor,[10] Libre dels tres reys d'orient[10] and Vida de Santa María Egipcíaca.[10][11]

Spanish was from 1500 the first language of culture in Aragon: a lot of Aragonese stood out with writings in the Spanish language, to the point that in the 17th century the Argensola brothers went to Castile to teach Spanish.[12]

Aragonese became a familiar and village language and each century acquired popular traces. The 16th was obscure: there is no document in Aragonese, just in Aljamia.[clarification needed][13] In the 17th century certain texts appeared that used the language to characterized popular characters.

In a literary contest held in Huesca in 1650, there were three poems submitted in Aragonese, respectively, by Matías Pradas, Isabel de Rodas and "Fileno, montañés".

The first pastoradas come from the 16th and the 17th century.

The 19th and 20th centuries have seen a renaissance of the Aragonese literature; however, due to the lack of a standard language, authors write about local topics, each using his own variety of the language. In 1844, the novel Vida de Pedro Saputo, by Braulio Foz, appeared in Almudévar Aragonese. In the 20th century the costumbrist comedies written by Domingo Miral gained importance, as well as the poetry of Veremundo Méndez Coarasa, both in Hecho Aragonese; in Graus Aragonese, one can highlight Cleto Torrodellas' verses and Tonón de Baldomera's popular writings; in Somontano Aragonese, there are Pedro Arnal Cavero's costumbrist narrations, as well as Juana Coscujuela' novel, A Lueca, historia d'una moceta d'o Semontano.