Aralkum is a new desert that has appeared since 1960 on the seabed once occupied by the Aral Sea.[1] It lies to the south and east of what remains of the Aral Sea in Uzbekistan and Kazakhstan. 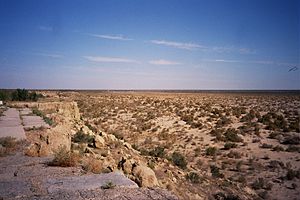 The bed of the former Aral Sea in Uzbekistan in 2004