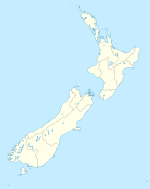 Aramoana is a small coastal settlement, 27 kilometres north of Dunedin city, in the South Island of New Zealand. The settlement's permanent population in 2001 Census was 261. Supplementing this are seasonal visitors from the city who occupy cribs. The name Aramoana is Maori for "pathway of the sea".

It is the site of New Zealand's deadliest criminal shooting, which occurred on 13 and 14 November 1990.

File:Aramoana.jpg
Looking east across the mouth of Otago Harbour; Aramoana settlement to the lower right

The settlement is located on a sand dune spit at the mouth of the Otago Harbour, opposite the end of the Otago Peninsula. The main channel of the harbour is kept clear by the Aramoana mole, an artificial breakwater which extends for 1200 metres from Aramoana. The mole was originally intended to extend another 600 meters into the ocean, however due to tidal patterns and the instability of the construction, no attempt to extend beyond the current length was thought to be possible.

To the southwestern side of the township extend expansive salty mudflats from the head of the Aramoana Spit around the habourside to the township of Te Ngaru. This area is a protected Wildlife Sanctuary, which hosts a range of plant and animal life, both native and exotic.

On the other side of the Spit is an expanse of beach, truncated by the Aramoana Mole. The beach and sand dunes to the east are known as Shelly Beach. The beach to the west is known as Big Beach and extends for over two kilometers. At points along this beach, steep rockfaces come down to the waterline. These are well used for practical training by local rock-climbers. Seals can be found sun bathing on the rocks of the spit.

The Save Aramoana Campaign was formed in 1974 to oppose the smelter. Among the leaders were three Otago psychologists: Peter Bradshaw, Jules Older and Richard Thomson. A large number of Otago artists and performers also contributed to the successful drive to Save Aramoana.

Aramoana gained notoriety as the site of a mass murder that occurred on 13 November and 14 November 1990. Resident David Gray, an unemployed gun collector, went on a rampage in which 13 people were shot dead, before Gray himself was shot by police.

A monument to the 13 victims stands on the dunes near to the Aramoana Mole.

In 2006, New Zealand director Robert Sarkies released a film based on the events, Out of the Blue.