From Infogalactic: the planetary knowledge core
(Redirected from Arbil)
Jump to: navigation, search

Erbil, also known as Hewler (Kurdish: Hewlêr‎, Central Kurdish: ھەولێر‎; Arabic: أربيل‎‎ Arbīl), is the capital of Iraqi Kurdistan. It is located northwest of Baghdad, and its governorate has a permanent population of approximately 1.61 million as of 2011.[1]

Human settlement at Erbil can be dated back to possibly 5000 BC, and it is one of the oldest continuously inhabited areas in the world.[2] At the heart of the city is the ancient Citadel of Arbil. The earliest historical reference to the region dates to the Ur III dynasty of Sumer, when king Shulgi mentioned the city of Urbilum – the ancient name of modern-day Arbil.[3][4] The city became an integral part of Assyria from the 25th century BC to the 7th century BC. Erbil was under the rule of many regional powers in turn, including the Babylonians, the Medes, the Persians and Greeks. Following the Muslim conquest of Persia, the Arabs dissolved Assyria (then known as Assuristan/Athura) as a geo-political entity in the mid-7th century AD, and during medieval times the city came to be ruled by the Seljuk and Ottoman Turks.[5]

The city was designated as Arab Tourism Capital 2014 by the Arab Council of Tourism.[7][8] In July 2014, Erbil Citadel was inscribed as a World Heritage Site by UNESCO.

The name Erbil was mentioned in Sumerian holy writings of third millennium BC as Urbilum, Urbelum or Urbillum,[4][9] Later, the Akkadians and Assyrians by a folk etymology rendered the name as arba'ū ilū to mean four gods.[10] The city became a centre for the worship of the Assyro-Babylonian goddess Ishtar which was also borrowed from Sumer god of innanna.[6] In classical times the city became known as Arbela ('Άρβηλα). In Old Persian the city was called Arbairā.[11] 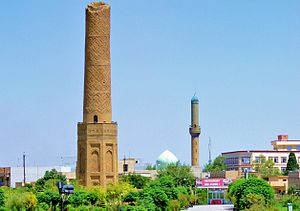 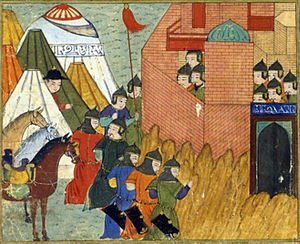 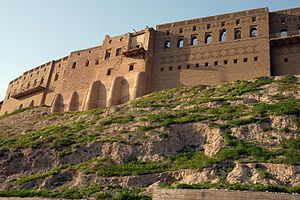 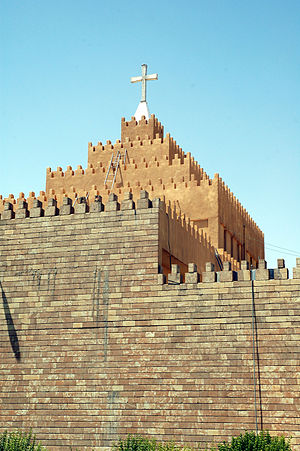 Chaldean Catholic Cathedral of Saint Joseph in Ankawa, a suburb of Erbil.

Erbil is one of the oldest continuously inhabited cities in history.[12]

The first mention of Erbil in literary sources' comes from the archives of Ebla. They record two journeys to Erbil (Irbilum) by a messenger from Ebla around 2300 BC. Later, Erridupizir, king of Gutium, captured the city in 2200 BC.[13]

Under the Median Empire, Cyaxares might have settled a number of people from the Ancient Iranian tribe of Sagartians in Arbela and Kirkuk, probably as a reward for their help in the capture of Nineveh.[14] The Persian emperor Cyrus the Great occupied Assyria in 547 BC, and established it as an Achaemenid satrapy called in Old Persian Aθurā (Athura), with Arbela as the capital.[15]

The Battle of Gaugamela, in which Alexander the Great defeated Darius III of Persia in 331 BC, took place approximately 100 kilometres (62 mi) west of Erbil. After the battle, Darius managed to flee to the city, and, somewhat inaccurately, the confrontation is sometimes known as the "Battle of Arbela".

Erbil became part of the region disputed between Rome and Persia under the Sasanids. The ancient Assyrian kingdom of Adiabene (the Greek form of Ḥadyab) had its center at Erbil, and the town and kingdom are known in Jewish Middle Eastern history for the conversion of the royal family to Judaism.[16] Its populace then converted from the Mesopotamian Religion during the 1st and 2nd centuries to Church of the East Christianity, with Pkidha traditionally becoming its first bishop around 104 AD.[17][18] The metropolitanate of Ḥadyab in Arbela (Syriac: ܐܪܒܝܠ Arbel) became a centre of eastern Syriac Christianity until late in the Middle Ages.[19]

Arbela (Urbilum) was founded by Sumer as almost all Middle East city or town names include "ur" (Ur-bilum) are common names of Sumer. Erbil city was destroyed by Akkadians and later on Assyrian were replaced Akkadians.[20] As many of the Aramaic-speaking Assyrians adapted Biblical (including Jewish) names, most of the early bishops had Eastern Aramaic or Jewish/Biblical names, which does not suggest that many of the early Christians in this city were converts from Judaism.[21] It served as the seat of a Metropolitan of the Assyrian Church of the East. From the city's Christian period come many church fathers and well-known authors in Syriac.

Following the Muslim conquest of Persia, the Sasanid province of Asuristan, of which Erbil made part of, was dissolved.

When the Mongols invaded the Near East in the 13th century, they attacked Arbil for the first time in 1237. They plundered the lower town but had to retreat before an approaching Caliphate army and had to put off the capture of the citadel.[22] After the fall of Baghdad to Hülegü and the Mongols in 1258, they returned to Arbil and were able to capture the citadel after a siege lasting six months.[23] Hülegü then appointed an Assyrian Christian governor to the town and there was an influx of Jacobites, who were allowed to build a church.

As time passed, sustained persecutions of Christians, Jews and Buddhists throughout the Ilkhanate began in earnest in 1295 under the rule of Oïrat amir Nauruz.[24] This manifested early on in the reign of the Ilkhan Ghazan. In 1297, after Ghazan had felt strong enough to overcome Nauruz's influence, he put a stop to the persecutions.

During the reign of the Ilkhan Öljeitü the Christian inhabitants retreated to the citadel to escape persecution. In the Spring of 1310, the Malek (governor) of the region attempted to seize it from them with the help of the Kurds. Despite Mar Yahballaha's best efforts to avert the impending doom, the citadel was at last taken by Ilkhanate troops and Kurdish tribesmen on July 1, 1310, and all the defenders were massacred, including all the Christian inhabitants of the lower town.[25][26]

The city's Aramaic-speaking Assyrian population remained significant until the destruction of the city by the forces of Timur in 1397.[27]

In the Middle Ages, Erbil was ruled successively by the Umayyads, the Abbasids, the Buwayhids, the Seljuks and then the Atabegs of Erbil (1131–1232), under whom it was a Turkmen state; they were in turn followed by the Ilkhanids, the Jalayirids, the Kara Koyunlu, the Timurids, and the Ak Koyunlu. Erbil was the birthplace of the famous 12th and 13th century Kurdish historians and writers Ibn Khallikan and Ibn al-Mustawfi. Erbil and all of Iraq passed into the hands of the Ottoman Turks in the 16th century. Erbil was part of the Musul Vilayet in Ottoman Empire for 400 years until 1918.

The modern town of Erbil stands on a tell topped by an Ottoman fort. During the Middle Ages, Erbil became a major trading centre on the route between Baghdad and Mosul, a role which it still plays today with important road links to the outside world.

Today, the Kurds form the largest ethnic group in the city, with smaller numbers of Arabs, Assyrians, Turcoman, Armenians and Mandeans also extant.

The parliament of the Kurdistan Autonomous Region was established in Erbil in 1970 after negotiations between the Iraqi government and the Kurdistan Democratic Party (KDP) led by Mustafa Barzani, but was effectively controlled by Saddam Hussein until the Kurdish uprising at the end of the 1991 Gulf War. The legislature ceased to function effectively in the mid-1990s when fighting broke out between the two main Kurdish factions, the Kurdistan Democratic Party and the Patriotic Union of Kurdistan (PUK). The city was captured by the KDP in 1996 with the assistance of the Iraqi government of Saddam Hussein. The PUK then established an alternative Kurdish government in Sulaimaniyah. KDP claimed that on March 1996 PUK asked for Iran's help to fight KDP. Considering this as a foreign attack on Iraq's soil, the KDP asked the Iraqi government for help.

The Kurdish Parliament in Erbil reconvened after a peace agreement was signed between the Kurdish parties in 1997, but had no real power. The Kurdish government in Erbil had control only in the western and northern parts of the autonomous region. During the 2003 Invasion of Iraq, a United States special forces task force was headquartered just outside Erbil. The city was the scene of celebrations on April 10, 2003 after the fall of the Ba'ath regime.

During the US occupation of Iraq, sporadic attacks hit Erbil. Parallel bomb attacks against Eid celebrations killed 109 people on February 1, 2004.[28] Responsibility was claimed by the Ansar al-Sunnah,[28] and stated to be in solidarity with Ansar al-Islam.[citation needed] A suicide bombing on May 4, 2005 killed 60 civilians and injured 150 more outside a police recruiting center.[29]

The Erbil International Airport opened in the city in 2005.

Downtown Erbil was a project for a large-scale mixed-use complex in Erbil. The project would have been coordinated by Emaar Properties, the GCC's largest real estate developer. Emaar is well known for international big projects like Downtown Dubai and Burj Khalifa. The project was launched in 2013 and will cover an area of 541,000 square meters. This area will be used for residential apartments, hotels and a shopping mall. The project was cancelled in 2014.[30]

Aura Erbil is another new project with a high standard of living, which is coordinated by Zardman.[31]

The Citadel of Arbil is a tell or occupied mound in the historical heart of Erbil, rising between 25 and 32 metres (82 and 105 ft) from the surrounding plain. The buildings on top of the tell stretch over a roughly oval area of 430 by 340 metres (1,410 ft × 1,120 ft) occupying 102,000 square metres (1,100,000 sq ft). It has been claimed that the site is the oldest continuously inhabited town in the world.[36] The earliest evidence for occupation of the citadel mound dates to the 5th millennium BC, and possibly earlier. It appears for the first time in historical sources during the Ur III period, and gained particular importance during the Neo-Assyrian period. West of the citadel at Ary Kon quarter, a chamber tomb dating to the Neo-Assyrian period has been excavated.[6] During the Sassanian period and the Abbasid Caliphate, Erbil was an important center for Christianity and the Assyrians. After the Mongols captured the citadel in 1258, Erbil's importance began to decline.

During the 20th century, the urban structure was significantly modified, as a result of which a number of houses and public buildings were destroyed. In 2007, the High Commission for Erbil Citadel Revitalization (HCECR) was established to oversee the restoration of the citadel. In the same year, all inhabitants, except one family, were evicted from the citadel as part of a large restoration project. Since then, archaeological research and restoration works have been carried out at and around the tell by various international teams and in cooperation with local specialists, and many areas remain off-limits to visitors due to the danger of unstable walls and infrastructure. The government plans to have 50 families live in the citadel once it is renovated.

The only religious structure that currently survives in the citadel is the Mulla Afandi Mosque. When it was fully occupied, the citadel was divided in three districts or mahallas: from east to west the Serai, the Takya and the Topkhana. The Serai was occupied by notable families; the Takya district was named after the homes of dervishes, which are called takyas; and the Topkhana district housed craftsmen and farmers. Other sights to visit in the citadel include the bathing rooms (hammam) built in 1775 located near the mosque and the Textile Museum.[37] Erbil citadel has been inscribed on the World Heritage List on June 21, 2014 .

Female genital mutilation in Erbil has a 58 percent prevalence in the age group 15–49.[38] 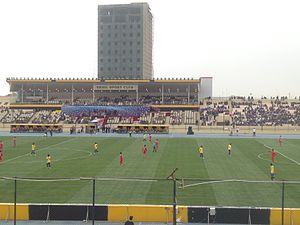 The local major football team is Erbil SC which plays its football matches at Franso Hariri Stadium (named after the assassinated Assyrian politician Franso Hariri) which is based in the south part of central Erbil. Erbil SC were the first Kurdish team to make it to the AFC Champions league.

Garden and Parks in Erbil