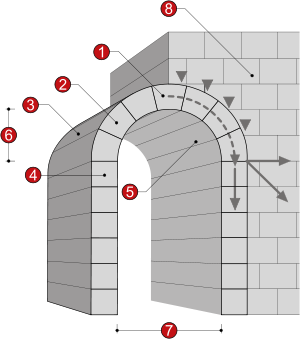 An arch is a curved structure that spans a space and may or may not support weight above it.[1] Arch may be synonymous with vault but vault may be distinguished as a continuous arch[2] forming a roof. Arches appeared as early as the 2nd millennium BC in Mesopotamian brick architecture[3] and their systematic use started with the Ancient Romans who were the first to apply the technique to a wide range of structures.

An arch is a pure compression form.[4] It can span a large area by resolving forces into compressive stresses and, in turn eliminating tensile stresses. This is sometimes referred to as arch action.[5] As the forces in the arch are carried to the ground, the arch will push outward at the base, called thrust. As the rise, or height of the arch decreases, the outward thrust increases.[6] In order to maintain arch action and prevent the arch from collapsing, the thrust needs to be restrained, either with internal ties, or external bracing, such as abutments.[7] 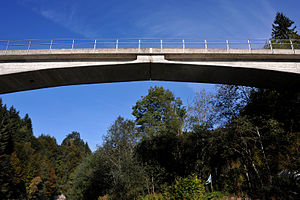 Rossgraben bridge (Rüeggisberg) near Bern, Switzerland, showing the hinge at mid-span of this three-hinged arch.

The most common true arch configurations are the fixed arch, the two-hinged arch, and the three-hinged arch.[8]

Another advantage of the three-hinged arch is that the pinned bases are more easily developed than fixed ones, allowing for shallow, bearing-type foundations in medium-span structures. In the three-hinged arch, "thermal expansion and contraction of the arch will cause vertical movements at the peak pin joint but will have no appreciable effect on the bases," further simplifying the foundation design.[7]

Arches have many forms, but all fall into three basic categories: Circular, pointed, and parabolic. Arches can also be configured to produce vaults and arcades.[7] 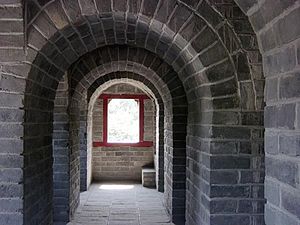 Roman aqueduct near Nîmes, France: An example of an arcade, employing the circular arch. 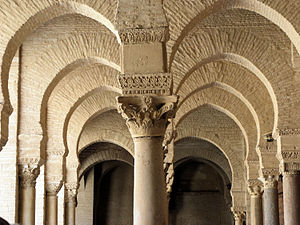 Horseshoe arches (9th century) in the Mosque of Uqba, in Kairouan, Tunisia. 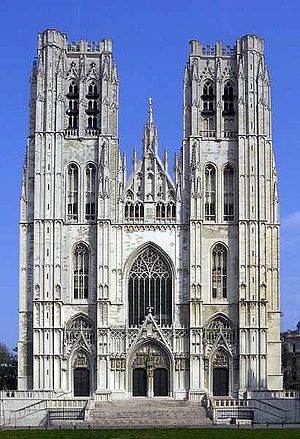 Cathedral of St. Michael and St. Gudula in Brussels, Belgium, with its central, pointed arch window, typical of Gothic architecture. 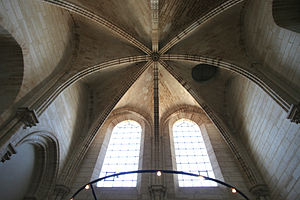 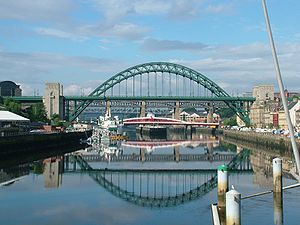 Tyne Bridge in Newcastle upon Tyne, England: An example of a parabolic arch used in bridge design. 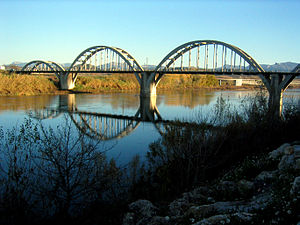 Pont d'arcades in Móra d'Ebre, Catalonia: the bridge is designed as a series of parabolic arches.

Types of arches displayed chronologically, roughly in the order in which they were developed:

True arches, as opposed to corbel arches, were known by a number of civilizations in the Ancient Near East and the Levant, but their use was infrequent and mostly confined to underground structures such as drains where the problem of lateral thrust is greatly diminished.[15] A rare exception is the Bronze Age arched city gate of Ashkelon (modern day Israel), dating to ca. 1850 B.C.[16] An early example of a voussoir arch appears in the Greek Rhodes Footbridge.[17] Corbel arches were found in other parts of ancient Asia, Africa, Europe and the Americas. In 2010, a robot discovered a long corbel arch-roofed passageway underneath the Pyramid of Quetzalcoatl which stands in the ancient city of Teotihuacan north of Mexico City, dated to around 200 AD.[18]

The ancient Greeks introduced the arch to Italy visible today in the south of the peninsula and in Sicily.

The ancient Romans learned the arch from the Etruscans, refined it and were the first builders to tap its full potential for above ground buildings:

The Romans were the first builders in Europe, perhaps the first in the world, fully to appreciate the advantages of the arch, the vault and the dome.[19]

Throughout the Roman empire, their engineers erected arch structures such as bridges, aqueducts, and gates. They also introduced the triumphal arch as a military monument. Vaults began to be used for roofing large interior spaces such as halls and temples, a function that was also assumed by domed structures from the 1st century BC onwards.

The segmental arch was first built by the Romans who realized that an arch in a bridge did not have to be a semicircle,[20][21] such as in Alconétar Bridge or Ponte San Lorenzo. They were also routinely used in house construction as in Ostia Antica (see picture).

The first example of early Gothic arch in Europe is set in Sicily in the Greek fortifications of Gela. The semicircular arch was followed in Europe by the pointed Gothic arch or ogive whose centreline more closely followed the forces of compression and which was therefore stronger. The semicircular arch can be flattened to make an elliptical arch as in the Ponte Santa Trinita. Both the parabolic and the catenary arches are now known to be the theoretically strongest forms. Parabolic arches were introduced in construction by the Spanish architect Antoni Gaudí, who admired the structural system of Gothic style, but for the buttresses, which he termed "architectural crutches". The catenary and parabolic arches carry all horizontal thrust to the foundation and so do not need additional elements. The first examples of the pointed arch in the European architecture are in Sicily and dates back to the Arab-Norman period.

The horseshoe arch is based on the semicircular arch, but its lower ends are extended further round the circle until they start to converge. The first known built horseshoe arches are known from Aksum (modern day Ethiopia and Eritrea) from around the 3rd–4th century, around the same time as the earliest contemporary examples in Roman Syria, suggesting either an Aksumite or Syrian origin for the type of arch.[22][page needed]

Since it is a pure compression form, the arch is useful because many building materials, including stone and unreinforced concrete can resist compression but are weak when tensile stress is applied to them.[23]

An arch is held in place by the weight of all of its members, making construction problematic. One answer is to build a frame (historically, of wood) which exactly follows the form of the underside of the arch. This is known as a centre or centring. The voussoirs are laid on it until the arch is complete and self-supporting. For an arch higher than head height, scaffolding would in any case be required by the builders, so the scaffolding can be combined with the arch support. Occasionally arches would fall down when the frame was removed if construction or planning had been incorrect. (The A85 bridge at Dalmally, Scotland suffered this fate on its first attempt, in the 1940s[citation needed]). The interior and lower line or curve of an arch is known as the intrados.

Old arches sometimes need reinforcement due to decay of the keystones, forming what is known as bald arch.

In reinforced concrete construction, the principle of the arch is used so as to benefit from the concrete's strength in resisting compressive stress. Where any other form of stress is raised, such as tensile or torsional stress, it has to be resisted by carefully placed reinforcement rods or fibres.[24] 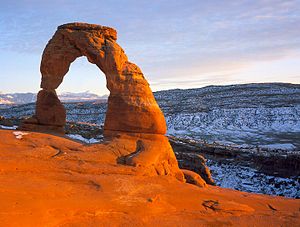 The Delicate Arch, a natural arch near Moab, Utah

A blind arch is an arch infilled with solid construction so it cannot function as a window, door, or passageway.

Natural rock formations may also be referred to as arches. These natural arches are formed by erosion rather than being carved or constructed by man. See Arches National Park for examples.

A special form of the arch is the triumphal arch, usually built to celebrate a victory in war. A famous example is the Arc de Triomphe in Paris, France.