From Infogalactic: the planetary knowledge core
(Redirected from Archaeological Area of Agrigento)
Jump to: navigation, search

The Valle dei Templi (Italian pronunciation: [ˈvalle dei ˈtɛmpli; ˈtempli]; English: Valley of the Temples; Sicilian: Vaddi di li Tempri) is an archaeological site in Agrigento (ancient Greek Akragas), Sicily, southern Italy. It is one of the most outstanding examples of Greater Greece art and architecture, and is one of the main attractions of Sicily as well as a national monument of Italy. The area was included in the UNESCO Heritage Site list in 1997. Much of the excavation and restoration of the temples was due to the efforts of archaeologist Domenico Antonio Lo Faso Pietrasanta (1783–1863), who was the Duke of Serradifalco from 1809 through 1812. The archaeological park and landscape of the Valley of the Temples is the largest archaeological site in the world with 1,300 hectares.[1]

The term "valley" is a misnomer, the site being located on a ridge outside the town of Agrigento. 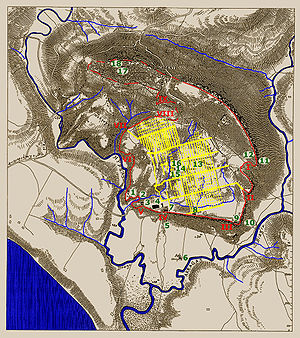 The Valley includes remains of seven temples, all in Doric style. The ascription of the names, apart from that of the Olympeion, are a mere tradition established in Renaissance times. The temples are:

The Valley is also home to the so-called Tomb of Theron, a large tuff monument of pyramidal shape; scholars suppose it was built to commemorate the Romans killed in the Second Punic War. 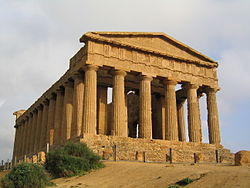 Plan of the temple of Concordia.

Due to its good state of preservation, the Temple of Concordia is ranked amongst the most notable edifices of the Greek civilization existing today. Notably the UNESCO symbol alludes to this temple 6 column facade. It has a peristatis of 6 x 13 columns built over a basement of 39.44 x 16.91 m; each Doric column has twenty grooves and a slight entasis, and is surmounted by an architrave with triglyphs and metopes; also perfectly preserved are the tympani. The cella, preceded by a pronaos, is accessed by a single step; also existing are the pylons with the stairs which allowed to reach the roof and, over the cella's walls and in the blocks of the peristasis entablature, the holes for the wooden beam of the ceiling. The exterior and the interior of the temple were covered by polychrome stucco. The upper frame had gutters with lion-like protomes, while the roof was covered by marble tiles.

When the temple was turned into a church the entrance was moved to the rear, and the rear wall of the cella was destroyed. The spaces between the columns were closed, while 12 arched openings were created in the cella, in order to obtain a structure with one nave and two aisles. The pagan altar was destroyed and sacristies were carved out in the eastern corners. The sepultures visible inside and outside the temple date to the High Middle Age. 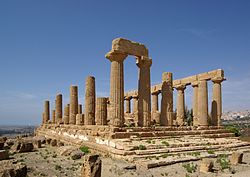 This temple was constructed on a mostly artificial spur. It dates to c. 450 BC, measuring 38.15 x 16.90 m: it is in Doric style, peripteros 6 columns wide by 13 long, preceded by a pronaos and opisthodomos. The basement has four steps.

Current remains (including anastylosis from the 18th Century onwards) consist of the front colonnade with parts of the architrave and of the frieze. Only fragments of the other three sides survive, with few elements of the cella. The building was damaged in the fire of 406 BC and restored in Roman times, with the substitution of marble tiles with ones of clay, and the addition of a steep rise in the area where today can be seen the remains of the altar.

Nearby are arcosolia and other sepultures from Byzantine times, belonging to the late 6th century AD renovation of the Temple of Concordia into a Christian church.

The temple of Asclepius is located in the middle of the San Gregorio plane. Its identification is based on a mention by Polybius (I, 18, 2), who states that the temple was "in front of the city", one mile away. However, as the actual distance does not correspond and the size of the building is relatively small, scholars remains dubious about this attribution.

The small temple, probably dating to the late 5th century BC and measuring 21.7 x 10.7 m, rises over a basement with three steps. Its peculiarity is the fake opysthodomus with two semi-columns in the external side of the rear cella. Also extant are parts of the entablature, with lion-like protomes, a frieze and a geison pediment.

The sanctuary housed a bronze statue of Apollo by Myron, a gift to the city by Scipio, which was stolen by Verres.[2]

Remains of the Temple of Heracles.

The traditional name of this temple comes from another mention by Cicero[3] about a temple dedicated to the classical hero "not far from the forum"; however, it has never been proven the latter (the agora of the Greek city) was located in this point.

Stylistically, the temple belongs to the last years of the 6th century BC. It has been also suggested that this temple was one of the first built under Theron. Also the entablature, of which parts have been found, would date it to the 470-460s or the middle 5th century BC (though the more recent remains could be a replacement of the older ones). One hypothesis is that the temple was begun before the Battle of Himera, to be completed only in the following decades. Polyaenus mentions a temple of Athena being built under Theron outside the city, which could be identified with that of "Hercules", though also with a new one in the inner acropolis.

The building, with 20th-century anastylosis, measures 67 x 25.34 m, with a peristais of 6 x 15  Doric columns and a cella with pronaos and opysthodomus, is located over a three-step basement. It is the first example (later become common in the Agrigento temples) of pylons inserted between the pronaos and cella, housing the stair which allowed inspections of the roof. The columns are rather high and have wide capitals. On the eastern side are remains of the large altar. 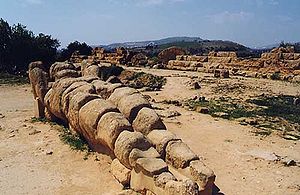 Remains of one atlas in the Olympeion field.

Panorama Remains of one original atlas in the Olympeion field

Panorama Remains of one reconstructed atlas in the Olympeion field

On the other side of the road running through the Golden Gate of the ancient city, is a plain commanded by the huge Olympeion field. This includes a platea with a large temple to Olympian Zeus, plus other areas still under investigation. These include a sanctuary, with remains of a paved square, a complex sacellum ("holy enclosure") and a tholos. This, after another gate, is followed by a sanctuary of chthonic deities, an archaic sanctuary, the so-called colimbetra (where was a still unknown gate) and the tip of the spur where the sanctuary is located, with the temple of Vulcan.

The Olympeion complex's main attraction is the huge temple of Olympian Zeus, which was described with enthusiastic words by Diodorus Siculus and mentioned by Polybius.[4] Today it is reduced to ruins due to destruction begun in antiquity and continued through the 18th century, when the temple was used as a quarry for the port of Porto Empedocle.

Near the south-western corner of the temples is a small edifice (12,45 x 5,90 m) with two naves and a deep pronaos, a double entrance and what has been identified as an altar. Its dating is controversial, though scholars have assigned it to the archaic era, due to the discovery of numerous 6th century BC vases. Also archaic is another sacellum, which later was replaced by a classical edifice. These are followed by the scant remains of a temple (called "Tempio L") dating to the mid-5th century BC, measuring 41.8 x 20.20 meters, to which, in the 3rd century BC, a Hellenistic entablature was added. 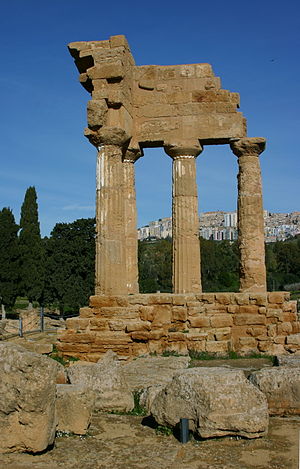 The re-assembled remains of the Temples of "Castor and Pollux".

Temple of the Dioscuri

North to the Tempio L are the corner of "Temple of Castor and Pollux", which is in a fact a modern reconstruction from the early 19th century, created using pieces from various other temples. It includes four columns and an entablature mounted over the foundings of an originary temple 31 x 13.39 m, and which would have been a Doric perypteros with 6 x 13 columns, and which dated to about the mid-5th century BC.

On the other side of the valley is the last spur of the hill, commanded by the remains of the Temple of Vulcan. It is a Doric-style building from the 5th century BC, with an archaic sacellumm enclosed into a Classic-era cella. The sacellum measures 13.25 x 6.50 meters; its decoration, dating to c. 560-550 BC, has been recently reconstructed. The classic temple, a Doric perypteros, measured 43 x 20.85 meters, rising mounted on a four-step krepidoma and having 6 x 13 columns; it dates to around 430 BC.

At the western tip of the area in which the Temple of Concordia lies, are parts of a late-ancient or early-medieval necropolis, constructed on existing cisterns. Other tombs and catacombs are visible in the so-called Grotte Fragapane, dating to the 4th century AD.

These late-Roman and Byzantine necropolises lie in an area used for tombs since ancient times. One of these, the so-called Tomb of Theron, is a naiskos sepulchre with square plan. Gate IV is located near the tomb of Theron: probably one of the most important in the city, as it led to the sea.

West of the Olympeion, are remains of two insulae (residences) 38 m wide, connected by a square to the ancient Gate V. It is likely that they were built re-using structures belonging to the sacred area of the Olympeion. Nearby is a sanctuary with an L-shaped portico from the early 5th century BC, which is annexed to Gate V. In the area are also two archaic (mid-6th century BC) temples.

On the northern side of Gate V is a large stone square leading to the "Sanctuary of the Chthonic Gods".