The Greek territories and colonies during the Archaic period.

The Archaic period in Greece (800–480 BC) is a period of ancient Greek history that followed the Greek Dark Ages. This period saw the rise of the poleis (singular polis, generally translated as "city-state"), the founding of colonies, the annexation of some of the eastern poleis by the Persian empire, as well as the first inklings of classical philosophy. The newly invented Greek theater created tragedies that were performed during Dionysia; written poetry appeared alongside the reintroduction of written language, which had been lost during the Greek Dark Ages; and the oral epics, the Iliad and the Odyssey were written down for the first time, ostensibly by Homer himself. The term archaic thus covers cultural developments as well as social, political and economic changes.

The starting point of the Archaic period in 800 BC is defined as the "structural revolution", meaning the sudden upsurge of population and material goods that occurred c. 750 BC, and the "intellectual revolution" of classical Greece.[1] The sharp rise in population at the start of the Archaic period led the settlement of new towns and the expansion of the older population centers within poleis. Increases in the population also led to the establishment of colonies along the Mediterranean and Black Sea coasts that began about 800 BC. The reason for this phenomenon has been described by Greek authors as stenochoria, or "the lack of land", but in practice it was caused by a great number of reasons, such as rivalry between political groups, a desire for adventure, expatriation, the search for trade opportunities, etc.[2] The end of archaism is conventionally marked by Xerxes' invasion of Greece in 480 BC.

The term archaic describes things belonging to ancient times and is derived from the Greek word archaikos, which means primitive.[3] This term arose from the study of Greek art, where it mainly refers to styles of surface decoration and sculpture, placing it chronologically between geometric and Classical Greek art. These styles are considered archaic in the sense that they contain the seeds of Classical art. Modern historians think of the term archaic as a misnomer,[4] as the archaic period is considered to be one of the most fruitful periods of Greek history.[5]

Crisis and consolidation of the polis

Mycenaean Greece of the Bronze Age had been divided into kingdoms, each containing a territory and a population distributed into both small towns and large estates owned by the nobility. Each kingdom was ruled by a king claiming authority under divine right by descent from a heroic ancestor who ruled from a palace situated within a citadel, or acropolis. During the Greek Dark Ages, the palaces, kings, and estates vanished, the population declined, towns were abandoned or became villages in ruins, and government devolved into authority being held by minor officials on a tribal structure.

By the middle of the 8th century the societal structure of Greece had come under immense pressure, and the polis was at risk of collapse. Three distinct pressures developed for each stratum of archaic society- the farmers, the aristocracy, and the commoners. By 750 BC these pressures had become impossible to reconcile due to an explosive growth of population of about 4% per year. These three factors were in many ways connected and tended to reinforce one another.[6]

Greek farmers lived under a subsistence lifestyle and were frequently subject to crop failures. Hesiod wrote of many different circumstances that could befall an archaic Greek farmer, all of which would force him to borrow goods from his neighbours. Failure to pay back these goods could lead to loss of the farm, debt, or enslavement. Due to the sharp increase in population, arable farmland, which had always been scarce, became insufficient to support all the people in Greece. 750-600 BC in Greece was marked by widespread famines, and by 600 BC almost all of the farmers in Athens had been dispossessed of their property and worked as slaves on the same.

The aristoi, aristocratic families, were constantly competing against one another to gain territory, money, or status. The elegant clothes, jewellery, pottery, artworks etc. from the archaic period were by and large made to the tastes of this part of Greek society. Aristoi in the archaic period existed in a closed community of symposion, festivals, lavish meals, and athletic games that had nothing to do with the commoners or farmers of Greece. However an aristoi's status was predicated on his wealth - if he were to lose it, he would also lose his nobility. The advent of sea trade routes placed the aristoi at risk of losing everything through failed overseas investments.[6]

The commoners the aristoi governed were repeatedly drawn into the conflicts of the aristoi as soldiers, disrupting their lives with every new power struggle between nobles. They levied much criticism at the aristoi for neglecting the farmers and for living very extravagant lifestyles. As overseas trade became more common in Greece, some commoners found themselves very wealthy, and increasingly began to challenge the authority of the aristoi, posing a political threat to regional monarchies.[6]

Reorganization and consolidation of Athens

From the beginning of the 6th century BC, many changes in the social structure and government of Greece were formalized in order to administer to the growing needs of the poleis. Among these changes was the formalization of certain aspects of the Athenian democracy, and as Athens consolidated itself into a formal city-state, political tensions grew within it.

Towards the end of the Archaic period, the power of the basileus, or king, was reduced as aristocratic gatherings, such as the Council of Elders, increased in power. The sharing of power among powerful families occurred in many poleis, which saw oligarchies established. The Archaic Period was also marked by tyrants, or strong rulers who seized power from the aristocracy and ruled as central, dominating figures.[7] A new form of government had evolved, the city-state, which Hellenes termed the polis. The kingdoms were not restored, even though in many cases offshoots of the royal families remained. Instead, each major population center became autonomous and was ruled by a republican form of government. The ancient Greek term is synoikismos, from which comes the term synoecism "conurbation", meaning the absorption of villages and the incorporation of their tribes into the substructure of the polis. The akropoleis became the locations of public buildings, typically temples.[8]

As a reaction to the overpopulation, economic problems, and rising political tension within Greece between 750 and 600 BC, many Greeks left the mainland by ship to establish new colonies. Some went freely to escape tensions, while others were sent as exiles. Any given expedition consisted of about 100-200 people, mostly young men, and was led by a Greek noble, searching to gain more power and wealth outside of Greece. A citizen who left Greece to go to one of these colonies gave up his Greek citizenship in exchange for citizenship in the new colony.

These colonies were widespread, and arose in places including southern Italy, Sicily, Sardinia, Corsica, the southern French coast, the eastern Spanish coast, the coast of the Black Sea, and Cyprus, among others. These colonies were not provinces of the poleis from which they came but independent cities entirely, who traced their heritage back to a mother polis within Greece proper. Relations between colonial Greeks and the indigenous populations of the countries they governed were mixed - some cultures met in harmony and others were conquered and enslaved by the Greeks. An important consequence of Greek colonization was the spread of Greek culture, religion, and design throughout the Mediterranean, including sites that would come to great importance later in history.[6]

The exceptional success of the move to colonize the rest of the Mediterranean happened in harmony with a consolidation of the Greek poleis into cohesive city-states with social and political order. This process was frequently interrupted between the 6th and 7th centuries BC by numerous aristocrats. These tyrants, a Greek word meaning "ruler of the polis", tended to set up dictatorships within the poleis, raise armies, and attack other poleis to expand their influence. Tyrants were not social reformers, but while ruling they were forced to make laws and arbitrate disputes. A rising Greek distaste for tyrants led to the creation of alternative systems of self-government, which eventually led to the Athenian democracy. Tyrants were never directly followed by pure democracies; however, their behaviour created the political will among the Greeks to develop a more efficient and fair system of governance.[6] 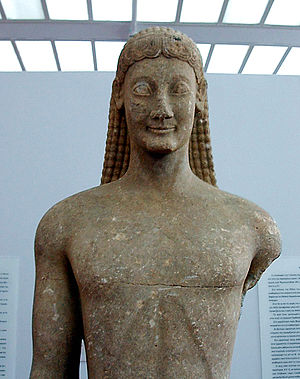 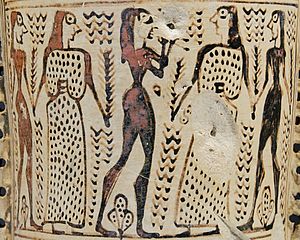 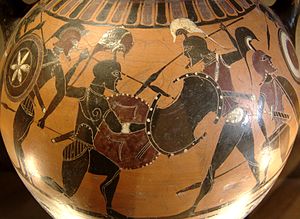 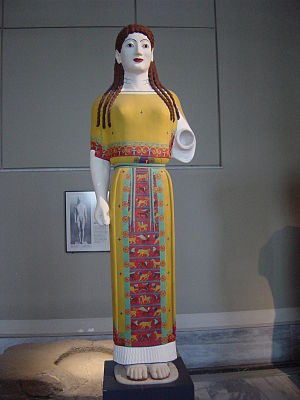 Reconstructed colour kore statue from the archaic period of Greece

The period takes its name from what, in art history, was considered the archaic or old-fashioned style of sculpture and other forms of art and craft that were characteristic of that time, as opposed to the more natural look of work made in the following Classical period (see Classical sculpture).

Sculptures in limestone and marble, terra cotta, bronze, wood, and rarer metals, both free-standing and in relief, were used to adorn temples and funerary monuments. They mostly had mythical or daily life themes. The creation of life-sized statues began suddenly at about 650 BC. The following three periods have been identified:[9]

In pottery, the Archaic period saw the development of the orientalizing style, which signalled a shift away from the geometric style of the earlier Dark Ages and the accumulation of influences derived from Phoenicia and Syria.

Pottery styles associated with the later part of the Archaic age are black-figure pottery, which originated in Corinth during the 7th century BC, and its successor, the red-figure style, developed by the Andokides painter in about 530 BC.

Some notable distinctions an observer can use to determine if a piece is from the archaic period are the Egyptian-like "left foot forward", the "archaic smile", and the very patterned and conventionalized hair, or "helmet hair".