From Infogalactic: the planetary knowledge core
Jump to: navigation, search
This article is about the spiritual beings. For other uses, see Archangel (disambiguation). 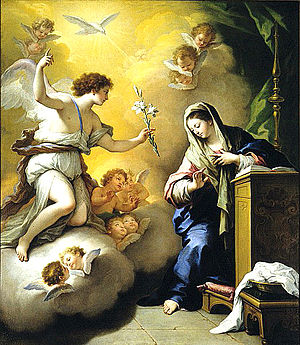 The Annunciation by Paolo de Matteis

An archangel /ˌɑːrkˈeɪndʒəl/ is an angel of high rank. Beings similar to archangels are found in a number of religious traditions; but the word "archangel" itself is usually associated with the Abrahamic religions.

Michael and Gabriel are recognised as archangels in Judaism, Islam, and by most Christians. The Book of Tobit—recognised in the Catholic and Orthodox Bibles, but considered apocryphal by Protestants—mentions Raphael, who is also considered to be an archangel. The archangels Gabriel, Michael, and Raphael are venerated in the Roman Catholic Church with a feast on September 29 (between 1921 and 1969, March 24 for Gabriel and October 24 for Raphael), and in the Eastern Orthodox Church on November 8 (if the Julian calendar is used, this corresponds to November 21 in the Gregorian). The named archangels in Islam are Gabriel, Michael, Israfil and Azrael. Jewish literature, such as the Book of Enoch, mentions Metatron as an archangel, called the "highest of the angels", though the acceptance of this angel is not canonical in all branches of the faith.

Some branches of the faiths mentioned have identified a group of seven Archangels, but the actual angels vary, depending on the source. Gabriel, Michael, and Raphael are always mentioned; the other archangels vary, but most commonly include Uriel, who is mentioned in 2 Esdras.

An increasing number of experts in anthropology, theology and philosophy, believe that Zoroastrianism contains the earliest distillation of prehistoric belief in angels.[3]

The Amesha Spentas of Zoroastrianism are likened to archangels. They individually inhabit immortal bodies that operate in the physical world to protect, guide, and inspire humanity and the spirit world. The Avesta explains the origin and nature of archangels or Amesha Spentas.[3]

To maintain equilibrium, Ahura Mazda engaged in the first act of creation, distinguishing his Holy Spirit Spenta Mainyu, the Archangel of righteousness. Ahura Mazda also distinguished from himself six more Amesha Spentas, who, along with Spenta Mainyu, aided in the creation of the physical universe. Then he oversaw the development of sixteen lands, each imbued with a unique cultural catalyst calculated to encourage the formation of distinct human populations. The Amesha Spentas were charged with protecting these holy lands and through their emanation, also believed to align each respective population in service to God.[4]

The Amesha Spentas (amesha meaning eternal & spenta meaning brilliance and beneficence) as attributes of God are: 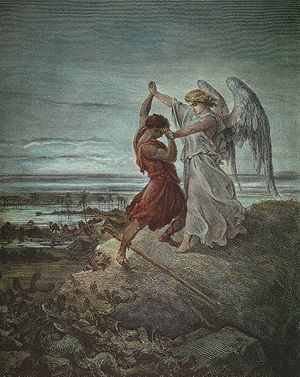 Jacob wrestling with the Angel by Gustave Doré 1885

The Hebrew Bible uses the terms מלאכי אלוהים (malakhi Elohim; Angels of God),[5] "The Hebrew word for angel is "malach," which means messenger, for the angels are God's messengers to perform various missions." מלאכ י י (malakhi Adonai; Angels of the Lord),[6] בני אלוהים (b'nai elohim; sons of God) and הקדושים (ha-q'doshim; the holy ones) to refer to beings traditionally interpreted as angelic messengers. Other terms are used in later texts, such as העליונים (ha-elyonim, the upper ones, or the ultimate ones). Indeed, angels are uncommon except in later works such as the Book of Daniel, though they are mentioned briefly in the stories of Jacob (who, according to several interpretations, wrestled with an angel) and Lot (who was warned by angels of the impending destruction of the cities of Sodom and Gomorrah). Daniel is the first biblical figure to refer to individual angels by name.[7] It is therefore widely speculated that Jewish interest in angels developed during the Babylonian captivity.[8] According to Rabbi Simeon ben Lakish of Tiberias (230–270 CE), specific names for the angels were brought back by the Jews from Babylon.

There are no explicit references to archangels in the canonical texts of the Hebrew Bible (Old Testament). In post-Biblical Judaism, certain angels came to take on a particular significance and developed unique personalities and roles. Though these archangels were believed to have rank amongst the heavenly host, no systematic hierarchy ever developed. Metatron is considered one of the highest of the angels in Merkavah and Kabbalist mysticism and often serves as a scribe. He is briefly mentioned in the Talmud,[9] and figures prominently in Merkavah mystical texts. Michael, who serves as a warrior and advocate for Israel (Daniel 10:13), is looked upon particularly fondly. Gabriel is mentioned in the Book of Daniel (Daniel 8:15-17) and briefly in the Talmud,[10] as well as many Merkavah mystical texts. The earliest references to archangels are in the literature of the intertestamental periods (e.g., 4 Esdras 4:36).

In the Kabbalah there are ten archangels, each assigned to one sephira: Metatron, Raziel (other times Jophiel), Tzaphkiel, Tzadkiel, Khamael, Raphael, Haniel, Michael, Gabriel and Sandalphon. Chapter 20 of the Book of Enoch mentions seven holy angels who watch, that often are considered the seven archangels: Michael, Raphael, Gabriel, Uriel, Saraqael, Raguel, and Remiel.[11] The Life of Adam and Eve lists the archangels as well: Michael, Gabriel, Uriel, Raphael and Joel. Medieval Jewish philosopher Maimonides made a Jewish angelic hierarchy. 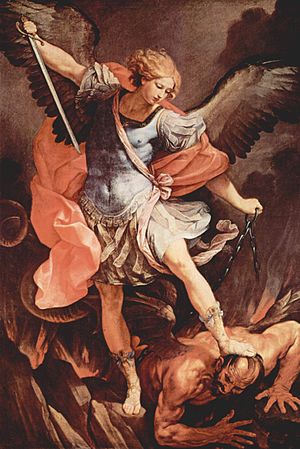 The New Testament speaks frequently of angels (for example, angels giving messages to Mary, Joseph, and the shepherds; angels ministering to Christ after his temptation in the wilderness, an angel visiting Christ in his agony, angels at the tomb of the risen Christ, the angels who liberate the Apostles Peter and Paul from prison); however, it uses the word "archangel" only twice. The earlier mention is in 1 Thessalonians: "For the Lord himself shall descend from heaven with a shout, with the voice of the archangel, and with the trump of God: and the dead in Christ shall rise first" (King James Version);[12] "For the Lord himself will descend from heaven with a cry of command, with the voice of an archangel, and with the sound of the trumpet of God. And the dead in Christ will rise first" (English Standard Version).[13] The later mention is in the Epistle of Jude: "Yet Michael the archangel, when contending with the devil he disputed about the body of Moses, durst not bring against him a railing accusation, but said, The Lord rebuke thee" (King James Version)[14] 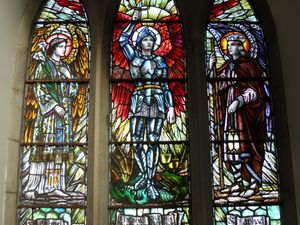 In Roman Catholicism, three are honored by name:

The last-named of these identifies himself in Tobit 12:15(NAB) thus: "I am Raphael, one of the seven angels who stand and serve before the Glory of the Lord."

The Fourth Book of Esdras, which mentions the angel Uriel, was popular in the West and was frequently quoted by Church Fathers, especially Ambrose, but was never considered part of the Catholic biblical canon.[15]

The Catholic Church gives no official recognition to the names given in some apocryphal sources, such as Raguel, Saraqael and Remiel (Book of Enoch) or Izidkiel, Hanael, and Kepharel (other such sources).[16] 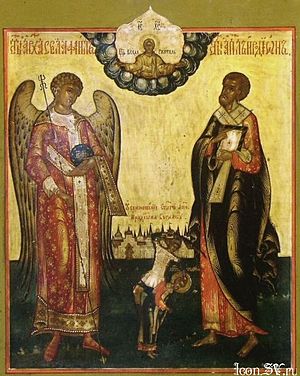 Herodion of Patras and Archangel Selaphiel 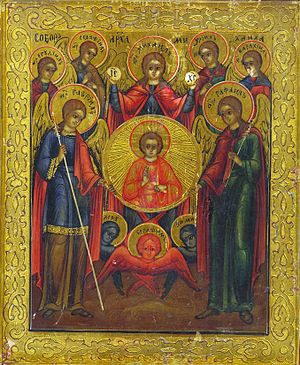 Angelic Council, Orthodox icon of the seven archangels, left to right: Jegudiel, Gabriel, Selaphiel, Michael, Uriel, Raphael, Barachiel. Beneath the mandorla of Christ-Immanuel (God is with us) are representations of Cherubim (blue) and Seraphim (red).

Eastern Orthodox Tradition mentions "thousands of archangels;[17] however, only seven archangels are venerated by name.[18] Uriel is included, and the other three are most often named Selaphiel, Jegudiel, and Barachiel (an eighth, Jeremiel, is sometimes included as archangel).[19] The Orthodox Church celebrates the Synaxis of the Archangel Michael and the Other Bodiless Powers on November 8 of Stencyl the Eastern Orthodox liturgical calendar (for those churches which follow the Julian Calendar, November 8 falls on November 21 of the modern Gregorian Calendar). Other feast days of the Archangels include the Synaxis of the Archangel Gabriel on March 26 (April 8), and the Miracle of the Archangel Michael at Colossae on September 6 (September 19). In addition, every Monday throughout the year is dedicated to the Angels, with special mention being made in the church hymns of Michael and Gabriel. In Orthodox iconography, each angel has a symbolic representation:[19]

In the canon of the Ethiopian Orthodox Tewahedo Church, 1 Enoch describes Saraqael as one of the angels that watch over "the spirits that sin in the spirit." (20:7, 8). 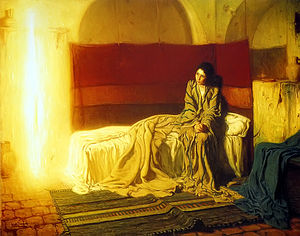 The Annunciation, by Henry Ossawa Tanner

The Protestant Bible provides names for two angels: "Michael the archangel" and the angel Gabriel, who is called "the man Gabriel" in Daniel 9:21. Protestants who reject the apocrypha view Michael as the sole archangel, since he is the only one explicitly described as such in the Bible in Jude 1:9.[20][21]

Seventh-day Adventists hold that "Michael" and "archangel" are just other titles for the Lord Jesus Christ, who is not a created being but the Eternal Word of God, "very God of very God, of the same substance as the Father". They credit Presbyterian Matthew Henry as supporting this view.[22]

Jehovah's Witnesses believe that there is only one archangel (Michael), based on the literal meaning of the Greek word ἀρχάγγελος: "chief angel". They also believe that the definite article at Jude 9 ("Michael the archangel") means there is only one archangel. Citing 1 Thessalonians 4:16 (NWT), which says: "because the Lord himself will descend from heaven with a commanding call, with an archangel's voice and with God's trumpet", they conclude that Michael is another name for Jesus in heaven.[23]

The Church of Jesus Christ of Latter-day Saints (LDS Church) interprets the term archangel as meaning "Chief Angel",[24] Michael is the only individual so-designated in the Latter Day Saints canon.[25] It is believed that he is the head of all of the angels.[24] LDS Church doctrine also states that the archangel Michael was the first man, Adam.[26]

Though no other being is identified as an "archangel," Joseph Smith taught that the angel Gabriel was known in mortality as Noah[27] and the angel Raphael is a being of significant standing even though he has never been identified with any mortal prophet.[28]

In Islam, the named archangels[29] include:

Occultists sometimes associate archangels in Kabbalistic fashion with various seasons or elements, or even colors. In some Kabbalah-based systems of ceremonial magic, all four of the main archangels (Gabriel, Michael, Raphael and Uriel) are invoked as guarding the four quarters, or directions, and their corresponding colors are associated with magical properties.[32] Lucifer or Sataniel in Judeo-Christian traditions, or Iblis in Islam, is considered an archangel by Satanists and many non-Satanists, but non-Satanists consider him evil and fallen from God's grace. 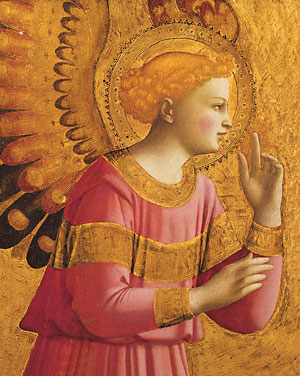 In art, archangels are sometimes depicted with larger wings. Some of the more commonly represented archangels are Gabriel, Michael, Raphael, and Uriel.[33]

In the lesser ritual of the pentagram, the invocation includes the words "Before me Raphael; Behind me Gabriel; On my right hand Michael; On my left hand Auriel [Uriel]..."[34]

Archangels are portrayed in numerous films and TV-series'.