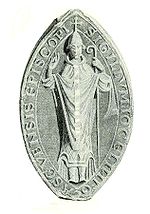 The seal or signet of Jocelin, a Cistercian monk and former Abbot of Melrose, who became one of the most significant bishops of Glasgow.

The Archbishop of Glasgow is an archiepiscopal title that takes its name after the city of Glasgow in Scotland. The title was abolished by the Church of Scotland in 1689; and, in the Scottish Episcopal Church, it is now part the bishopric of Glasgow and Galloway. In the Roman Catholic Church, the title was restored by Pope Leo XIII in 1878.

The Diocese of Glasgow originates in the period of the reign of David I, Prince of the Cumbrians, but the earliest attested bishops come from the 11th century, appointees of the Archbishop of York. The episcopal seat was located at Glasgow Cathedral. In 1492, the diocese was elevated to an archdiocese by Pope Innocent VIII. After the Scottish church broke its links with Rome in 1560, the archbishopric continued under the independent Scottish church until 1689 when Episcopacy in the Church of Scotland was finally abolished, requiring continuity to occur in the disestablished Scottish Episcopal Church.

In the following centuries Roman Catholicism slowly began a process of re-introduction, culminating in 1829 with legalisation through the Catholic Emancipation Act. A new papally-appointed archbishopric was introduced when the Vicariate Apostolic of the Western District was elevated to archdiocese status on 4 March 1878 on the Restoration of the Scottish hierarchy, and then to Metropolitan archdiocese status on 25 May 1947.

The archdiocese covers an area of 1,165 km². The Metropolitan See is in the City of Glasgow where the seat is located at the Cathedral Church of Saint Andrew.

(Any dates appearing in italics indicate de facto continuation of office. The start date of tenure below is the date of appointment or succession. Where known, the date of installation and ordination as bishop are listed in the notes together with the post held prior to appointment.)