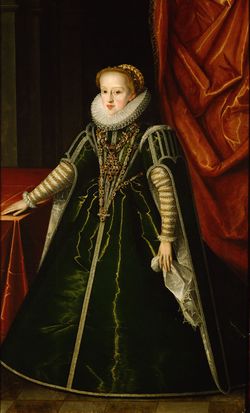 She was the daughter of Archduke Charles II of Austria, the son of Emperor Ferdinand I, and Maria Anna of Bavaria. Her elder brother Archduke Ferdinand, succeeded as Holy Roman Emperor in 1619.

Born in Graz, her godparents were Pope Gregory XIII and her maternal aunt, Maximiliana Maria of Bavaria.[1] Named after both, Gregoria Maximiliana was described as extremely pious and had the closest relationship to her mother among her siblings.

In addition to the Habsburg inferior lip,[2] Gregoria Maximiliana suffered from a deformed shoulder and a scarred face.[3]

On 17 September 1597 the Prince of Asturias made a visit to the Imperial court in Graz. At this time, Gregoria Maximiliana was seriously ill and she compared her suffering to the prisoners of the Turkish sultan.[6] Three days later, she died aged sixteen, and was in buried in Seckau Abbey.[7] Gregoria Maximiliana's fiancé married her sister Margaret in 1599.