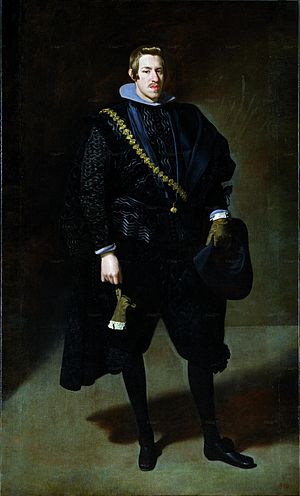 Portrait of the infante Don Carlos by Diego Velázquez, 1626/27

Charles was the younger brother of Philip IV and as long as the King remained childless was heir to the Spanish throne. Charles was never a friend of Philip's favourite and prime minister, the Count-Duke of Olivares, and though he was uninterested in politics, he was used by various nobles in attempts to overthrow Olivares.

During his brother's severest illness, Charles was on the point of ascending the throne but Philip recovered and in 1629 finally fathered a son, Balthasar Charles. This dissipated Charles' political importance completely.

Charles was one of the era's most enigmatic characters due to his strange and possibly unhealthy personality.[clarification needed] He died in 1632, aged 25. Francisco de Quevedo dedicated a sonnet entitled The Burial of the Most Serene Infante Don Carlos to this event.