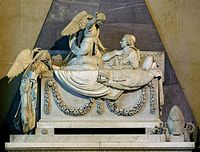 Tomb of Archduke Karl of Austria-Este, by Giuseppe Pisani.

Born His Imperial & Royal Highness Archduke Karl Ambrosius of Austria-Este, the sixth son of Archduke Ferdinand of Austria-Este (son of Maria Theresa of Austria and governor of Italy) and of his wife, Princess Maria Beatrice Ricciarda d'Este, Duchess of Massa and Princess of Carrara, Lady of Lunigiana.

He spent his youth in Monza, where his family had fled after the French invasion of the Duchy of Modena. After staying in Verona, Padua, Trieste and Ljubljana, his family moved in Wiener Neustadt.

Because of his fragility, he was intended for church life. He became Bishop of Vác in 1806 and Archbishop of Esztergom, two years later, making him Primate of Hungary.
He died one year later at the age of 24.