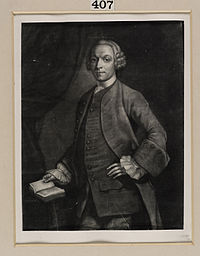 Archibald Cameron of Lochiel (1707–7 June 1753) was a doctor and prominent leader in the Jacobite uprising of 1745. On 7 June 1753, at Tower Hill, he was the last Jacobite to be executed for high treason.

Archibald Cameron was born in 1707, the sixth child (and third surviving son) of John Cameron, the 18th Lochiel by his wife Isabel née Campbell.[1]

Cameron's father ("The Lochiel") had participated in the failed 1715 Jacobite Rebellion and, as a result, became an exile, living first in Paris and then Boulogne and not returning to Scotland until November 1745. Cameron's elder brother was Donald Cameron of Lochiel (the Clan Cameron chief in the absence of their father), known in Jacobite history as "The Gentle Lochiel".

Cameron initially attended Glasgow University to read law, before studying medicine instead at Edinburgh University; he completed further studies at the Sorbonne in Paris and the University of Leiden in Holland. He subsequently returned to the Scottish Highlands, married his Lochaber cousin, Jean Cameron,[2] and fathered seven children.[3]

When Charles Edward Stuart ("Bonnie Prince Charlie") first arrived in Scotland, Cameron was despatched by his brother to Loch nan Uamh to communicate the futility of the enterprise and persuade the Prince to return to France.[4] However, Prince Charles persuaded him otherwise and soon the Camerons joined him in armed revolt. In late August 1745, Archibald Cameron first saw action, helping to lead a fairly futile attack on Ruthven Barracks.[5] In the campaign that followed, Cameron seems to have been promoted to the rank of lieutenant-colonel in his brother's clan regiment.[6] (although the Newgate Calendar's hagiography portrays him as being a pacificist by nature, refusing to offer more than his surgical skills in the cause - this is likely to be an exaggeration[7] since Cameron was slightly wounded in action at the Battle of Falkirk in January 1746;[8] subsequently he is recorded as having administered surgery on his brother after he was seriously wounded at the Battle of Culloden (suffering two broken ankles and other injuries). Defeat at that battle ended the Jacobite hopes and both brothers and their father became fugitives running from the English Redcoats.

After the burning of the family seat, Achnacarry House, the Cameron family hid at Badenoch. However, despite the danger, the Prince was determined to meet with The Lochiel and Archibald Cameron was sent to Loch Arkaig to escort the Prince to the family hiding place (3 September). The whole party then moved to Ben Alder, the seat of Ewen MacPherson of Cluny, keeper of the Loch Arkaig treasure. At Ben Alder Castle, on 13 September 1746, word came that French naval ships were waiting at Loch nan Uamh, and on these the whole party escaped to France on 19 September.

In exile, Cameron remained in Prince Charles' service, travelling with him to Madrid in 1748 and returning to Scotland privately in 1749. In 1753, he was sent back to Scotland again to obtain money from Loch Arkaig[9] and to participate in a desperate plot to assassinate George II and other members of the Royal family. However, while staying secretly at Brenachyle by Loch Katrine, he was betrayed (by MacDonell of Glengarry, the notorious "Pickle the spy", and members of his own clan who were this time sickened by his Jacobitism[10] and arrested. He was charged under the 1746 Act of Attainder for his part in the 1745 Uprising. He was imprisoned in Edinburgh Castle then taken to Tower Hill in London and sentenced to death.[11] On 7 June 1753, at Tyburn, he was drawn on a sledge and hanged for 20 minutes before being cut down and beheaded. His remains were buried in the Savoy Chapel, Westminster;[12] being the last Jacobite to receive the death penalty. In his final papers, written from prison, he still protested his undying loyalty to the Jacobite cause and his episcopalian principles.[13]

In 1753, John Cameron of Dochanassie composed a song in Gaelic in commemoration of Cameron's life, "A Song to Doctor Cameron".[14]

Cameron is a leading character in D. K. Broster's 1927 novel The Gleam in the North, the second in her Jacobite trilogy.