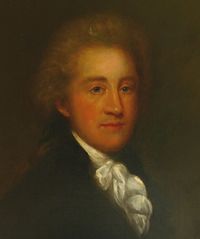 The 9th Earl of Dundonald.

The son of Thomas Cochrane, 8th Earl of Dundonald, he joined the British Army as a youth and also served time in the Royal Navy before returning to Culross in 1778 after inheriting the Earldom of Dundonald from his father. He inherited a title and family lands but little money. Left with no other means of support, Archibald turned to invention.

Cochrane's most noted invention was a method for making coal tar (patented in 1781) on an industrial scale. The British Tar Company invested in a works; it was managed by John Loudon McAdam. The coke byproduct was used, in part, by an ironworks at Muirkirk, and the flammability of the coal gas byproduct was recognised but not capitalized on.[1] McAdam bought the company, but the deal was troubled.[2]

Cochrane hoped that he would be able to sell tar as a sealant for the hulls of ships to the Royal Navy. After contacts with the British Admiralty were made, a test was performed on a buoy. The buoy was coated on one side and left uncoated on the other. After some time the uncoated half was leaking and full of worms and barnacles, while the treated half was in quite good condition. A patent for his invention was drawn up, while the family estates were used as collateral.

The coal tar technique was a rival to copper sheathing, preferred by the Admiralty.[3] It has been argued that were also powerful interests at play, shipyards needing the maintenance business. The patent expired, and the Royal Navy eventually adopted the tar mixture.

Other experiments with alum production, making bread from potatoes, and paint manufacturing also proved unprofitable. His experiments with producing soda from table salt proved more successful but were not enough to reverse his financial misfortunes.

In 1784, close to the Society's inception, he was elected a Fellow of the Royal Society of Edinburgh. His proposers were James Hutton and Adam Smith.[4]

Cochrane died impoverished in Paris at the age of 83. The earldom of Dundonald passed to his son Thomas Cochrane.

Cochrane's younger brothers also had notable careers. John Cochrane (1750-1801) and Basil Cochrane (1753-1826) were supply contractors for the British army and navy; Basil in particular made a fortune providing supplies to the navy in India. Alexander Cochrane (1758-1832) became an admiral. George (b. 1762) served in the army and in Parliament. Andrew (1767-1833) was an army officer, colonial governor, member of Parliament, and fraudster.

The Earl of St. Vincent, Admiral of the Fleet, wrote of the Cochrane brothers in 1806, "The Cochranes are not to be trusted out of sight, they are all mad, romantic, money-getting and not truth-telling—and there is not a single exception in any part of the family."[5]