Geikie was born in Edinburgh in 1835, the eldest son of musician and music critic James Stuart Geikie and his wife Isabella Thom. The elder brother of James Geikie, he was educated at Edinburgh High School and University of Edinburgh.

In 1855 was appointed an assistant on the British Geological Survey. Wielding the pen with no less facility than the hammer, he inaugurated his long list of works with The Story of a Boulder; or, Gleanings from the Note-Book of a Geologist (1858). His ability at once attracted the notice of his chief, Sir Roderick Murchison, with whom he formed a lifelong friendship, and whose biographer he subsequently became.[2]

With Murchison some of his earliest work was done on the complicated regions of the schists of the Scottish Highlands; and the small geological map of Scotland published in 1862 was their joint work: a larger map was issued by Geikie in 1892. In 1863 he published an important essay "On the Phenomena of the Glacial Drift of Scotland", in Transactions of the Geological Society of Glasgow, in which the effects of ice action in that country were for the first time clearly and connectedly delineated.[2]

In 1865 Geikie's Scenery of Scotland (3rd edition, 1901) was published, which was, he claimed, the first attempt to elucidate in some detail the history of the topography of a country. In the same year he was elected a Fellow of the Royal Society.[3] At this time the Edinburgh school of geologists, prominent among them Sir Andrew Ramsay, with his Physical Geology and Geography of Great Britain were maintaining the supreme importance of denudation in the configuration of land surfaces, and particularly the erosion of valleys by the action of running water. Geikie's book, based on extensive personal knowledge of the country, was an able contribution to the doctrines of the Edinburgh school, of which he himself soon began to rank as one of the leaders.[2] 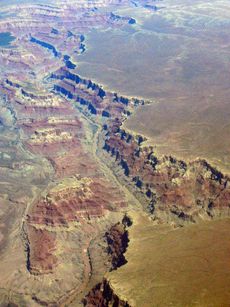 The Grand Canyon, Arizona, at the confluence of the Colorado and Little Colorado rivers

In 1867, when a separate branch of the Geological Survey was established for Scotland, he was appointed director. On the foundation of the Murchison professorship of geology and mineralogy at the University of Edinburgh in 1871, he became the first occupant of the chair.[2] He continued to hold these two appointments until 1881. In that year, he was awarded the Murchison Medal of the Geological Society of London[citation needed] and he succeeded Sir Andrew Ramsey in the joint offices of Director-General of the Geological Survey of the United Kingdom and Director of the Museum of Practical Geology, London, from which he retired in February 1901. A feature of his tenure of office was the impetus given to microscopic petrography, a branch of geology to which he had devoted special study, by a splendid collection of thin sections of British rocks. Later he wrote two Survey Memoirs, The Geology of Central and Western Fife and Kinross (1900), and The Geology of Eastern Fife (1902).[2]

From the outset of his career, when he started to investigate the geology of Skye and other of the Western Isles, he took a keen interest in volcanic geology, and in 1871 he brought before the Geological Society of London an outline of the Paleogene (then termed Tertiary) volcanic history of Britain. Many difficult problems, however, remained to be solved. Here he was greatly aided by his extensive travels not only throughout Europe, but in western America. While the canyons of the Colorado River confirmed his long-standing views on erosion, the volcanic regions of Wyoming, Montana and Utah supplied him with valuable data in explanation of volcanic phenomena. The results of his further researches were given in an essay entitled "The History of Volcanic Action during the Tertiary Period in the British Isles," in Transactions of the Royal Society of Edinburgh (1888). His views on volcanic geology were delivered in his presidential addresses to the Geological Society of London in 1891 and 1892 and afterward embodied in his book The Ancient Volcanoes of Great Britain (1897). Other results of his travels are collected in Geological Sketches at Home and Abroad (1882).[2]

In 1897 he issued a Geological Map of England and Wales, with Descriptive Notes. In 1898 he delivered the Romanes Lectures, which was published under the title of Types of Scenery and their Influence on Literature. The study of physical geography in Great Britain improved largely due to his efforts. Among his works on this subject is The Teaching of Geography (1887). His other books include Scottish Reminiscences (1904) and Landscape in History and other Essays (1905).[2] His Birds of Shakespeare was published in 1916.[citation needed] 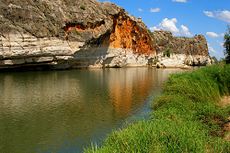 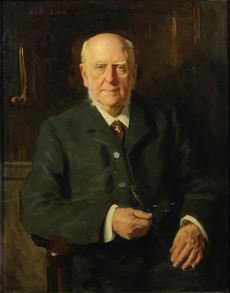 He received the honorary Doctor of Laws (LL.D) from the University of Glasgow in June 1901.[4]

In 1905 he won the RSGS Livingstone Medal.

Dorsa Geikie, a wrinkle ridge system on the Moon, and the mineral geikielite, a magnesium-titanium oxide, are both named after him, as is Geikie Gorge in the Napier Range in the Kimberley Region of Western Australia.

He died at his home, "Shepherd's Down" in Haslemere, Surrey and is buried there in the village churchyard.[8]

He had married in 1871 Alice Gabrielle Anne Marie Pignatel, daughter of Eugene Pignatel of Lyons; they had a son Roderick (killed in early life) and three daughters.