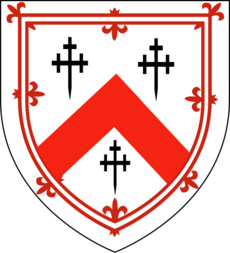 Coat of arms of the Marquess of Ailsa

It is unclear who is the heir presumptive to the family's other titles, which, depending on the terms of the original letters patent which granted the peerages, can be inherited by a female, therefore making the Marquess' daughter Lady Rosemary Margaret Kennedy potentially the heir to those titles. However, a dispute on the inheritance of the Earldom and the Lordship arose on the death of The 8th Earl of Cassillis in 1759 between an heir male and an heir general (through the female line) was resolved by the Court of Session and the House of Lords in 1762 in favour of the heir male. This would indicate, based on precedent, that the Earldom of Cassillis and the Kennedy Lordship will pass to the brother of the current Marquess as heir presumptive.[8][9]