From Infogalactic: the planetary knowledge core
Jump to: navigation, search
File:Wellsfargojax.jpeg
The Wells Fargo Center is one of the city's most iconic buildings

The architecture of Jacksonville is notably marked by the city's early predominant position as Florida's financial and insurance center. Numerous buildings in the city have held state height records, dating as far back as 1902,[1] and last holding the record from 1974 to 1981.[2] It is important to note that few structures in the city center predate the Great Fire of 1901.[3]

Contributing heavily during the reconstruction period following the Great Fire of 1901, a young New York architect named Henry John Klutho would come to influence generations of local designers. Klutho's works exhibit elements influenced by both the Chicago School, championed by Louis Sullivan, and the Prairie School of architecture, popularized by Frank Lloyd Wright. As a result, Jacksonville has one of the largest collections of Prairie Style buildings outside the Midwest.[4]

By the 1950s, modernist design principles would permeate throughout the United States, transforming the rapidly growing State of Florida.[5] During this period, local architects Robert C. Broward, Taylor Hardwick, and William Morgan adapted a range design principles, including International style, Brutalism, Futurism and Organicism, all applied with an American interpretation generally referred to today as Mid-century modern design.[6] The architecture firms of Reynolds, Smith & Hills (RS&H)[7] and Kemp, Bunch & Jackson (KBJ) have also contributed a number of important works to the city's modern architectural movement. In particular, KBJ has designed more buildings in the contemporary skyline of Jacksonville than any other architectural firm. Of the 30 tallest buildings in the city, 17 are associated with KBJ.[8] With the notable exception of works by architects Robert A. M. Stern, Welton Becket, Paul Rudolph, and Helmut Jahn, many of Jacksonville's modern landmarks were designed locally. 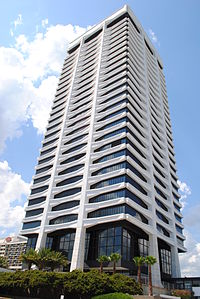 Chronology of the tallest buildings in Jacksonville: 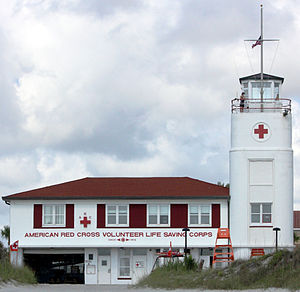 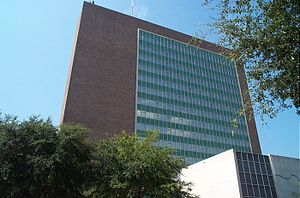 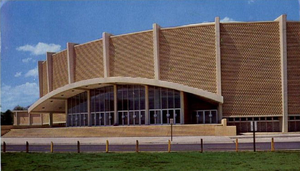 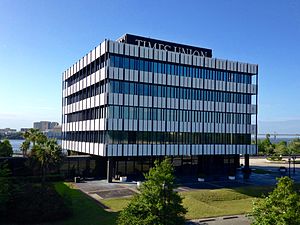 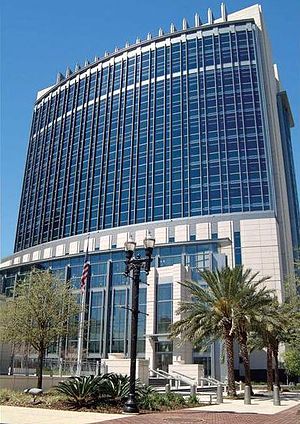 Jacksonville architects used many design styles and belonged to a variety of architectural schools. Below is a list of those styles and schools.

A section of the Jacksonville skyline in daytime.