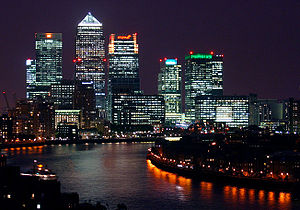 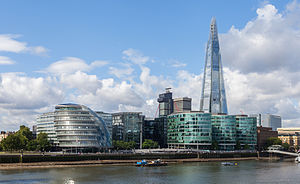 London is not characterised by any particular architectural style, having accumulated its buildings over a long period of time. Few structures predate the Great Fire of 1666, with notable exceptions including the Tower of London, Westminster Abbey, Banqueting House and several scattered Tudor survivors in the City of London.

The City itself contains a wide variety of styles, progressing through Wren's late 17th-century churches and the financial institutions of the 18th and 19th century such as the Royal Exchange and the Bank of England, to the early 20th century Old Bailey (England and Wales' central criminal court) and the 1960s Barbican Estate. Notable recent buildings are the 1980s skyscraper Tower 42, the Lloyd's building with services running along the outside of the structure, and the 2004 Swiss Re building, known as the "Gherkin".

London's generally low-rise nature makes these skyscrapers and others such as One Canada Square and its neighbours at Canary Wharf and the BT Tower in Fitzrovia very noticeable from a distance. High-rise development is restricted at certain sites if it would obstruct protected views of St. Paul's Cathedral. Nevertheless, there are plans for more skyscrapers in central London (see Tall buildings in London), including the 72-storey "Shard of Glass", which is now completed and currently stands as the tallest building in the European Union.

Other notable modern buildings include City Hall in Southwark with its distinctive ovular shape, the British Library in Somers Town, the Great Court of the British Museum, and the striking Millennium Dome next to the Thames east of Canary Wharf. The 1933 Battersea Power Station by the river in the southwest is a local landmark, whilst some railway termini are excellent examples of Victorian architecture, most notably St Pancras and Paddington. London County Council was responsible for public housing projects such as the Edwardian Bourne Estate in Holborn.

Several monuments pay homage to people and events in the city. The Monument in the City of London provides views of the surrounding area whilst commemorating the Great Fire of London which originated nearby. Marble Arch and Wellington Arch, at the north and south ends of Park Lane respectively, have royal connections, as do the Albert Memorial and Royal Albert Hall in Kensington. Nelson's Column is a nationally recognised monument in Trafalgar Square, providing a focal point for the whole central area.

Since 2004, the London Festival of Architecture is held in June, and focuses on the importance of architecture and design in London today. 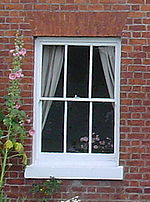 During the Georgian era (1714-1830), London increased in size greatly to take in previously separate village such as Clapham, hence much of inner London is dominated by Georgian buildings. Georgian houses in London are quite distinctive and in general can be easily distinguished from those built later. Common features include the following:

London has a growing number of Skyscrapers with twelve buildings under construction to rise above 100 metres (328 ft) with a further 44 approved. The Shard London Bridge (topped out in Spring 2012) is the tallest building in the European Union being 310 metres (1,016 ft) high.

Artist's impression of the central London skyline in 2015. Note: Tower Hamlets - the other area with a high concentration of existing and prospective high-rise buildings - is not shown.