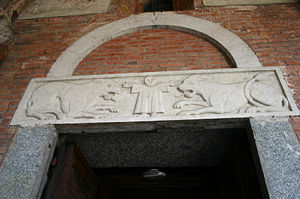 Architrave of the left-side portal in the facade of Sant'Ambrogio basilica in Milan, Italy 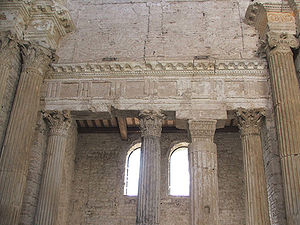 An architrave (/ˈɑːrkᵻtreɪv/; from Italian: architrave, also called an epistyle; from Greek ἐπίστυλον epistylon "door frame") is the lintel or beam that rests on the capitals of the columns. It is an architectural element in Classical architecture.

The word architrave is also used to refer more generally to a style of mouldings (or other elements) framing the top of a door, window or other rectangular opening, where the horizontal "head" casing extends across the tops of the vertical side casings where the elements join (creating a butt joint, as opposed to a miter joint).[1] In the construction industry, the term is applied also to the vertical members of the frame around a door or window.

In classical entablature, it is the lowest part of the entablature consisting of architrave, frieze and cornice. The word is derived from the Greek and Latin words arche and trabs combined together to mean "main beam". The architrave is different in the different orders. In the Tuscan, it only consists of a plain face, crowned with a fillet, and is half a module in height. In the Doric and composite, it has two faces, or fasciae; and three in the Ionic and Corinthian, in which it is 10/12 of a module high, though but half a module in the rest.[2]