From Infogalactic: the planetary knowledge core
(Redirected from Archtop)
Jump to: navigation, search

An archtop guitar is a steel-stringed acoustic or semi-acoustic guitar with a full body and a distinctive arched top, whose sound is particularly popular with jazz players.

Typically, an archtop guitar has:

A 1918 "The Gibson" acoustic guitar, with a 13th fret neck join, circular soundhole and floating bridge. This was a transitional model with no f-holes and a much smaller body than the classic archtop.

The archtop guitar is often credited[1] to Orville Gibson, whose innovative designs led to the formation of the Gibson Mandolin-Guitar Mfg. Co, Ltd in 1902. His 1898 patent for a mandolin, which was also applicable to guitars according to the specifications, was intended to enhance "power and quality of tone." Among the features of this instrument were a violin-style arched top and back, each carved from a single piece of wood, and thicker in the middle than at the sides; sides carved to shape from a single block of wood; and a lack of internal "braces, splices, blocks or bridges … which, if employed, would rob the instrument of much of its volume of tone."[2][3] However, Gibson was not the first to apply violin design principles to the guitar. Guitar maker A. H. Merrill, for example, patented in 1896 a very modern looking instrument "of the guitar and mandolin type … with egg-shaped hoop or sides and a graduated convex back and top."The instrument featured a metal tailpiece and teardrop shaped "f-holes," and strongly resembled the archtop guitars of the 1930s. James S. Back obtained patent #508,858 in 1893 for a guitar (which also mentions applicability to mandolins) that among other features included an arched top, which were produced under the Howe Orme name. Another transitional design is the parlor guitar fitted with a floating bridge and tailpiece. These inexpensive instruments, manufactured by companies such as Stella and Harmony, are associated with early blues musicians. The earliest Gibson designs (L1 to L3) introduced the arched top, and increasing body sizes, but still had round or oval sound holes.

In 1922, Lloyd Loar was hired by the Gibson Company to redesign their instrument line in an effort to counter flagging sales, and in that same year the Gibson L5 was released to his design. Although the new instrument models flopped commercially and Loar left Gibson after only a couple of years, Gibson instruments signed by Loar now are among the most prized and celebrated in stringed-instrument history. Perhaps the most revered instrument from this period is the F5 mandolin, but probably the more broadly influential was the L5 guitar, which remains in production to this day. The mature Gibson archtop guitar and its imitators are regarded as the quintessential "jazzbox".

The Gibson ES-150, the first electric archtop (1936). Note the 'Charlie Christian' Style pickup. A heavy affair mounted inside the guitar with 3 bolts through the top. Used by Charlie Christian.

Archtop guitars were subsequently made by many top American luthiers, notably John D'Angelico of New York and Jimmy D'Aquisto, William Wilkanowski, Charles Stromberg and Son in Boston, and by other major manufacturers, notably Gretsch and Epiphone. In Europe, companies such as Framus, Höfner and Hagström took up the manufacture of archtops. Archtop guitars were particularly adopted by both jazz and country musicians, and in big bands and swing bands.

Gibson's ES-150 guitar is generally recognized as the world's first commercially successful Spanish-style electric guitar. The ES stands for Electric Spanish, and it was designated 150 because it cost $150, along with an EH-150 amplifier and a cable. After its introduction in 1936, it immediately became popular in jazz orchestras of the period. Unlike the usual acoustic guitars utilized in jazz, it was loud enough to take a more prominent position in ensembles. Jazz guitarist Eddie Durham is usually credited with making the first electric guitar solo, but it was ES-150 player Charlie Christian who popularized the jazz guitar as a solo, not just a rhythm instrument. The ES-150's top was not carved on the underside, making it unsuitable for acoustic use.

The two-pickup Gibson ES-175 archtop guitar has been in production continuously since 1949.

In 1951, Gibson released the L5CES, an L5 with a single cutaway body and two electric pickups, equally playable as either an acoustic guitar or an electric guitar. This innovation was immediately popular, and while purely acoustic archtop guitars such as the Gibson L-7C remain available to this day, they have become the exception. In 1958, the L5CES was redesigned with humbucking pickups; most, but certainly not all, subsequent archtop guitars conform loosely to the pattern set by this model[citation needed]. The electric archtop was particularly popular with jazz musicians Tal Farlow, Barney Kessel and Johnny Smith. 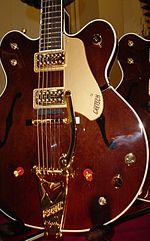 Other manufacturers introduced electric archtop guitars, notable examples including the Gretsch White Falcon and various Chet Atkins models. Some of these instruments have a distinctive "twangy" sound and were taken up by country music and early rock and roll artists such as Duane Eddy and Eddie Cochran. Similar models remain popular in rockabilly.

Gibson's last innovation in archtop design was the creation, in late 1950s, of "thinline" models with a reduced body depth, notably the Gibson ES-335 and Epiphone Casino.[4] These were more feedback resistant and easier to play standing up. They are classed as semi acoustic guitars, although not all semi-acoustic guitars have an arched top. Thinlines became popular with mainstream pop and rock artists during the 1960s. The 335 and similar guitars were taken up by, and remain steadfastly popular with electric blues players; B B King's various "Lucilles" are based on 335s.

The 1970s and 1980s were a low point of interest in archtops, with many rock and pop (and some jazz and blues) players switching to solid body guitars.

Interest in archtops was revived in the 1990s. Archtops had long been expensive instruments, with a level of finish and ornament to match. Boutique luthiers such as Roger Borys and Bob Benedetto brought the aesthetics of the instrument to even greater heights, making them attractive to collectors, and also continuing to innovate in technical design. The Benedetto style of acoustic/electric archtop has itself been copied by luthiers such as Dale Unger and Dana Bourgeois. Most of the accessories (pickguard, bridge, tuner buttons, knobs, etc.) are made of wood (ebony or rosewood) instead of metal and have a clean acoustic look. It is estimated there are nearly 100 archtop guitar luthiers in North America alone.[5] 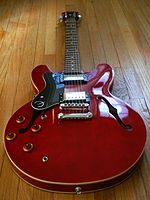 The Epiphone Dot, an inexpensive thinline archtop available since the 1990s

Contrastingly, mass-market archtop guitars became more affordable in the late 20th century, due to a combination of low labor costs in Asian countries and computer numerically controlled manufacture.[6] Most major guitar marques include at least a couple of archtops in their range, albeit not necessarily manufactured at their own facilities. Ibanez sell an extensive range of archtops under the Artcore marque. The Samick corporation sells archtops under its own name as well as manufacturing for other companies. Jay Turser and Eastwood are brands specialising in archtops[citation needed]. Gibson sells inexpensive Asian-made archtops under its Epiphone brand, such as the Epiphone Dot.[7]

Renewed interest in acoustic music has also led to the revival of purely acoustic archtops, such as the Gibson L-7C, The Loar Lh-600 and Godin 5th Avenue.

Recent technical innovations include Ken Parker's use of carbon fibre in high-end acoustic archtops, and the Godin Montreal hybrid guitar.

Archtops usually have 3-a-side pegheads and necks similar in width to a steel-string acoustic rather than an electric. High end models traditionally have "block" or "trapezoid" position markers.

The top or belly (and often the back) of the archtop guitar is either carved out of a block of solid wood, or heat-pressed using laminations, the latter being a less expensive construction method. The belly normally has two f-holes, the lower of these partly covered by a scratch plate raised above the belly so as not to damp its vibration. The arching of the top and the f-holes are similar to the violin family, on which they were originally based. The contours of the arching profile are usually derived in an ad hoc fashion.[8] The tops of Gibson's archtops were parallel braced. X-braced designs were introduced later, giving a tone closer to that of a flat-top guitar.[9] Sitka spruce, European spruce, and Engelmann spruce are most often used for the resonant tops of archtop guitars, although some guitar builders use Adirondack spruce (Red spruce), or Western red cedar. Archtop guitars often have Curly maple or Quilted maple backs. Full-sized archtops are among the largest guitars ever made, with the width of the lower bout in some cases approaching 19 inches (47 cm).

The original acoustic archtop guitars were designed to enhance volume; for that reason they were constructed for use with relatively heavy strings. Even after electrification became the norm, jazz guitarists have continued to fit strings of 0.012" gauge or heavier for reasons of tone, and also prefer flatwound strings. Thinline archtops generally use standard electric guitar strings.[10]

Many tremolo systems cannot be fitted to an archtop owing to the need to cut large holes in the belly to accommodate the mechanism, with the exception of the Bigsby vibrato tailpiece and the long tailpiece versions of the Gibson Vibrola. These vibrato systems mount on the surface of the guitar and need no body routing.

Various use of the term archtop

A continuum exists from these solid body, purely electric instruments to purely acoustic instruments similar to the original Orville Gibson design, including:

All of these types may be loosely described as archtop, but only the last possesses the characteristics most often associated with the type.

4 string (tenor), 7 string, 9 string and 12 string archtops have been manufactured.

The Mohan veena is a cross between an archtop and an Indian veena.

A relatively small number of ukulele makers offer instruments with flat tops but arched backs, generally of heat-pressed laminate construction with high-quality veneer; that design concentrates the uke body's internal resonance upward toward the sound hole, "like a parabolic mirror," according to the German seller RISA, whose Koki'o brand line of ukuleles all feature arched backs.