From Infogalactic: the planetary knowledge core
Jump to: navigation, search
This article is about the Ares V launch vehicle. For other uses, see Ares (disambiguation).

The Ares V (formerly known as the Cargo Launch Vehicle or CaLV) was the planned cargo launch component of the NASA Constellation program, which was to have replaced the Space Shuttle after its retirement in 2011. Ares V was also planned to carry supplies for a human presence on Mars.[3] Ares V and the smaller Ares I were named after Ares, the Greek god of war.

Initially, the Ares V would have launched the Earth Departure Stage and Altair lunar lander had NASA returned to the Moon, which was planned for 2019, but would also have served as the principal launcher for missions beyond the Earth-Moon system, including the program's ultimate goal, a manned mission to Mars after 2030.[4] The unmanned Ares V would complement the smaller, and human-rated Ares I rocket for the launching of the 4–6 person Orion spacecraft. Both rockets, deemed safer than the then-current Space Shuttle, would have utilized technologies developed for the Apollo program, the Shuttle, and the Delta IV EELV programs.[5] However, the Constellation program, including Ares V and Ares I was canceled in October 2010 by the passage of the NASA Authorization Act. In September 2011 NASA detailed the Space Launch System as its new vehicle for human exploration beyond Earth's orbit.[6]

In the 1996 book The Case for Mars, author Robert Zubrin discussed a possible future heavy launch vehicle named Ares. In the book, the rocket would have consisted of the Space Shuttle's External Tank powered by four Space Shuttle Main Engines and a second stage powered by an RL-10 engine. One notable difference in the Zubrin et al. design is that the SSMEs were on a small side-mounted flyback craft. This design was meant to allow the Ares to fly using existing Space Shuttle infrastructure.[7]

Ares V was to be the cargo launch component of the Constellation program. Unlike the Saturn V and Space Shuttle, where the crew and cargo were launched together on the same rocket, Project Constellation was planned to use two separate launch vehicles, the Ares I and the Ares V, for crew and cargo respectively. This configuration would have allowed the two launch vehicles to be optimized for their respective missions. Constellation therefore combined the Lunar Orbit Rendezvous used by Apollo with the Earth Orbit Rendezvous mode proposed by Dr. Wernher von Braun (along with the "Direct Ascent" proposal) during the early planning stage of Apollo. 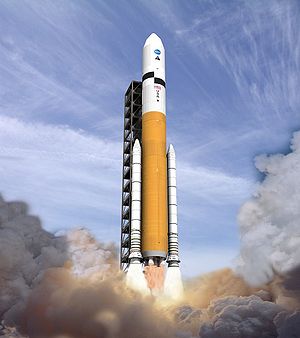 Artist's impression of the Ares V at liftoff

In 2007 NASA announced that Alliant Techsystems will be the contractor for the SRBs of both Ares I and Ares V.[9]

Although the Ares V was a medium to long term project, NASA planned to deploy its lift capability in a range of projects,[10] along the lines of the former Apollo Applications Program.

One proposal was to build an 8 to 16-meter Advanced Technology Large-Aperture Space Telescope[11] to be placed in the Sun/Earth L2 point. It would be a significant increase in dimension and performance over the Hubble Space Telescope and the Ares V vehicle was expected to carry this to its destination in a single launch.[citation needed] Future Ares V missions could also have served as a cost-effective, mass transport of construction materials for future spacecraft and missions, delivering raw materials for example to a Moon dock.[citation needed]

The Augustine Commission concluded that "Under the FY 2010 funding profile, the Committee estimates that Ares V will not be available until the late 2020s".[13] Even if NASA had been given the $3 billion increase and the ISS had been retired in 2015, the committee still believed that the Ares V would not be ready until the mid-2020s.[14]

On February 1, 2010, President Barack Obama announced a proposal to cancel the Constellation program effective with the U.S. 2011 fiscal year budget,[15] but later announced changes to the proposal in a major space policy speech at Kennedy Space Center on April 15, 2010. In October 2010, the NASA Authorization Act of 2010 was signed into law, which canceled Constellation.[16] But previous legislation kept Constellation contracts in force until a new funding bill was passed for 2011.[17][18] Due to previous legislative obligations, $500 million was to be paid to contractors after the program's cancellation until March 2011.[19]

The Ares V was intended as a heavy-launch vehicle to send large hardware and materials to the Moon, or to send supplies beyond Earth orbit to sustain human presence there.[2] The Ares V was designed to be a three-stage rocket: the first and second stages, which burn together, were to utilize both solid and liquid propulsion with the upper stage providing the necessary propulsion to send the hardware and staples beyond low-Earth orbit and onto a trajectory to the Moon.

Ares V underwent a preliminary design review after the results of the 2009 Augustine Commission.[20] Like the Space Shuttle, the Ares vehicle was to utilize a pair of solid-fuel first-stage rocket boosters that burn simultaneously with the liquid-fueled second (core) stage. The solid rocket booster on Ares V was first envisioned as an improved version of the current Space Shuttle Solid Rocket Booster, but with five or five and a half segments instead of the current four segments.[2][21][22] The liquid-fueled second stage was to be derived from the Space Shuttle External Tank and was to use either five or six RS-68B engines attached to the bottom of a new 10 m tank, or five SSMEs attached to the bottom of a stretched version of the Space Shuttle's 8.4 m tank. It was to be fueled by liquid oxygen (LOX) and liquid hydrogen (LH2).[23] 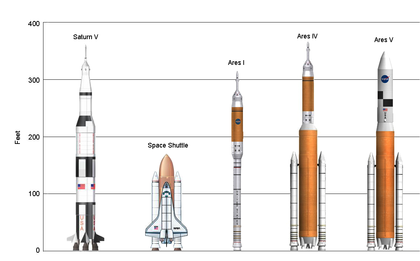 The upper stage, derived from the S-IVB upper stage used on the Saturn IB and Saturn V rockets, was named the Earth Departure Stage (EDS). The EDS would be powered by an Apollo-derived J-2X rocket engine, which was also to be used on the liquid-fueled upper stage of the Ares I booster. The EDS was to be used to steer the Altair lunar lander into its initial low-Earth "parking" orbit for later retrieval by the Orion spacecraft, and then would propel both the Altair and Orion to the Moon.[2] The EDS could also have been used to haul large payloads into low-Earth orbit, along with placing large unmanned spacecraft onto trajectories beyond the Earth-Moon system.

The Ares V was designed to have a payload capacity of over 414,000 lb (188 metric tons) to Low Earth orbit (LEO), and 157,000 lb (71 metric tons) to the Moon.[2] Upon completion the Ares V would be the most powerful rocket ever built, lifting more into orbit than even the American Saturn V, the failed Soviet N-1 for the canceled Soviet Moonshot, and the successful Soviet/Russian Energia booster developed for the Buran Shuttle.[24] Besides its lunar role,[2] it could also support a manned Orion expedition to a Near-Earth asteroid, and could boost an 8 to 16-meter successor of the Hubble Space Telescope to the Sun-Earth L2 point.

The Ares IV concept combines an Ares I upper stage with an Ares V first stage.[25] Specifically, the vehicle would consist of the liquid-fueled core stage from the Ares V design, two five-segment solid rocket boosters, and the liquid-fueled upper stage from the Ares I, as described by NASA in January 2007. The Ares IV would be a combined 367 ft (112 m) tall and could be used to reach the Moon. Total payload capacity would be 90,420 lb (41,000 kg) to 240 miles (390 km) for direct trans-lunar injection.[26]

NASA had considered using Ares IV to evaluate high-speed "skip" reentry profiles of the Orion capsule in 2007.[27] NASA had planned flight demonstrations of Ares I and Ares V hardware in "Heavy Lift" configurations from 2013. The "Heavy Lift" test flights were to test the first stage of the Ares V simultaneously with the Ares I upper stage attached on top to save both time and money. The later Heavy Lift test vehicle configurations are similar to the Ares IV vehicle.[28]

The manga/anime series Space Brothers depicts a fictional version of the Ares V that is identical in appearance.[32][verification needed]

In the 2013 film Star Trek Into Darkness, a desktop model of the Ares V rocket was set decoration in the office of Admiral Alexander Marcus as part of his spaceflight collection.[33]