Arezzo (Italian pronunciation: [äˈreʦːʦo]) is a city and comune in Italy, capital of the province of the same name, located in Tuscany. Arezzo is about 80 kilometres (50 miles) southeast of Florence, at an elevation of 296 metres (971 ft) above sea level. In 2013 the population was about 99,000.

Described by Livy as one of the Capitae Etruriae (Etruscan capitals), Arezzo (Aritim in Etruscan) is believed to have been one of the twelve most important Etruscan cities—the so-called Dodecapolis, part of the Etruscan League. Etruscan remains establish that the acropolis of San Cornelio, a small hill next to that of San Donatus, was occupied and fortified in the Etruscan period. There is other significant Etruscan evidence: parts of walls, an Etruscan necropolis on Poggio del Sole (still named "Hill of the Sun"), and most famously, the two bronzes, the "Chimera of Arezzo" (5th century BC) and the "Minerva" (4th century BC) which were discovered in the 16th century and taken to Florence. Increasing trade connections with Greece also brought some elite goods to the Etruscan nobles of Arezzo: the krater painted by Euphronios ca 510 BC with a battle against Amazons (in the Museo Civico, Arezzo 1465) is unsurpassed. 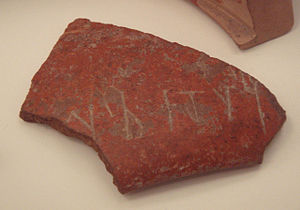 Roman pottery shred from Arezzo, Latium, found at Arikamedu in India (1st century AD), an evidence of the role of the city in Roman trade with India through Persia during the Augustan period. Musée Guimet.

Conquered by the Romans in 311 BC, Arretium became a military station on the via Cassia, the road to expansion by republican Rome into the basin of the Po. Arretium sided with Marius in the Roman Civil War, and the victorious Sulla planted a colony of his veterans in the half-demolished city, as Arretium Fidens ("Faithful Arretium"). The old Etruscan aristocracy was not extinguished: Gaius Cilnius Maecenas, whose name is eponymous with "patron of the arts", was of the noble Aretine Etruscan stock. The city continued to flourish as Arretium Vetus ("Old Arretium"), the third largest city in Italy in the Augustan period, well known in particular for its widely exported pottery manufactures, the characteristic moulded and glazed Arretine ware, bucchero-ware of dark clay and red-painted vases (the so-called "coral" vases).

Around 26-261 AD the town council of Arezzo dedicated an inscription to its patron L. Petronius Taurus Volusianus. See that article for discussion of the possible political/military significance of Volusianus's association with the city.

In the 3rd to 4th century, Arezzo became an episcopal seat: it is one of the few cities whose succession of bishops are known by name without interruption to the present day, in part because they were the feudal lords of the city in the Middle Ages. The Roman city was demolished, partly through the Gothic War and the invasion of the Lombards, partly dismantled, as elsewhere throughout Europe, and the stones reused for fortifications by the Aretines. Only the amphitheater remained.

The commune of Arezzo threw off the control of its bishop in 1098 and was an independent city-state until 1384. Generally Ghibelline in tendency, it opposed Guelph Florence. In 1252 the city founded its university, the Studium. After the rout of the Battle of Campaldino (1289), which saw the death of Bishop it, the fortunes of Ghibelline Arezzo started to ebb, apart from a brief period under the Tarlati family, chief among them Guido Tarlati, who became bishop in 1312 and maintained good relations with the Ghibelline party. The Tarlati sought support in an alliance with Forlì and its overlords, the Ordelaffi, but failed: Arezzo yielded to Florentine domination in 1384; its individual history was subsumed by that of Florence and the Medicean Grand Duchy of Tuscany. During this period Piero della Francesca worked in the church of San Francesco di Arezzo producing the splendid frescoes, recently restored, which are Arezzo's most famous works. Afterwards the city began an economical and cultural decay, which fortunately ensured that its medieval centre was preserved.

In the 18th century the neighbouring marshes of the Val di Chiana, south of Arezzo, were drained and the region became less malarial. At the end of the-century French troops led by Napoleon Bonaparte conquered Arezzo, but the city soon turned into a resistance base against the invaders with the "Viva Maria" movement, winning the city the role of provincial capital. In 1860 Arezzo became part of the Kingdom of Italy. City buildings suffered heavy damage during World War II; the Germans made a stand in front of Arezzo early in July 1944 and there was fierce fighting before the town was taken and liberated on 16 July by the British 6th Armoured Division. The Commonwealth War Graves cemetery is located to the North West of the city where 1,266 men are buried.[2]

Pope Benedict XVI visited Arezzo and two other Italian municipalities on Sunday, May 13, 2012.[3]

Arezzo is set on a steep hill rising from the floodplain of the River Arno. In the upper part of the town are the cathedral, the town hall and the Medici Fortress (Fortezza Medicea), from which the main streets branch off towards the lower part as far as the gates. The upper part of the town maintains its medieval appearance despite the addition of later structures. 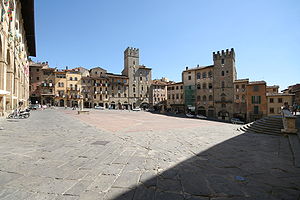 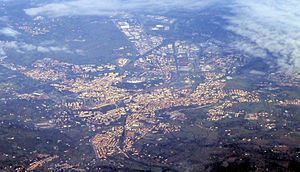 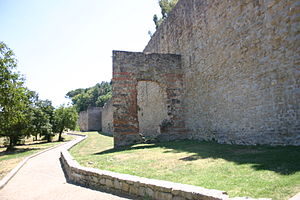 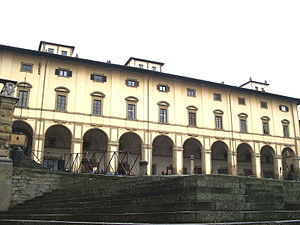 The Vasari Loggia on Piazza Grande. 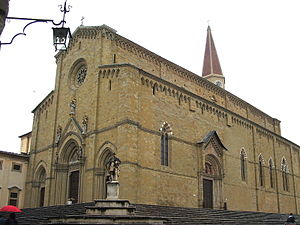 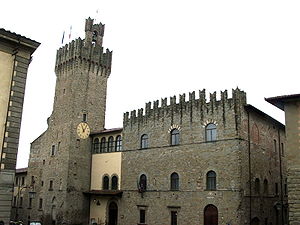 The Communal Palace in Arezzo. 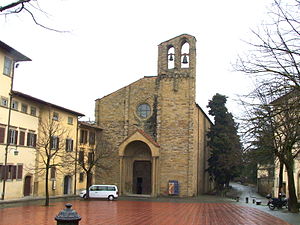 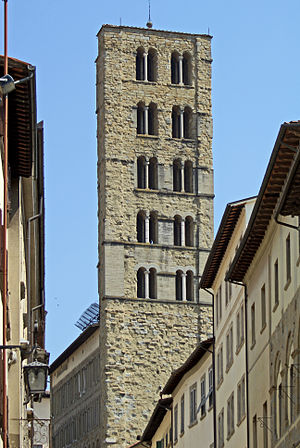 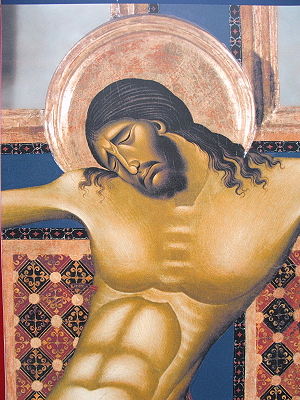 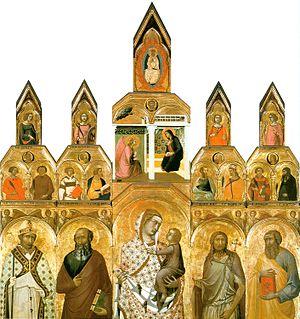 The Tarlati polyptych by Pietro Lorenzetti, 1320, at Santa Maria della Pieve, includes a depiction of Donatus of Arezzo (far left) 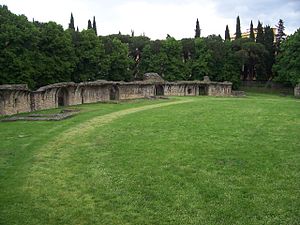 The Piazza Grande is the most noteworthy medieval square in the city, opening behind the 13th century Romanesque apse of Santa Maria della Pieve. Once the main marketplace of the city, it is currently the site of the Giostra del Saracino ("Joust of the Saracen"). It has a sloping pavement in red brick with limestone geometrical lines. Aside from the apse of the church, other landmarks of the square include:

University of Oklahoma campus in Arezzo

The former Monastery, built in the 18th Century, will be used as a permanent campus for the University, which currently has three other campuses in the State of Oklahoma located in: the main campus in Norman, the University of Oklahoma Health Sciences Center in Oklahoma City, and the OU-Schusterman Center in Tulsa. Zach Messite, PhD, Dean of the University’s College of International Studies, said that the Arezzo Campus programs are designed to provide students with a unique exposure to the local culture; “As a way to foster a relationship between the campus and the city, students will be required to take a class that gets them involved with the (local) community” [7]

Arezzo is twinned with: