Argentan is a commune and the seat of two cantons and of an arrondissement in the Orne department in northwestern France. 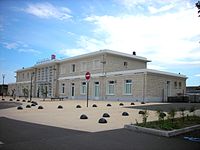 Argentan is situated near the Orne River. Although the region was heavily populated during the Gallo Roman period the town is not mentioned until 1025–1026. The toponyme comes from the Gaulois words, argentos (silver) and magos (market).[1] The town grew in importance during the Middle Ages.

Following the Viking invasion on the coast of northern France, the north-western part of Neustria became Normandy (literally: Northman country). The Viking chief, Rollo, left the town to one of his lieutenants. Throughout the Middle Ages, Argentan was either a rich place or totally burnt. English forces occupied the city several times. The Plantagenet had considered this town as one of the most important of Normandy.

During the reign of Louis XIV, Colbert set Alençon against Argentan in an economic competition on lace making. Thus, the point d'Argentan ("Argentan stitch") and the point d'Alençon ("Alençon stitch") were created. Argentan became a very important town for traditional industry. It also gained in religious importance with the building of a Benedictine Abbey and two churches, Saint-Martin and Saint-Germain. Several mansions (hôtels particuliers) were also built.

During World War I, the French 104th Infantry Regiment/14th Infantry Brigade was stationed at Argentan. It participated in the battle of Verdun in 1916.

During World War II, the city was almost totally destroyed. On 5 June 1944, on the eve of the Allied D-Day landing on the beaches of Normandy, the city suffered an important air raid in which the train station was destroyed.[2] The city suffered further damage when it was bombed on 6 and 7 June by B-17 and B-24 bombers of the U.S. Eighth Air Force.[3] The greatest part of the city was, however, left in ruins two and half months later, at the end of August, during the battle of the Argentan-Falaise Pocket. The U.S. Third Army, under the command of general George S. Patton liberated Argentan after eight days of violent combat against the German 9th Panzer Division and the 2nd SS Panzer Division Das Reich. The U.S. 80th Infantry Division liberated the city in the morning of 20 August. The city was burning.

Argentan was the birthplace of:

Argentan is twinned with: