From Infogalactic: the planetary knowledge core
Jump to: navigation, search
This article is about the automobile race. For the motorcycle race, see Argentine motorcycle Grand Prix.

The Argentine Grand Prix (Spanish: Gran Premio de Argentina) was a round of the Formula One championship, held intermittently from 1953 to 1998, all at the same autodrome in the Argentine national capital of Buenos Aires. Although it is no longer on the Formula One calendar, the race has a long and varied history. Argentine president Juan Perón was the driving force behind the creation of the circuit, after seeing the success of the country's own Juan Manuel Fangio.

The Buenos Aires Grand Prix was an event first started in 1930 as a sportscar event held at the Costanera circuit until 1940 and switched to the Retiro circuit for 1941. After a six-year break and by then Juan Peron in office, racing resumed in 1947 at Retiro with the start of the South American "Temporada" Grand Prix series, competing twice that year under the Formula Libre regulations. Italian Luigi Villoresi won all 1947 Temporada events. The race regularly attracted Brazilian and European drivers and also Argentine drivers competing in Europe, such as Juan Manuel Fangio and José Froilán González. For the 1948 Grand Prix season, the race was moved to the Palermo circuit where it would remain to host six of twelve "Peron Cup" races until the end of 1950. In 1951, the Costanera Norte circuit would host its last three Grand Prix events before completion of the Autodromo 17 de Octubre (October 17), a purpose-built circuit where the championship Formula One Argentine Grand Prix was held on different variants of the facility from 1953 to 1960, 1972 to 1981 and 1995 to 1998.

Built in 1952 on swampland just outside Buenos Aires, the "Autódromo", as it was known, featured a white archway dedicated to the memory of Admiral Guillermo Brown (William Brown). The circuit opened in March 1952 with the fifth edition of the "Perón Cup" (official name: VI Gran Premio Presidente Perón) on the No 4 configuration, which was won by Juan Manuel Fangio [1] and in 1953, hosted the first ever Formula One race held in South America.

The 1953 race saw native son Fangio retire his Maserati after 36 laps due to a transmission failure; Alberto Ascari's victory for Ferrari was overshadowed by an accident which killed nine people and injured many others due to overcrowding along the track. The race was heavily advertised and it is believed that around 400,000 people turned up for the event. The facility was so packed that people were standing on the edges of corners, inches away from the cars apexing the corners.[2]

The following year, the circuit was run in an anticlockwise direction, and Fangio did reach the top of the podium, winning his home Grand Prix on his second attempt; he would go on to win the next three Grands Prix in Argentina, one of which was the 1955 race. It was one of the hottest races on record, at 40C (104F) with track temperatures reaching 51C (122F). Fangio, now driving for Mercedes, was the only driver to complete the 96 laps, after 3 hours without handing his car over to another driver. One of his legs was badly burned by a chassis tube heated by the exhaust, an injury that forced a 3-month recovery. In 1958, Stirling Moss took the win, in what would be the penultimate race in Fangio's distinguished career. It was also the first Formula One championship victory for a rear/mid-engined car and the first for a privateer. Young New Zealander Bruce McLaren won in 1960. With Fangio's retirement and the disappearance of fellow Argentine driver José Froilán González, combined with unstable governments after the exile of Peron (in 1955), the Argentine Grand Prix disappeared from the F1 calendar in 1961 for over a decade.

A non-championship Formula One race was held at Buenos Aires in 1971, won by Chris Amon over two heats.[3][4][5] In 1972 the Argentine Grand Prix returned to the World Championship, with Carlos Reutemann emerging as the new home favorite. The variant used for these two years was similar to the one used before, except the straight leading into the hairpin after the Toboggan esses was shortened. Reutemann took pole position in his world championship debut, becoming only the second driver to achieve this feat. The race was won by world champion Jackie Stewart. 1973 saw Emerson Fittipaldi take victory at the last part of the race from Frenchman François Cevert.

For 1974, the circuit used the faster and longer No.15 circuit, which included two very fast and slightly banked corners that led into a section that went around a lake, which included a 3000 ft (1 km) long straight that led into an absolutely flat-out right handed 180 corner called the Curvon, and this led into a 4000 ft (1.4 km) straight which returned to the twisty arena that had always been used before. The cars were flat-out for 45 whole seconds throughout this whole lake loop. During the 1974 race, homeland hero Reutemann so very nearly took victory, but the Brabham mechanics apparently didn't put enough fuel in the Argentine's car and he ran out, and victory went to veteran New Zealander Denny Hulme. 1977 saw South African Jody Scheckter take victory, and 1978 saw Mario Andretti begin his domination of that season, driving for Lotus. 1979 was an exciting race, with the blue Ligiers of Frenchmen Jacques Laffite and Patrick Depailler lead much of the proceedings, but the wily Reutemann, now driving for Lotus, drove methodically through the field and pressed Laffite, but couldn't catch the flying Frenchman, and Reutemann finished 2nd. 1980 was full of drama; the drivers, led by Emerson Fittipaldi attempted to boycott the race due to the dreadful state of the track, and the new surface was breaking up in many spots because of the hot weather, and gravel was strewn all over the track from the cracks in the tarmac. The race went ahead anyway, and it was full of excitement, and Australian Alan Jones in a Williams, Brazilian Nelson Piquet in a Brabham, Canadian Gilles Villeneuve, Laffite and Reutemann all battled ferociously for top positions; Reutemann went out early with engine problems after he went off the circuit after attempting to pass Piquet and he got grass in his radiators; and all 4 mentioned drivers went at it ferociously. Because of the track breaking apart and being littered with gravel, Jones went off twice at the Ombu section and was passed by Laffite, Villeneuve and Piquet (who all went off at other parts of the track); and he went into the pits, got the grass out of his radiators and came out in 4th. He charged through the field and passed Villeneuve & Piquet; Laffite retired with engine problems; and the gritty Australian took victory followed by Piquet and Keke Rosberg scoring his first podium finish; and Frenchman Alain Prost scored one point in his very first F1 race,[6] driving for McLaren.[6] 1981 was a Brabham procession; designer Gordon Murray found a way to circumvent the new regulations with a hydropneumatic suspension which lowered the cars closer to the ground; and therefore were faster around corners than everyone else. Piquet took victory, Reutemann finished 2nd and Prost took 3rd. The 1982 round was supposed to be held in early March, but the political problems surrounding the South African Grand Prix caused the sponsors of the Argentine Grand Prix to back out of the race;[7] and the race was initially postponed 5 weeks before it was due to take place; and then the Argentine political situation was problematic and they also entered a brief war with the United Kingdom over the Falkland Islands, and within the context of an entirely European sport, this ensured the Argentine organizers' contract to be terminated.[8][9] An attempt to bring back the Argentine Grand Prix to the same circuit in Buenos Aires in 1986 didn't work out, and the race did not return for some years.[10]

A private consortium purchased the Buenos Aires track in 1991, renamed it and began to upgrade it. They got on the 1994 F1 season calendar, but the race (set for October) was aborted to continue modernization.[11] The general layout was not changed, but an "S" chicane named after the late Ayrton Senna was added. The No.6 arena circuit was used, which did not include the flat-out lake run. This tight, twisty variant wasn't well suited to Formula One cars and it was very difficult to pass on this variant because of the corners being so close together. The modernized Argentine Grand Prix returned in 1995, with victory going to Damon Hill. Hill would win the event again in 1996 (his championship season), and in 1997 Jacques Villeneuve won the race in 'his' championship season. Unfortunately, with the organizers of the event ran into financial difficulties, the 1998 race was the last running of the Argentine Grand Prix, the checkered flag waving victory to Michael Schumacher, in his ninth win for Ferrari.

A race was scheduled for 1999, but was cancelled pre-season, leaving a 5-week gap between the opening two rounds of the 1999 championship.

In February 2012, Argentine president Cristina Fernandez de Kirchner announced negotiations were coming to a close to bring the Grand Prix back to the country by 2013, this time at a street circuit to be created in the seaside resort city of Mar del Plata,[12] scotching stories which surfaced in December 2011 that suggested a new circuit, being constructed at Zárate, was to target F1.[13] Contracts were expected to be signed on May 2012, but this didn't happen. Bernie Ecclestone, commercial rights holder of Formula One, said "we are open to racing in Argentina when I can deal with serious people".[14]

Only one Argentine driver has won the Argentine Grand Prix. Juan Manuel Fangio won the race four times, although Carlos Reutemann came close on several occasions, particularly in 1974, 1979, and 1981. 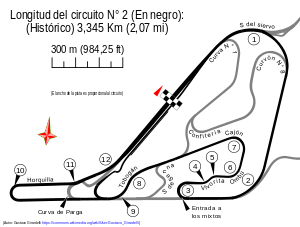