Argentine Revolution (Spanish: Revolución Argentina) was the name given by its leaders to a military coup d'état which overthrew the government of Argentina in June 1966 which begun a period of military dictatorship by a junta from then until 1973.

The Revolución Argentina and the "authoritarian-bureaucratic state"

The June 1966 coup established General Juan Carlos Onganía as de facto president, supported by several leaders of the General Confederation of Labour (CGT), including the general secretary Augusto Vandor. This was followed by a series of military-appointed presidents and the implementation of neo-liberal economic policies, supported by multinational companies, employers' federations, part of the more-or-less corrupt workers' movement, and the press.

While preceding military coups were aimed at establishing temporary, transitional juntas, the Revolución Argentina headed by Onganía aimed at establishing a new political and social order, opposed both to liberal democracy and to Communism, which would give the Armed Forces of Argentina a leading political and economic role. Political scientist Guillermo O'Donnell named this type of regime "authoritarian-bureaucratic state",[1] in reference to the Revolución Argentina, the 1964–1985 Brazilian military regime, Augusto Pinochet's regime (starting in 1973).

Onganía implemented corporatist policies, experimenting in particular in Córdoba under the governance of Carlos Caballero. The new Minister of Economy, Adalbert Krieger Vasena, decreed a wage freeze and a 40% devaluation, which strongly affected the state of the Argentinian economy – in particular the agricultural sector – and favored foreign capital. Vasena suspended collective labour conventions, reformed the "hydrocarbons law" which had established a partial monopoly of the Yacimientos Petrolíferos Fiscales (YPF) state firm, and passed a law facilitating the eviction of tenants over their non-payment of domestic rent. Finally, the right to strike was suspended (Law 16,936) and several other laws passed reversing previous progressive labor legislation (reducing retirement age, etc.).

The workers' movement divided itself between Vandoristas, who supported a "Peronism without Perón" line (Augusto Vandor, leader of the General Confederation of Labour, declared that "to save Perón, one has to be against Perón") and advocated negotiation with the junta, alongside "Participationists" headed by José Alonso, and Peronists, who formed the General Confederation of Labour of the Argentines (CGTA) in 1968 and were opposed to any kind of participation with the military junta. Perón himself, from his exile in Francoist Spain, maintained a cautious and ambiguous line of opposition to the regime, rejecting both endorsement and open confrontation. 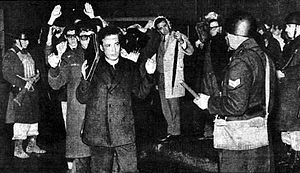 The Night of the Long Batons, an Onganía police action against University of Buenos Aires students and faculty came to be known.

Onganía ended university autonomy, which had been achieved by the University Reform of 1918.[2]

He was responsible for the July 1966 La Noche de los Bastones Largos ("The Night of the Long Truncheons"), where university autonomy was violated, in which he ordered police to invade the Faculty of Sciences of the University of Buenos Aires. They beat up and arrested students and professors. The university repression led to the exile of 301 university professors, among whom were Manuel Sadosky, Tulio Halperín Donghi, Sergio Bagú and Risieri Frondizi.[3]

Onganía also ordered repression on all forms of "immoralism", proscribing miniskirts, long hair for young men, and all avant-garde artistic movements.[2] This moral campaign alienated the middle classes, who were massively present in universities.[2]

Change of direction of the Armed Forces

Towards the end of May 1968, General Julio Alsogaray dissented from Onganía, and rumors spread about a possible coup d'état, with Algosaray leading the opposition to Onganía. At the end of the month Onganía dismissed the leaders of the Armed Forces: Alejandro Lanusse replaced Julio Alsogaray, Pedro Gnavi replaced Benigno Varela, and Jorge Martínez Zuviría replaced Adolfo Alvarez.

On 19 September 1968, two important events affected Revolutionary Peronism. John William Cooke, former personal delegate of Perón, an ideologist of the Peronist Left and friend of Fidel Castro, died from natural causes. On the same day a group of 13 men and one woman who aimed at establishing a foco in Tucumán Province, in order to head the resistance against the junta, was captured;[4] among them was Envar El Kadre, then a leader of the Peronist Youth.[4] 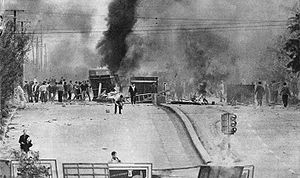 Images of the Cordobazo, May–June 1969

In 1969, the CGT de los Argentinos (led by Raimundo Ongaro) headed protest movements, in particular the Cordobazo, as well as other movements in Tucumán, Santa Fe and Rosario (Rosariazo). While Perón managed a reconciliation with Augusto Vandor, he followed, in particular through the voice of his delegate Jorge Paladino, a cautious line of opposition to the military junta, criticizing with moderation the neoliberal policies of the junta but waiting for discontent inside the government ("hay que desensillar hasta que aclare", said Perón, advocating patience). Thus, Onganía had an interview with 46 CGT delegates, among them Vandor, who agreed on "participationism" with the military junta, thus uniting themselves with the Nueva Corriente de Opinión headed by José Alonso and Rogelio Coria.

In December 1969, more than 20 priests, members of the Movement of Priests for the Third World (MSTM), marched on the Casa Rosada to present to Onganía a petition pleading him to abandon the eradication plan of villas miserias (shanty towns).[5]

The same year, the MSTM issued a declaration supporting Socialist revolutionary movements, which lead the Catholic hierarchy, by the voice of Juan Carlos Aramburu, coadjutor archbishop of Buenos Aires, to proscribe priests from making political or social declarations.[6]

Various armed actions, headed by the Fuerzas Armadas de Liberación (FAL), composed by former members of the Revolutionary Communist Party, occurred in April 1969, leading to several arrests among FAL members. These were the first left-wing urban guerrilla actions in Argentina. Beside these isolated actions, the Cordobazo uprising of 1969, called forth by the CGT de los Argentinos, and its Cordobese leader, Agustín Tosco, prompted demonstrations in the entire country. The same year, the People's Revolutionary Army (ERP) was formed as the military branch of the Trotskyist Workers' Revolutionary Party, leading an armed struggle against the dictatorship.

Faced with increasing opposition, in particular following the Cordobazo, General Onganía was forced to resign by the military junta, composed of the chiefs of the Army, the Navy and the Air Force. He was replaced by General Roberto Marcelo Levingston, who, far from calling free elections, decided to deepen the Revolución Argentina. Levingston expressed the nationalist-developmentist sector of the Armed Forces, and was supported by the most intransigent military elements. He named the radical economist Aldo Ferrer as Minister of Economy.

A coalition of political parties issued the statement known as La Hora del Pueblo, calling for free and democratic elections which would include the Justicialist Party. Under this pressure, Levingston was ousted by an internal coup headed by the Chief of Staff of the Armed Forces and strongman of the Revolución Argentina, General Alejandro Agustín Lanusse.

The last of the military presidents de facto of this period, Alejandro Lanusse, was appointed in March 1971. He was as unpopular as his predecessors. His administration started building infrastructure projects (roads, bridges, etc.) necessary for the development of the country, without responding to popular demands concerning social and economic policies.

General Lanusse tried to respond to the Hora del Pueblo declaration by calling elections but excluding Peronists from them, in the so-called Gran Acuerdo Nacional (Great National Agreement). He nominated Arturo Mor Roig (Radical Civic Union) as Minister of Interior, who enjoyed the support of the Hora del pueblo coalition of parties, to supervise the coming elections.

There had been no elections since 1966, and armed struggle groups came into existence, such as the Ejército Revolucionario del Pueblo (ERP, the armed wing of the Workers' Revolutionary Party, PRT), the Catholic nationalist Peronists Montoneros, or the Fuerzas Armadas Revolucionarias (FAR).

In August 1972, an attempt by several revolutionary members to escape from prison, headed by Mario Roberto Santucho (PRT), was followed by what became known as the Trelew massacre. Fernando Vaca Narvaja, Roberto Quieto, Enrique Gorriarán Merlo and Domingo Menna managed to complete their escape, but 19 others were re-captured. 16 of them, members of the Montoneros, the FAR, and the ERP, were killed, and 3 managed to survive. On the same night of August 22, 1972, the junta approved law 19,797, which proscribed any information concerning guerrilla organizations. The massacre led to demonstrations in various cities.

Finally, Lanusse lifted the proscription of the Justicialist Party, although he maintained it concerning Juan Perón by increasing the number of years of residency required of presidential candidates, thus excluding de facto Perón from the elections since he had been in exile since the 1955 Revolución Libertadora.