Hearst Television, Inc. (formerly Hearst-Argyle Television) is a broadcasting company in the United States, owned by the New York City-based Hearst Corporation. It holds joint ventures in television production with NBCUniversal Television Distribution (although most of the stations it owns are affiliated with ABC). From 1998 to mid-2009, the company traded its common stock on the New York Stock Exchange under the symbol "HTV."

Hearst-Argyle was formed in 1997 with the merger of Hearst Corporation's broadcasting division and stations owned by Argyle Television Holdings II,[1] which is partially related to the company of the same name who (in 1994) sold its stations to New World Communications, stations that eventually became Fox-owned stations. Hearst's involvement in broadcasting dates to the 1920s.

In terms of audience reach, Hearst is the largest group owner of ABC-affiliated stations, and the second-largest group owner of NBC affiliates.[citation needed] Hearst-owned ABC affiliates in National Football League markets simulcast Monday Night Football games from ESPN that involve these teams - ESPN is 20% owned by Hearst, the rest being owned by ABC's parent, The Walt Disney Company. Other Hearst-owned stations also carry ESPN-aired NFL games, even though they are affiliated with other networks (like WBAL-TV, Baltimore's NBC affiliate).

In February 2009 Hearst-Argyle announced that its stations (except for KITV and its satellites in Hawaii, which had already completed their transition to digital, and WPTZ in Plattsburgh, New York and WNNE in Hartford, Vermont, which followed the other Champlain Valley in transitioning on February 17, 2009) would comply with the new DTV transition date of June 12, 2009.

Hearst also owns two radio stations in Baltimore, the last remaining from the company divesting most of their radio assets after the Telecommunications Act of 1996 went into effect. 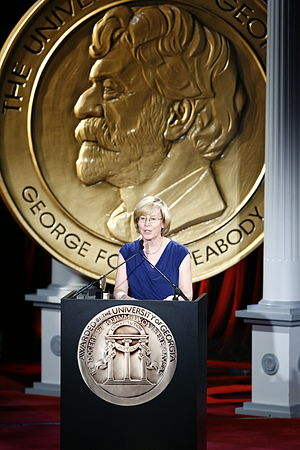 All Hearst-owned stations uses "Project Economy" during most business segments. In addition, all Hearst-owned stations also use the "Commitment" banner for all political news coverage leading up to the local, national, and statewide elections in lieu of a localized version of the network's political segment. Hearst also maintains a Washington, D.C. bureau for their stations customized to each of their brandings, with Sally Kidd as the on-air reporter for the bureau. "Operation High School" is Hearst's branding in most markets for coverage of local high school sports.

Until 2009, three of Hearst's television stations (KCWE, WMOR-TV, and WPBF) and its two radio stations (WBAL radio and WIYY) were owned by Hearst Broadcasting, Inc., an indirect wholly owned subsidiary of the Hearst Corporation through which Hearst ultimately controlled Hearst-Argyle Television, as opposed to Hearst-Argyle itself; Hearst-Argyle still operated these stations under a management services agreement. These stations were transferred to Hearst Television shortly after its privatization.[3][4]

On August 20, 2014, it was announced that Hearst Television would acquire WVTM in Birmingham, Alabama and WJCL in Savannah, Georgia from Media General, who must divest the stations to proceed with their acquisition of LIN Media.[5][6]

Stations are listed alphabetically by state and city of license.

In addition to the above, Hearst-Argyle never owned WZZM or WGRZ. Those two stations were divested by one of the company's predecessors, Argyle Television Holdings II, several months prior to the merger with Hearst Broadcasting. The "years owned" information reflects the years of ownership by Argyle Television Holdings II. And WDTN was the only formerly owned television station that was owned directly by Hearst prior to the merger.