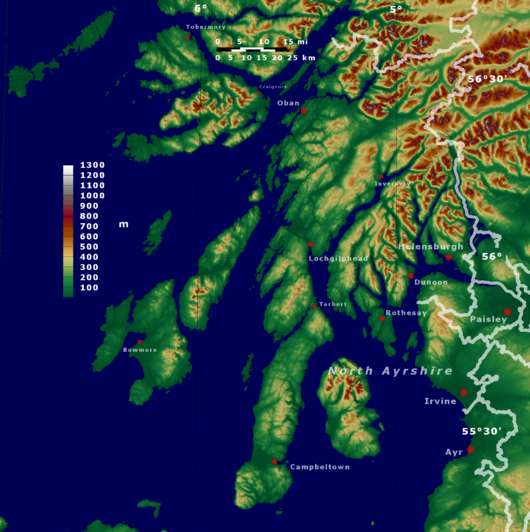 Topographic map of Argyll and Bute

Argyll and Bute (Scottish Gaelic: Earra-Ghaidheal agus Bòd pronounced [ɛrˠəˈɣɛːəlˠ̪ akəs̪ pɔːtʲ]) is both one of 32 unitary authority council areas; and a Lieutenancy area in Scotland. The administrative centre for the council area is located in Lochgilphead.

Argyll and Bute covers the second largest administrative area of any Scottish council.

The council area adjoins those of Highland, Perth and Kinross, Stirling and West Dunbartonshire. Its border runs through Loch Lomond.

The present council area was created in 1996, when it was carved out of the Strathclyde region, which was a two-tier local government region of 19 districts, created in 1975. Argyll and Bute merged the existing Argyll and Bute district and one ward of the Dumbarton district. The Dumbarton ward, called 'Helensburgh and Lomond', included the burgh of Helensburgh and consisted of an area to the west of Loch Lomond, north of the Firth of Clyde and mostly east of Loch Long.

The later scenes of the 1963 James Bond film From Russia with Love were filmed around the lochs and hills of Argyll and Bute.[1]

The main ferry operator in Argyll & Bute is Caledonian MacBrayne, including services from the mainland to Bute, Gigha, Islay, Mull, Coll and Tiree.

ASP Ship Management Ltd has a UK office based in Newcastle that operates/technically manages the Jura Ferry plus they technically manage ferries on the following routes all on behalf of Argyll and Bute Council:

In February 2012, the council was criticised for allegedly setting up "Spy" accounts on social media. As a result of the investigation, a council employee was suspended for setting up "fake social media accounts to monitor what was being said about the council".[2] The council's own investigation later confirmed it had "found no evidence of any form of spying or covert surveillance having been carried out by any employee within the council's communication team."[3]

In June 2012, the council was heavily criticised[4] for banning a local primary student, Martha Payne (aged 9), from taking photographs of her school dinners for her online blog. The blog, NeverSeconds, had been praised by the celebrity chef, Jamie Oliver,[5] had attracted over two million visits, and at the time of the ban had raised nearly £2,000[6] for a food charity.[7] On the day the story broke, the blog had raised over £40,000.[8] After an initial statement from the council defending the decision,[9] the ban was subsequently overturned by council leader, Roddy McCuish.[10] In November 2012 a book written by David Payne, father of Neverseconds blogger Martha Payne, revealed the background to the council's attempt to censor and bully a 9 year old girl. The book states about the council: "My anger and frustration at Argyll and Bute Council was not being soothed by time. Thinly veiled attacks on our parenting on national radio and an abusive phonecall stood out as examples of a public body sick to the very top. Complaints via the proper procedures and through elected councillors had brought no visible changes. Far from being contrite they seemed to take a pride in being untouchable."[11]