From Infogalactic: the planetary knowledge core
Jump to: navigation, search
This article is about a historical term. For other uses, see Ariana (disambiguation).

Ariana, the Latinized form of the Ancient Greek Ἀρ(ε)ιανή Ar(e)ianē[1] (inhabitants: Ariani; Ἀρ(ε)ιανοί Ar(e)ianoi),[2] was a general geographical term used by some Greek and Roman authors of the ancient period for a district of wide extent between Central Asia[3] and the Indus River,[4] comprehending the eastern provinces of the Achaemenid Empire[5] that covered the whole country of modern day Afghanistan, and a few parts of India, Pakistan, Tajikistan, Iran, Turkmenistan, and Uzbekistan.[6][7]

The Greek term Arianē (Latin: Ariana) is based upon an Iranian word found in Avestan Airiiana- (especially in Airyanem Vaejah, the name of the Iranian peoples' mother country).[4] The modern name Iran represents a different form of the ancient name Ariana which derived from Airyanem Vaejah and implies that Iran is “the” Ariana itself – a word of Old Iranian origin[8] – a view supported by the traditions of the country preserved in the Muslim writers of the ninth and tenth centuries.[9] The Greeks also referred to Haroyum/Haraiva (Herat) as 'Aria', which is one of the many provinces found in Ariana.[10][11][12]

The names Ariana and Aria, and many other ancient titles of which Aria is a component element, are connected with the Sanskrit term Arya-, the Avestan term Airya-, and the Old Persian term Ariya-, a self designation of the peoples of Ancient India and Ancient Iran,[13] meaning "noble", "excellent" and "honourable".[3]

The exact limits of Ariana are laid down with little accuracy in classical sources. It seems to have been often confused (as in Pliny, Naturalis Historia, book vi, chapter 23) with the small province of Aria.[3] 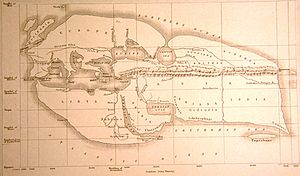 The name Ariana can be seen in this 19th-century reconstruction of world map by Eratosthenes, c.194 BC.

Per Eratosthenes' definition, the borders of Ariana were defined by the Indus River in the east, the sea in the south, a line from Carmania to the Caspian Gates in the west, and the so-called Taurus Mountains in the north. This large region included almost all of the countries east of Media and ancient Persia, including south of the great mountain ranges up to the deserts of Gedrosia and Carmania,[15] i.e. the provinces of Carmania, Gedrosia, Drangiana, Arachosia, Aria, the Paropamisadae; also Bactria was reckoned to Ariana and was called "the ornament of Ariana as a whole" by Apollodorus of Artemita.[16]

After having described the boundaries of Ariana, Strabo writes that the name Αρειανή could also be extended to part of the Persians and the Medes and also to the northwards Bactrians and the Sogdians.[17] A detailed description of that region is to be found in Strabo's Geographica, Book XV – "Persia, Ariana, the Indian subcontinent", chapter 2, sections 1–9.

By Herodotus Ariana is not mentioned, nor is it included in the geographical description of Stephanus of Byzantium and Ptolemy, or in the narrative of Arrian.[3]

Having considered these various sources, Ariana includes modern-day Afghanistan (Bactria, Arachosia, Aria, Drangiana and the Paropamisadae), east and southeast Iran (Carmania and Gedrosia), most of Tajikistan (Sogdiana), most of Turkmenistan (Margiana), south Uzbekistan (parts of Sogdiana) and extending to the Indus River in Pakistan.[6]

The tribes by whom Ariana was inhabited, as enumerated by Strabo were:[18]

Pliny (vi. 23) says that some add to India four satrapies to the west of the river, – the Gedrosii, Arachosii, Arii, and Paropamisadae, as far as the river Cophes (the river Kabul). Pliny therefore agrees on the whole with Strabo. Dionysius Periegetes (1097) agrees with Strabo in extending the northern boundary of the Ariani to the Paropamisus, and (714) speaks of them as inhabiting the shores of the Erythraean Sea. It is probable, from Strabo (xv. p.724), that the term was extended to include the east Persians, Bactrians, and Sogdians, with the people of Ariana below the mountains, because they were for the most part of one speech.[3]

Rüdiger Schmitt, the German scholar of Iranian Studies, also believes that Ariana should have included other Iranian people. He writes in the Encyclopædia Iranica:

Eratosthenes’ use of this term (followed by Diodorus 2.37.6) is obviously due to a mistake, since, firstly, not all inhabitants of these lands belonged to the same tribe and, secondly, the term "Aryan" originally was an ethnical one and only later a political one as the name of the Iranian empire (for all North Indians and Iranians designated themselves as "Aryan"; See Aryan), thus comprising still other Iranian tribes outside of Ariana proper, like Medes, Persians or Sogdians (so possibly in Diodorus 1.94.2, where Zarathushtra is said to have preached Ahura Mazdā's laws "among the Arianoi").[4]