Before the start of the war the land of the current states of New Mexico and Arizona was part of the New Mexico Territory and the Gadsden Purchase which ran parallel to William Walker's Republics of Lower California and Sonora. As early as 1856 concerns had been raised about the ability of the territorial government in Santa Fe to effectively govern the southern part of the territory which was separated by the Jornada del Muerto, a difficult stretch of desert.

In February 1858, the New Mexico territorial legislature adopted a resolution in favor of the creation of the Arizona territory, but with a north-south border along the 32nd meridian west from Washington with the additional stipulation that all the Indians of New Mexico would be removed to northern Arizona.

In April 1860, impatient for Congress to act, a convention was called and 31 delegates met in Tucson. In July 1860, the convention drafted a constitution for a "Territory of Arizona" to be organized out of the New Mexico Territory south of 34° N. The convention elected Lewis Owings as the Territorial Governor, and elected a delegate to Congress.

The proposal, however, did not succeed in Congress because of opposition from anti-slavery Congressmen. Many people in the area were pro-slavery, with business connections in southern states, and this new territory lay below the old Missouri Compromise line of demarcation between slave and free states. Thus anti-slavery Congressmen feared that the new territory might eventually become a slave state.

Since the proceedings of the Tucson convention never were ratified by the United States Congress, the Provisional Territory never became a legal entity. However, for a time it did operate as a de facto, if not de jure, government for the intended Arizona Territory. Dr. Lewis Owings, Governor of the Provisional Territory, appointed James Henry Tevis to raise the first Territorial Militia, which comprised three companies of Arizona Rangers, for the protection of the Territory from marauding Apaches and bandits.[1] Two companies were raised in the Pinos Altos mining camp, and another at Mesilla.

After the start of the American Civil War support for the Confederacy was strong in the southern part of the New Mexico Territory largely due to its neglect by the United States government. Other concerns were the lack of substantial numbers of troops to fight the Apaches who were defending against encroaching white settlement, fighting off ranchers and mining camps all over Traditional Arizona following the Bascom Affair. Another was the closing of the Butterfield Overland Mail stations which connected the Arizona frontier colonies to the East and California. The Arizonans felt abandoned which fueled dissatisfaction for the federal government.

In March 1861, the citizens of Mesilla called a secession convention to separate themselves from the United States and join the Confederacy.

On March 16 the convention adopted a secession ordinance citing the region's common interests and geography with the Confederacy, the need of frontier protection and the loss of postal service routes under the United States government as reasons for their separation.[2] The ordinance proposed the question of secession to the western portions of the territory and on March 28 a second convention in present-day Tucson, Arizona also met and ratified the ordinance.

The conventions subsequently established a provisional territorial government for the Confederate "Territory of Arizona." Owings was again elected as provisional governor and Granville Henderson Oury was chosen as a delegate to petition for the territory's admission into the Confederacy. 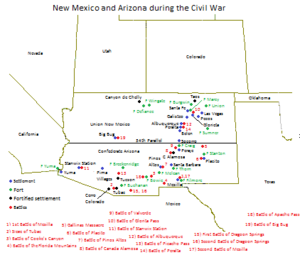 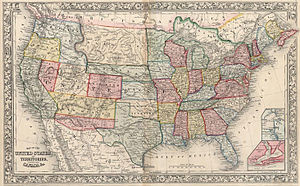 1861 map of the USA showing the Confederate Arizona Territory

Raising the Confederate flag in Tucson.

The Confederate Arizona Territory was thought to be important to the role of the New Mexico Territory in the American Civil War primarily because it offered Confederate access to California. Consequently, it was the scene of several important battles in the war's Trans-Mississippi Theater.

In July 1861 a force under Lieutenant Colonel John Baylor arrived in El Paso, Texas across the border from Mesilla. With support from the secessionist residents of Mesilla Baylor's 2nd Texas Mounted Rifles entered the territory and took a position in the town on July 25. Union forces under Major Isaac Lynde at nearby Fort Fillmore prepared to attack Baylor. On July 25 the two armies met outside of town at the First Battle of Mesilla in a brief engagement in which the Union troops were defeated.

Major Lynde then abandoned Fort Fillmore and began a march north to join the troops at Fort Craig under Colonel Edward R. S. Canby. However, his retreat came to a halt in severe heat and was overtaken by Baylor. Lynde surrendered his command without a shot fired at San Augustine Springs, in the Organ Mountains.[3]

On August 1, 1861, the victorious Baylor proclaimed the existence of a Confederate Arizona Territory, which comprised the area defined in the Tucson convention the previous year. He appointed himself as permanent governor. Among his cabinet members was the Mesilla attorney Marcus H. MacWillie, who served as the territorial attorney general.

The next month, Baylor's men and a Union force would fight a small engagement at the village of Canada Alamosa, ending with another Confederate victory.

The proposal to organize the Confederate Territory of Arizona was passed by the Confederate Congress in early 1862 and proclaimed by President Jefferson Davis on February 14, 1862. To commemorate this event in another era, February 14, 1912, the fiftieth anniversary was selected as official date of statehood for Arizona.

Efforts by the Confederacy to secure control of the region led to the New Mexico Campaign. Baylor sent Company A, Arizona Rangers to Tucson to protect the population from the Apache and delay the advance of Union troops from Fort Yuma.

In 1862 Baylor was ousted as governor of the territory by President Davis, and the Confederate loss at the Battle of Glorieta Pass forced Confederate retreat from the territory. On March 30, Union forces fought a smaller engagement against a detachment of Company A, Arizona Rangers, a Confederate force destroying supply depots along the California Column route of advance on the Gila River, 80 miles east of its base at Fort Yuma. This skirmish known as the Battle of Stanwix Station, was the westernmost engagement of regular forces in the Civil War, and successfully delayed the advance of the California forces.

By July 1862, Union forces were approaching the territorial capital of Mesilla from the north and the west and the Confederates retreated south to El Paso.

The territorial government relocated to El Paso, then with Confederate military units retreated to San Antonio abandoning West Texas. California Column troops controlled all of Confederate Arizona, El Paso and Fort Quitman in West Texas. The government in exile remained in Texas for the duration of the war, although MacWillie continued to represent the territory in the First and Second Confederate Congresses. Minor resistance in Arizona continued at the partisan level, and Confederate units under the banner of Arizona fought until the end of the war in May 1865.

In 1862 the California Column volunteers who fought at Stanwix Station and Picacho Pass fought at the Battle of Apache Pass against 500 Apaches. The battle is considered part of the American Civil War.