The Armada of 1779 was a large joint French and Spanish fleet intended to invade the Kingdom of Great Britain. The initial Franco-Spanish plan was to seize the Isle of Wight, and then capture the British naval base of Portsmouth. Ultimately no fleet actions were fought in the Channel and the French and Spanish invasion never materialised. The threat to Great Britain drew comparisons with the Spanish Armada of 1588.[4]

In 1778, the British Royal Navy failed to secure a victory against the French Marine Royale at the Battle of Ushant, leading French naval figures to believe that they could have won if their force had been larger. On 12 April 1779, France, which had directly allied itself with the Americans in February 1778, signed a secret treaty with Spain, bringing it into the war against Great Britain. Fearful of the consequences in their own American empire, the Spanish did not openly support the Americans rebelling against British rule, but were willing to undertake direct operations against British interests. Spain instead sought to regain various territories, most notably the fortress of Gibraltar, which gives its holder considerable power over the entrance to the Mediterranean Sea. On 3 June 1779 the French fleet at Brest unexpectedly[by whom?] left port and sailed southward, then on 16 June Spain declared war on Great Britain. 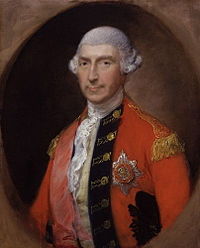 Jeffrey Amherst was in command of the British land forces who prepared to resist the invasion.

The plan was for the French fleet, commanded by Admiral d'Orvilliers (who had also led at Ushant), including 30 ships of the line and numerous smaller vessels, to meet a Spanish fleet off the Sisarga Islands, near Corunna in north-west Spain. When the French reached the rendezvous point, the Spanish fleet was not there, because (the Spanish later claimed) the winds were unsuitable, so d'Orvilliers had to wait for them. The ships from Brest had deliberately departed before they were fully supplied, to avoid the possibility of being blockaded by the British. Serious problems consequently arose as the wait dragged out to several weeks, and no arrangements were made to take on additional supplies in Spain. Scurvy weakened the crews, and in the hot, crowded shipboard conditions, typhus and smallpox also broke out.[5] The Spanish fleet, commanded by Don Luis de Córdova (who was to be subordinate to d'Orvilliers in the joint enterprise), including 36 ships of the line, finally arrived on 22 July.

An army of over 40,000 men was slowly being gathered around Le Havre and St. Malo in northern France, with 400 transport boats. The purpose of the combined fleet was to put the Royal Navy out of action, so that the army could be safely transported across the English Channel (La Manche), whereupon it would set up a base on the Isle of Wight or the nearby British coast. At the time there were fewer than 40 Royal Navy ships of the line available in the English Channel area, newly under the command of ailing 64-year-old Sir Charles Hardy, who had been desk-bound for 20 years. On 25 July the Franco-Spanish armada set sail northwards to take on the British fleet, with contrary winds greatly slowing its progress. As time passed, it also became apparent that the diseases which had afflicted the French (and killed d'Orvilliers' only son, a lieutenant in the fleet) were spreading to the Spanish. Having missed opportunities to seize two important British convoys of merchant ships from the West Indies (something they did not learn until later), which reached Plymouth on 31 July, the fleet finally passed Ushant on 11 August and entered the Channel. Three days later, a squadron under American colours (though consisting mostly of French ships with French crews) set sail from the French port of L'Orient, heading northward towards Ireland as a diversion. This diversionary fleet was commanded by John Paul Jones, a captain with an alarming reputation in Britain.[6]

Action against the Royal Navy

What d'Orvilliers did not know was that the British fleet was not in the Channel. Having learned that the French fleet had gone out into the Atlantic in June, Admiral Hardy was patrolling off the Scilly Isles. On 14 August, the massive combined fleet came within sight of the English coast, causing a wave of alarm which quickly spread through the country. The alarm did not spread quickly enough to reach the Royal Navy ship Ardent, which left Plymouth on 15 August to join Hardy on patrol. On 16 August the French and Spanish ships, then sailing slowly eastwards up the Channel, received orders from France to turn around, as it had been decided by the government that the best place for the troops to land would be near Falmouth in Cornwall. D'Orvilliers considered this a very bad idea, and sent a reply asking the government to reconsider. The next day Ardent met an outlying French squadron of the great fleet, but was fooled into thinking it was British, and was swiftly captured.

The allies hovered off Plymouth, waiting for a reply to d'Orvilliers' message. On 18 August a gale from the east drove them far to the west and out into the Atlantic. This had one beneficial result: as they struggled eastward again, on 25 August the allies finally learned the location of Hardy's fleet. They decided to neutralise it quickly, because they were finding it increasingly difficult to cope with sickness and lack of food. The allies steered for the Scilly Isles with the intention of forcing a battle, but Hardy decided to try to avoid battle. On 31 August, under cover of fog, his fleet slipped past Land's End and he began leading his would-be opponents as far as he could towards the key British naval base of Portsmouth. Remarkably, on 3 September, the British fleet, completely undamaged, reached the well-defended safety of the Solent, and set about equipping for battle. This was a problem for the allies, who were losing men daily to sickness. French military planners also realised that if the invasion was postponed much longer, troops would be fighting through the British autumn and winter. That day, the leaders of the great armada abandoned their campaign and set sail for Brest.

The attempted invasion was worrying to the British, particularly as John Paul Jones's squadron began threatening ports on the east coast shortly after its arrival. Hasty improvements were made to coastal defences – the first earthworks were erected on the Western Heights at Dover (though their main phase dates to the planned invasion by Napoleon soon afterwards[7]) and at Portsmouth Fort Gillkicker was built.[8] For the Spanish, the expedition was an expensive waste of time. It prevented them from bringing their full force to bear on Gibraltar, which had strengthened its defences after weak early attacks, and would successfully hold out until the end of the war. For the French, the expedition was a disaster. Keeping so many ships at sea, and so many troops waiting at embarkation ports for months on end was hugely expensive—and many good sailors died of disease.[9] D'Orvilliers resigned his post soon after returning to France. The French and Spanish fleets continued joint operations, but more usually as a precaution for troop landings against isolated British garrisons than as a direct challenge to the Royal Navy (notable exceptions being the unsuccessful commitment to the Great Siege of Gibraltar, and another abortive pursuit of the Channel Fleet in August 1781, which was not connected with an invasion plan).