From Infogalactic: the planetary knowledge core
Jump to: navigation, search
For other uses, see Armagh (disambiguation).

Armagh (/ɑːrˈmɑː/ ar-MAH; from Irish Ard Mhacha, meaning "Macha's height" [aɾˠd̪ˠ ˈwaxə]) is the county town of County Armagh in Northern Ireland, as well as a civil parish. It is the ecclesiastical capital of Ireland – the seat of the Archbishops of Armagh, the Primates of All Ireland for both the Roman Catholic Church and the Church of Ireland. In ancient times, it and nearby Navan Fort (Eamhain Mhacha) was one of the great royal capitals of pagan Gaelic Ireland. Today it is home to two cathedrals and the Armagh Observatory.

Although classed as a medium-sized town,[3] Armagh was given city status in 1994 and Lord Mayoralty status in 2012, both by Queen Elizabeth II. It had a population of 14,749 people in the 2011 Census,[4] making it the least-populated city in both Northern Ireland and on the island of Ireland, and the fourth smallest in the United Kingdom.

Eamhain Mhacha (or Navan Fort), at the western edge of Armagh, is believed to have been used as an ancient pagan ritual or ceremonial site. According to Irish mythology it was once the capital of Ulster, until it was abandoned during the 1st century. The site was named after the goddess Macha, and as the settlement grew on the hills nearby, it was also named after the goddess – Ard Mhacha means "Macha's height". This name was later anglicised as Ardmagh,[5][6] which eventually became Armagh.

According to tradition, when Christianity spread to Ireland during the mid-5th century, Armagh became the island's "ecclesiastical capital", as Saint Patrick established his principal church there. Saint Patrick was said to have decreed that only those educated in Armagh could spread the gospel. According to the Annals of the Four Masters, in the year 457:

Ard Mhacha was founded by Saint Patrick, it having been granted to him by Daire, son of Finnchadh, son of Eoghan, son of Niallan. Twelve men were appointed by him for building the town. He ordered them, in the first place, to erect an archbishop's city there, and a church for monks, for nuns, and for the other orders in general, for he perceived that it would be the head and chief of the churches of Ireland in general. 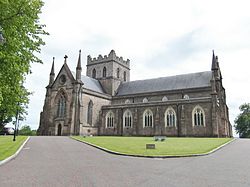 In 839 and 869, the monastery in Armagh was raided by Vikings. As with similar raids, their goal was to acquire valuables such as silver, which could often be found in churches and monasteries.

The Book of Armagh came from the monastery. It is a 9th-century Irish manuscript now held by the Library of Trinity College, Dublin (ms 52). It contains some of the oldest surviving specimens of Old Irish.

Brian Boru is believed to be buried in the graveyard of the St. Patrick's Church of Ireland cathedral. After having conquered the island during the 990s, he became High King of Ireland in 1002, until his death in 1014. 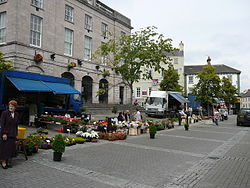 Armagh has been an educational centre since the time of Saint Patrick, and thus it has been referred to as "the city of saints and scholars". The educational tradition continued with the foundation of the Royal School in 1608 and the Armagh Observatory in 1790. This was part of the Archbishop's plan to have a university in the city. This ambition was finally fulfilled, albeit briefly, in the 1990s when Queen's University of Belfast opened an outreach centre in the former hospital building.

Three brothers from Armagh died at the Battle of the Somme during World War I. None of the three has a known grave and all are commemorated on the Thiepval Memorial to the Missing of the Somme. A fourth brother was wounded in the same attack.

On 14 January 1921, during the Irish War of Independence, a Royal Irish Constabulary (RIC) sergeant was assassinated by the Irish Republican Army (IRA) in Armagh. He was attacked with a grenade as he walked along Market Street and later died of his wounds.[8] On 4 September 1921, republican leaders Michael Collins and Eoin O'Duffy addressed a large meeting in Armagh, which was attended by up to 10,000 people.[9]

Further information: The Troubles in Armagh

During The Troubles in Armagh, County Armagh, Northern Ireland, the violence was substantial enough for the city to be referred to be some as "Murder Mile". Over the span of 20 years, 24 individuals were killed in 13 different incidents. 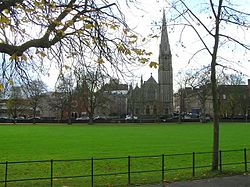 Armagh, like most of Ireland, has a temperate maritime climate (Cfb) according to the Köppen climate classification system. The nearest Met Office standard weather station, at Armagh Observatory, provides long term weather data back to 1844. During that time, the highest temperature to be recorded was 30.3 °C (86.5 °F) on 10 July 1934.[10] The lowest temperature was −15.1 °C (4.8 °F) on 7 February 1895.[11] 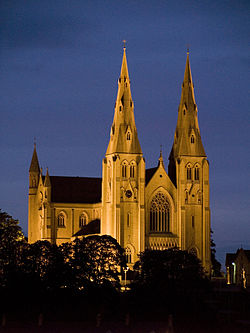 Armagh is the site of two cathedrals, both on hills and both named after Saint Patrick. The Church of Ireland cathedral dates back to around 445. The present-day, post-Reformation, Roman Catholic cathedral was constructed during the latter half of the 19th century and features twin 64m spires, making it the tallest such structure in the county. Armagh is one of the few cities in the world which is home to two cathedrals of the same name.

Armagh has a Georgian area of heritage importance. Perhaps one of the more well known of the buildings is the former women's prison.[17] The construction of Armagh Gaol began in 1780 and was extended in the 1840s and 1850s. The front façade of the prison was built in the Georgian style, while the later development, based on the design of Pentonville (HM Prison), is Victorian.[17] For most of its working life it was a women's prison although not exclusively so. Armagh Gaol was the primary women's prison in Northern Ireland. In 1986 the prison closed and its prisoners were transferred to the new prison at Maghaberry.[17]

The city is home to the Armagh Observatory, founded in 1790, and to the Armagh Planetarium, established in 1968 to complement the research work of the Observatory. The palace of the Archbishop of Armagh is now the local council offices and, along with the archbishop's private chapel, is open to the public. The Palace Stables heritage centre is a reconstructed stable block dating from the 18th century, which was once part of the Archbishop's estate.

Among the city's chief glories is the public library on Abbey Street. Founded in 1771 by Archbishop Richard Robinson (later Lord Rokeby), using his own library as its nucleus. It is especially rich in 17th- and 18th-century books in English, including Dean Jonathan Swift's own copy of the first edition of his Gulliver's Travels with his manuscript corrections.

Armagh Market House was built in 1815 as a two-storey five-bay building, and is currently used as a library.

Armagh County Museum is the oldest county museum in Ireland. The building dates from 1833 and was originally a school house. It was opened as the County Museum in 1937. 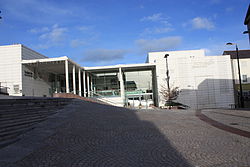 The Marketplace Theatre and Arts Centre

To combat the problem of a diminishing city centre and to address the concerns of local people, Armagh City and District Council decided to upgrade the surfaces and general appearance of the main shopping areas.

The scheme aims to deal with the many issues raised by the public and businesses over recent years. It will regenerate the centre of Armagh, transforming it into a high-quality pedestrian-friendly environment. The ineffective pedestrian area in Market Street will be opened officially to vehicles. The scheme will provide wider footpaths, pedestrian crossings and disabled parking throughout the city centre to improve safety and accessibility.

As well as these new street layouts the appearance of the city centre will be enhanced by new lighting, paving, seating, bins and greenery. The use of quality stone materials, public art projects and feature lighting will contribute to the overall effect and present the city's famous architecture at its best. A shop frontage scheme will be launched toward the end of the street development project.

The £5m Armagh City Centre Regeneration Scheme is funded by Armagh City and District Council, the Department for Social Development, Transport NI and the Arts Council of Northern Ireland.

The city is run by Armagh City and District Council, headquartered in Armagh, which covers a larger area than just the city, but not the entire county. Together with part of the district of Newry and Mourne, it forms the Newry & Armagh constituency for elections to the Westminster Parliament and Northern Ireland Assembly. The Member of Parliament is Conor Murphy of Sinn Féin, who is a former Provisional Irish Republican Army prisoner and a member of the Sinn Féin negotiations team. He won the seat in the United Kingdom general election, 2005, after the retirement of long-serving SDLP MP Seamus Mallon.

The Southern Education and Library Board and the Southern Health and Social Services Board have their headquarters in the city, which has a long reputation as an administrative centre.

The secretariat of the North/South Ministerial Council is based in Armagh, and consists jointly of members of the civil services of both Northern Ireland and the Republic of Ireland. 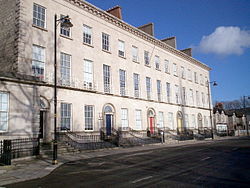 Former houses on Charlemont Place, beside The Mall, now occupied by the Southern Education & Library Board

The partition of Ireland in 1922 hastened the railways' decline, and the GNR closed the Keady – Castleblayney section of the CKA in 1923.[23] The GNR withdrew passenger trains from the Armagh – Keady section of the CKA in 1922 and closed the Armagh – Markethill section of the N&A in 1933.[23] The Government of Northern Ireland forced the GNR Board to close all remaining lines serving Armagh railway station on 1 October 1957: the goods branch from Armagh to Keady and the main line through Armagh from Portadown as far as the border at Glaslough on the way to Monaghan.[23][24]

Government Minister for the Department for Regional Development, Danny Kennedy MLA has indicated plans to restore the railway from Armagh station to Portadown.[25] 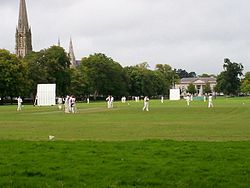 Armagh's Mall is home to the Armagh Cricket Club, and has also staged international matches.

Armagh City Football Club, which plays in the NIFL Championship is the main association football club, and the City of Armagh Rugby Club is the local rugby club. Lisanally Rangers F.C. is another football team, playing in the Mid-Ulster Football League. Gaelic football is represented by Armagh Harps and Pearse Ógs. The local GAA handball club is Eugene Quinn's, named after a player from the Armagh area who died on an attempted swim from Tory Island to the coast of Donegal. The local hurling club is Armagh Cúchulainns.

In 2004 the Royal School, Armagh became only the second team in history to win both the schools' rugby and hockey cups in the same year.

The Mall in Armagh has a long association with cricket, and is the location of the Armagh Cricket Club clubhouse.

Armagh Athletics Club was founded in 1969. The club organises the Armagh International 5k Road Race annually. The race was first organised in 1980 and takes place every February with athletes coming from England, Scotland, Wales, continental Europe and the United States.

Armagh is within the civil parish of Armagh. Like the rest of Ireland, this parish has long been divided into townlands, whose names mostly come from the Irish language. Over time, more townlands have been built upon and they have lent their names to many streets, roads and housing estates.

In 1830, most of Armagh's urban townlands were amalgamated (for administration) and became known as Corporation Lands or simply Corporation.[26] However, the surrounding townlands remained as separate units and they were eventually built upon too. They are listed below alongside their likely etymologies.[5][27]

Only people who are sufficiently notable to have individual entries on Wikipedia have been included in the list and, in each instance, their birth or residence has been verified by citations. 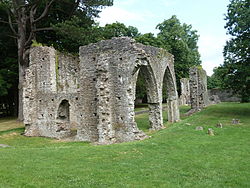 The remains of Armagh's Franciscan friary