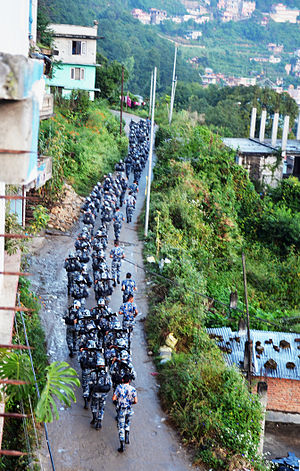 The Armed Police Force of Nepal is a paramilitary force tasked with counter-insurgency operations in Nepal. It functions as a semi-military wing, and occupies a sort of dual role as both military and law enforcement. Service is voluntary and the minimum age for enlistment is 18 years. Initially founded with a roster of 15,000 police and military personnel, the Armed Police Force is projected to have a corps of 40,000 at the close of 2015.

In February 1996, the ideologically Maoist Communist Party of Nepal operating as the United People's Front of Nepal initiated what was then dubbed the "People's War". Ensuing armed resistance and criminal activity escalating from the conflict motivated King Gyanendra to consider amassing an independent police force. Subsequently, the Armed Police Force was founded on the 24th of October 2001. Late Krishna Mohan Shrestha of the Nepal Police (then serving as Additional Inspector General of Police) was its first Chief.

The current command and control organization of Nepal's army is outlined along the protocol of the 1990 Constitution and its interim constitution. Its standing Inspector General is the Chief of Armed Police Forces, equivalent in rank to a three star Lieutenant General of the Nepal Army.

The Armed Police Force is a paramilitary force organized as combat brigades. Each combat brigade is responsible for one of the five regions and Kathmandu Valley in the country. APF for its origin and given mandated tasks is a dynamic organization in a sense that multi facet jobs resembling to military and police are embodied into one.

Senior Superintendents are the regional level commanders for training colleges located at five regions with status of principal.

An infantry battalion commanded by a Superintendent (SP) comprises rifle companies, support company and an administrative company. Deputy Superintendents (DSP) command the companies and the Inspectors command platoons. Sub Inspectors are the platoon second in command. A platoon consists of three sections and a Senior Head Constable (SHC) commands each section.

The brigadier generals command all the support brigades. Each brigade is responsible for the training, posting and promotion of the other ranks. Each brigade commander is also responsible to advise the IG on matters pertaining to his respective brigade and region.

The fundamental ethos of the Armed Police Force (APF) is PEACE SECURITY COMMITMENT.

In November 2001, the Nepalese armed forces began military operations against the Communist Party of Nepal (Maoist). And Armed Police Force has involved in this operations with the birth of is organization alongside with Nepal Army.

Allegations of war crimes and human rights abuses have been leveled by the media against members of the Armed Police Force.

Armed Police Force takes pride in contributing its soldiers in peacekeeping efforts under the coveted blue flag of the United Nations for global peace and security as a whole. Armed Police force involved UN Peace keepings missions are now 32 and more than 2000 armed police force personal has contribute on the mission.

Also the APF has its remarkable contributions with advisers, trainers, monitors and in contingents of FPUs in missions like Iraq (UNGCI), Kosovo (UNMIK), Liberia (UNMIL), Sierra Leone (UNAMSIL), Haiti (MINISTAH), Sudan (UNMIS) and South Sudan (UNMISS). APF has two Formed APF Units each of 120 personnel in Liberia (UNMIL) since December 2003.

This article contains material from the official website of Armed Police Force of Nepal[unreliable source?]