From Infogalactic: the planetary knowledge core
(Redirected from Armor-piercing shot and shell)
Jump to: navigation, search 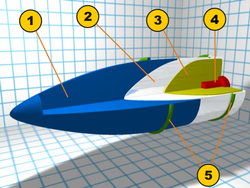 An armor-piercing (AP) shell is a type of ammunition designed to penetrate armor. From the 1860s to 1950s, a major application of armor-piercing projectiles was to defeat the thick armor carried on many warships. From the 1920s onwards, armor-piercing weapons were required for anti-tank missions. "Shots" and "shells" are typically artillery projectiles, and are used to defeat heavily armored targets such as tanks, bunkers and armored warships. Projectiles smaller than 20mm are typically known as "armor-piercing ammunition", and are intended for lightly-armored targets such as body armor, bulletproof glass and other protection, or for use as an anti-matériel round.

An armor-piercing shell must withstand the shock of punching through armor plating. Shells designed for this purpose have a greatly strengthened case with a specially hardened and shaped nose, and a much smaller bursting charge. Some smaller-caliber AP shells have an inert filling, or incendiary charge in place of the HE bursting charge. The AP shell is now little used in naval warfare, as modern warships have little or no armor protection, but it remains the preferred round in anti-tank warfare, as it has a greater "first-hit kill" probability than a high explosive anti-tank (HEAT) round, especially against a target with composite armor, and because of higher muzzle velocity, is also more accurate than a HEAT round.[citation needed]

The late 1850s saw the development of the ironclad warship, which carried wrought iron armor of considerable thickness. This armor was practically immune to both the round cast-iron cannonballs then in use and to the recently developed explosive shell. The first solution to this problem was effected by Major Sir W. Palliser, who, with the Palliser shot, invented a method of hardening the head of the pointed cast-iron shot.[lower-alpha 1] By casting the projectile point downwards and forming the head in an iron mold, the hot metal was suddenly chilled and became intensely hard (resistant to deformation through a Martensite phase transformation), while the remainder of the mold, being formed of sand, allowed the metal to cool slowly and the body of the shot to be made tough (resistant to shattering).

These chilled iron shots proved very effective against wrought iron armor, but were not serviceable against compound and steel armor, which was first introduced in the 1880s. A new departure therefore had to be made, and forged steel rounds with points hardened by water took the place of the Palliser shot. At first, these forged-steel rounds were made of ordinary carbon steel, but as armor improved in quality, the projectiles followed suit.

During the 1890s and subsequently, cemented steel armor became commonplace, initially only on the thicker armor of warships. To combat this, the projectile was formed of steel—forged or cast—containing both nickel and chromium. Another change was the introduction of a soft metal cap over the point of the shell – so called "Makarov tips" invented by Russian admiral Stepan Makarov. This "cap" increased penetration by cushioning some of the impact shock and preventing the armor-piercing point from being damaged before it struck the armor face, or the body of the shell from shattering. It could also help penetration from an oblique angle by keeping the point from deflecting away from the armor face.

Shot and shell used prior to and during World War I were generally cast from special chromium (stainless) steel that was melted in pots. They were forged into shape afterward and then thoroughly annealed, the core bored at the rear and the exterior turned up in a lathe. The projectiles were finished in a similar manner to others described above. The final, or tempering treatment, which gave the required hardness/toughness profile (differential hardening) to the projectile body, was a closely guarded secret.

The rear cavity of these projectiles was capable of receiving a small bursting charge of about 2% of the weight of the complete projectile; when this is used, the projectile is called a shell, not a shot. The HE filling of the shell, whether fuzed or unfuzed, had a tendency to explode on striking armor in excess of its ability to perforate. 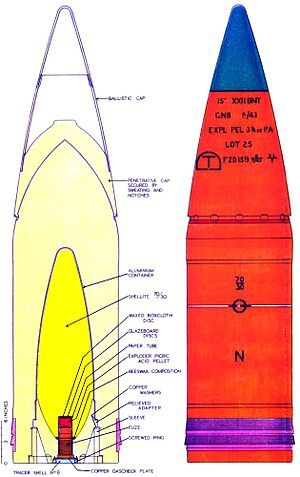 During World War II, projectiles used highly alloyed steels containing nickel-chromium-molybdenum, although in Germany, this had to be changed to a silicon-manganese-chromium-based alloy when those grades became scarce. The latter alloy, although able to be hardened to the same level, was more brittle and had a tendency to shatter on striking highly sloped armor. The shattered shot lowered penetration, or resulted in total penetration failure; for armor-piercing high-explosive (APHE) projectiles, this could result in premature detonation of the HE filling. Highly advanced and precise methods of differentially hardening the projectile were developed during this period, especially by the German armament industry. The resulting projectiles gradually change from high hardness (low toughness) at the head to high toughness (low hardness) at the rear and were much less likely to fail on impact.

APHE shells for tank guns, although used by most forces of this period, were not used by the British. The only British APHE projectile was the Shell AP, Mk1 for the 2 pdr anti-tank gun and this was dropped as it was found that the fuze tended to separate from the body during penetration. Even when the fuze didn’t separate and the system functioned correctly, damage to the interior was little different from the solid shot, and so did not warrant the additional time and cost of producing a shell version. APHE projectiles of this period used a bursting charge of about 1–3% of the weight of the complete projectile, the filling detonated by a rear mounted delay fuze. The explosive used in APHE projectiles needs to be highly insensitive to shock to prevent premature detonation. The US forces normally used the explosive Explosive D, otherwise known as ammonium picrate, for this purpose. Other combatant forces of the period used various explosives, suitably desensitized (usually by the use of waxes mixed with the explosive).

Due to the increase in armor thickness during the conflict, the projectiles’ size and impact velocity had to be increased to ensure perforation. At these higher velocities, the hardened tip of the shot or shell has to be protected from the initial impact shock, or risk shattering. To raise the impact velocity and stop the shattering, they were initially fitted with soft steel penetrating caps. The best performance penetrating caps were not very aerodynamic, so an additional ballistic cap was later fitted to reduce drag. The resulting projectile types were named armor-piercing capped (APC) and armor-piercing capped ballistic capped (APCBC).

Early WWII-era uncapped AP projectiles fired from high-velocity guns were able to penetrate about twice their caliber at close range (100 m). At longer ranges (500-1,000 m), this dropped 1.5–1.1 calibers due to the poor ballistic shape and higher drag of the smaller-diameter early projectiles. Later in the conflict, APCBC fired at close range (100 m) from large-caliber, high-velocity guns (75–128 mm) were able to penetrate a much greater thickness of armor in relation to their caliber (2.5 times) and also a greater thickness (2–1.75 times) at longer ranges (1,500–2,000 m).

Tungsten compounds such as tungsten carbide were used in small quantities of inhomogeneous and discarded sabot shot, but that element was in short supply in most places.

Armor-piercing solid shot for cannons may be simple, or composite, solid projectiles but tend to also combine some form of incendiary capability with that of armor-penetration. The incendiary compound is normally contained between the cap and penetrating nose, within a hollow at the rear, or a combination of both. If the projectile also uses a tracer, the rear cavity is often used to house the tracer compound. For larger-caliber projectiles, the tracer may instead be contained within an extension of the rear sealing plug. Common abbreviations for solid (non-composite/hardcore) cannon-fired shot are; AP, AP-T, API and API-T; where "T" stands for "tracer" and "I" for "incendiary". More complex, composite projectiles containing explosives and other ballistic devices tend to be referred to as armor-piercing shells.

Armor-piercing shells as dedicated anti-tank projectiles are common in over 50mm caliber artillery but the tendency is to use semi-armor-piercing high-explosive (SAPHE) shells, which have less anti-armor capability, but far greater anti-materiel/personnel effects. The modern SAPHE projectiles still have a ballistic cap, hardened body and base fuze, but tend to have a far thinner body material and higher explosive content (4–15%). Common abbreviations for modern AP and SAP shells are: HEI(BF), SAPHE, SAPHEI, and SAPHEI-T.

Armor-piercing rifle and pistol cartridges are usually built around a penetrator of hardened steel, tungsten, or tungsten carbide, and such cartridges are often called 'hard-core bullets'. Aircraft and tank rounds sometimes use a core of depleted uranium. The penetrator is a pointed mass of high-density material that is designed to retain its shape and carry the maximum possible amount of energy as deeply as possible into the target. Depleted-uranium penetrators have the advantage of being pyrophoric and self-sharpening on impact, resulting in intense heat and energy focused on a minimal area of the target's armor. Some rounds also use explosive or incendiary tips to aid in the penetration of thicker armor. High Explosive Incendiary/Armor Piercing Ammunition combines a tungsten carbide penetrator with an incendiary and explosive tip.

Rifle armor-piercing ammunition generally carries its hardened penetrator within a copper or cupronickel jacket, similar to the jacket which would surround lead in a conventional projectile. Upon impact on a hard target, the copper case is destroyed, but the penetrator continues its motion and penetrates the target. Armor-piercing ammunition for pistols has also been developed and uses a design similar to the rifle ammunition. Some small ammunition, such as the FN 5.7mm round, is inherently capable at piercing armor, being of a small caliber and very high velocity.

The entire projectile is not normally made of the same material as the penetrator because the physical characteristics that make a good penetrator (i.e. extremely tough, hard metal) make the material equally harmful to the barrel of the gun firing the cartridge.

Most modern active protection systems (APS) are unlikely to be able to defeat full-caliber AP rounds fired from a large-caliber anti-tank gun, because of the high mass of the shot, its rigidity, short overall length, and thick body. The APS uses fragmentation warheads or projected plates, and both are designed to defeat the two most common anti-armor projectiles in use today: HEAT and kinetic energy penetrator. The defeat of HEAT projectiles is accomplished through damage/detonation of the HEAT's explosive filling or damage to the shaped charge liner or fuzing system, and defeat of kinetic energy projectiles is accomplished by inducing yaw/pitch or fracturing of the rod.